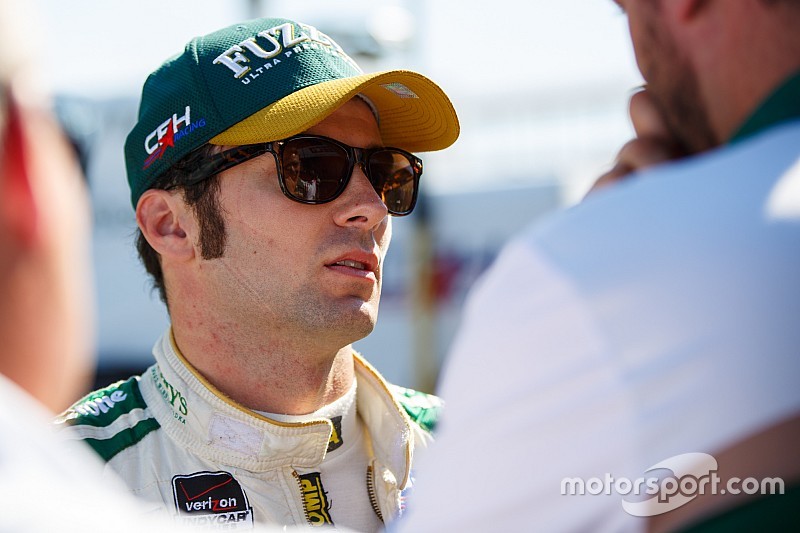 Veteran IndyCar team owner Dale Coyne says he’s still in discussion with six drivers about his second full-time ride in 2016, but believes a deal with Luca Filippi could be imminent.

Coyne told Motorsport.com: “Luca is good, he was comfortable in an IndyCar right away back in 2013, and I’d say he’s been impressive since.

“So we’ve had serious talks and I think he would be a good fit for the team."

Coyne said he had no misgivings over the fact that Filippi has yet to race on an oval.

“That hasn’t been out of choice,” said Coyne, “that was just the deal he had with Ed. Luca has driven an IndyCar on an oval – Iowa, I think it was – and he seems keen and enthusiastic about the whole idea."

Conor Daly was announced as a full-time Dale Coyne Racing driver last December, but Coyne has been seeking to fill the second seat ever since. He emphasized that a deal with Filippi, who was runner-up in GP2 in 2011, could still not be confirmed.

“I’d say I still have six contenders for the seat,” he said, “and in terms of previous IndyCar experience, they range from yes to no. Some are previous drivers of ours.

“We plan to run both cars at the [Phoenix] test next week, but I don’t know if the deal will be done by then.”

Coyne did also admit that he has been in contact with Gabby Chaves, who lost his ride in the Andretti-BHA merger.

Dale Coyne Racing ran a total of seven drivers last season and seven in 2013. But in 2014, Coyne employed just three, which included a one-off third car for Pippa Mann at the Indy 500.

His two full-timers then were the late Justin Wilson and Carlos Huertas, the latter of whom benefited from Coyne’s bold strategy in changing track conditions at Houston to earn the the Plainfield, Ill.-based team its fourth IndyCar victory.

Coyne says he is aiming for a similarly consistent driver lineup to become the norm for his team and admitted that, ironically, this requirement has ruled out his last winner, who appeared to have no appetite for ovals.

“Yeah, Carlos was not on the list,” said Coyne. “We want one driver for the whole year in that car, so they have to be able to cope with the variety of IndyCar tracks.

“We want drivers who have something to prove at this level, on all types of track.”

Asked if that had pushed him more in the direction of an IndyCar rookie or sophomore, rather than a veteran, Coyne said: “Yes, definitely.”

Coyne confirmed that Tristan Vautier, who starred for DCR on several occasions in 2015 and was hoping to return with the team, has been on his wishlist but that budget issues had taken him largely out of the equation.

Said Coyne: “I was very impressed with Tristan last year, and I went to see him in [Rolex 24 at] Daytona. But signing Tristan would mean starting from scratch, money-wise, and we do need someone who can bring part of the budget.

“We’d been working and working at that with Tristan, but it wasn’t going to happen in time."