Subscribe
Previous / “Insane” lapped-car rule has an “easy fix”, says Power Next / Bourdais committed to Foyt: “If I can help, I want to stay”
IndyCar News

Dale Coyne says that former Formula 1 driver Alex Albon is interested in coming to IndyCar, and that Romain Grosjean has boosted other drivers’ interest in his team and also the series.

Albon, who scored two Formula 1 podium finishes for Red Bull Racing last year before being replaced by Sergio Perez, is currently in DTM. But he made a name for himself in junior formulas, where he finished second only to current Ferrari ace Charles Leclerc in GP3, while in Formula 2 he was third in the championship behind George Russell and Lando Norris.

The British-Thai driver was at Indianapolis Motor Speedway last weekend, visiting with various teams in the IndyCar paddock.

“Yeah, Alex was talking to lots of people,” said Coyne, who for the second time this year saw rookie Grosjean drive his #51 entry to a runner-up finish. “He’s been on our radar for a while and we’ve been speaking with him for over a year now and he’s interested, for sure.

“Romain [Grosjean] is a great salesman for us, showing what we can do as a team, but he’s also the best salesman for IndyCar. Him and Alex talked together for quite a while.

“They talked about how nice it is in the series, how competitive you can be in these cars, what they’re like to drive –natural, instinctive, so you can get on it straight away, like we saw from [Christian] Lundgaard.

“Romain was telling him it was fun to be in IndyCar, a lot of less pressure, better relationships between teams, team owners, and between drivers. And I think Alex appreciates that the teams here aren’t set up to have one guy as number one and the other as the bridesmaid. That’s something Alex has been through, right?

“It’s different here. If your two guys have two different driving styles, you can generally change each car to suit its driver. Now, that might hurt a bit if they’re very different – their feedback isn’t going to help the other one so much. There’s more work. And one driving style and engineering philosophy may suit a track better than the other.

“But if having them on different setups helps get the best out of each driver individually, then you can do that in IndyCar. We’ve had it that way before, we think we’re pretty good at it and it can work out well.

“So anyway, I think if they’re used to the pressure of Formula 3, 2 and especially Formula 1, drivers find IndyCar a breath of fresh air. The hard work is what’s done on track, in pitlane and in the engineering trailer. There’s not the politicking and pressure.”

Asked if Albon would come with Honda money or Red Bull money, Coyne replied: “I don’t think so, but we haven’t gone into that detail yet. He was just talking with lots of people, enjoying the weekend.

Coyne also spurned the idea that Lundgaard’s fourth place on the grid for Rahal Letterman Lanigan on his debut had called into question the quality of the IndyCar regulars.

“Lundgaard’s a talented kid – he won in Formula 3 and Formula 2, right? And there’s a reason he’s been picked for that [Alpine] Academy. He’s been a winner in basically one-make series.

“So I don’t think it’s surprising if a driver like that comes here and shines. Go back through history and you’ll see that talented guys have joined IndyCar and if they feel confident and can learn quick, and don’t make mistakes, they can make a good impression. And at a track that’s more like a European track than any other track we run at… no, I don’t think anyone should be shocked by the guy’s speed.

“Having said that, it’s a good wake-up call to the drivers already here that you’ve got to be enthusiastic and hungry and after it, because there’s talented youth who are gonna get frustrated in Europe trying to make it to F1 and they’ll quit that, come knocking on doors over here.

“Lundgaard’s lack of experience in IndyCar – experience of our tires, probably – is what showed up on race day. But anyway, he was on a different mission than his teammates. He was trying hard but in the back of his mind he also he didn’t want to be ‘that guy’, the one who crashes out of his first race. He was here to gain experience and that’s what he did.

“But if he wants to come over here and works hard and learns, I’m sure he’ll be good.” 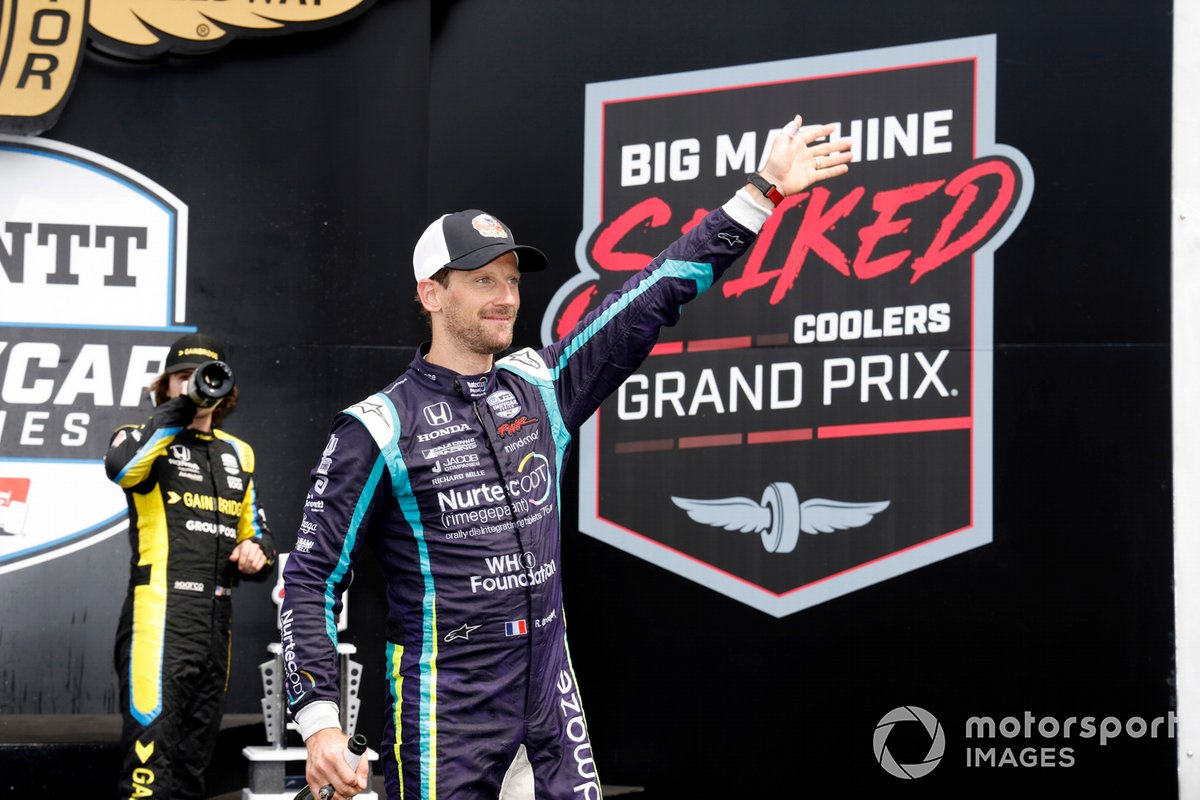 Coyne also said he was pleased with Saturday’s top three finishers at IMS for the Big Machine Spiked Coolers Grand Prix – winner Team Penske’s Will Power, his own driver Grosjean in second and Colton Herta of Andretti Autosport in third. He said: “Yeah, that was good, well deserved. They all needed that result, for different reasons.”

But he believes that Grosjean missed out on victory due to qualifying ‘only’ third on Friday, in a session in which Pato O’Ward, Power, Grosjean, Lundgaard and Herta were covered by a mere 0.05sec.

“But second was good. He was happy, we were happy.”