Conway returns to Dale Coyne Racing for Toronto and Houston

Detroit pole and race winner Mike Conway has time off from his ride WEC ride which leaves him free to contest both the Toronto Indy and the Houston IndyCar race for Dale Coyne Racing.

London, UK - MB Partners, who represents the talented British driver Mike Conway, announced today they have signed a deal with Dale Coyne Racing to put Conway in their second entry for both IndyCar double-header races, the Honda Indy Toronto (13-14 July) and the Grand Prix of Houston (5-6 October).

Conway, 29, will be driving the No. 18 Sonny’s BBQ car, which he last drove at the Chevrolet Indy Dual in Detroit back in June. Having not been in a car since Long Beach, Conway showed his street course talent by winning the first race and becoming the only driver to secure podium finishes in both races. Not only did he achieve this but also earned his first IndyCar career pole for the second race, which happened to be Dale Coyne Racing’s first also. 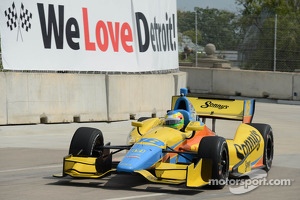 “I am very happy to back in an IndyCar and with Dale Coyne Racing”, said Conway. “Hopefully we will pick up from where we left off in Detroit. Toronto is one of my favourite circuits so there is no reason why we can’t do well there. Houston will be new to a lot of people, however Dale Coyne and my teammate Justin (Wilson) raced there in ChampCar so I am hoping to get some good feedback from them! They should both be really good weekends and I want to thank Dale for giving me another chance to be a part of it.”

This weekend at Toronto will be Conway's 57th IndyCar start and has achieved 15 top-10 finishes, five top-fives and two wins. In the three starts he has made this year he has had two podiums including a win and one pole.

When Conway isn’t with IndyCar he is racing full time in the World Endurance Championships back in Europe with Delta-ADR.

Hinchcliffe ready for his home races in Toronto