Conor Daly is next in line for IndyCar 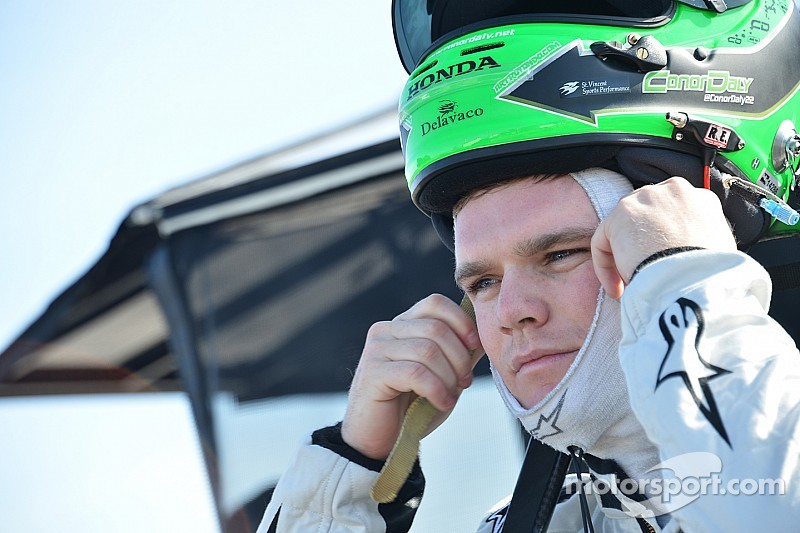 After a massively successful test at Sebring that saw the 23-year-old match James Hinchcliffe's time in a team car, after two years away from IndyCar, Conor Daly feels he is at the top of the call list.

He is one of the hardest working drivers (not) in IndyCar. And after a solid performance testing in a Schmidt Peterson Motorsports car at Sebring last week, Daly feels he is on the shortlist for seats in the IndyCar series.

"Sam always knew what I could do after that short stint with his team," Daly told Motorsport.com.

"We always kept in touch. We came to an agreement for that test just to get me back in the seat."

Without a driver or sponsor on the #7 Schmidt-Peterson Motorsports car, Daly, some driver friends including Marco Andretti and Hinchcliffe, business partners and sponsors came together to ensure the young driver gets his shot.

Just getting a test is tough

Daly spent some time in GP2 and GP3 cars in Europe, but his heart lies in IndyCar. He said just getting in a seat for a test is a big enough challenge in today's age of pay-drivers, and he was going to leave everything he had in Sebring.

"It was essentially the biggest test of my life, the biggest day in a race car. I look forward to those situations and the chances to prove to myself," said Daly.

"I texted my dad after the day was over, and I said it was probably the best day I'v had in a race car ever. No mistakes, went fast, did what the team needed me to do. I checked all the boxes. For me it was big. It was just a day in the car, but it puts you so much closer to the game and putting you in play."

In the end, his times impressed. He came in right on pace with the newly signed and IndyCar race-winner James Hinchcliffe.

The Canadian Schmidt Peterson driver said that Daly went above and beyond what anyone expected of him, adding that he has "always had faith in him as a driver, he even impressed me (at the test). He made a statement for the fact that he belongs in IndyCar."

"Marco (Andretti) and I are of the same opinion that we would like to see IndyCar as great as it can be, and step one for that to happen is to have the best drivers in the series," 'Hinch told Motorsport.com.

"We both have a lot of faith in what conor can bring to the table on and off the track. I think we both kind of look at him as a little brother. We have both been there, we have been been the Lights driver, the almost Indycar driver trying to get that break."

Pagenaud: "With Will there is respect"