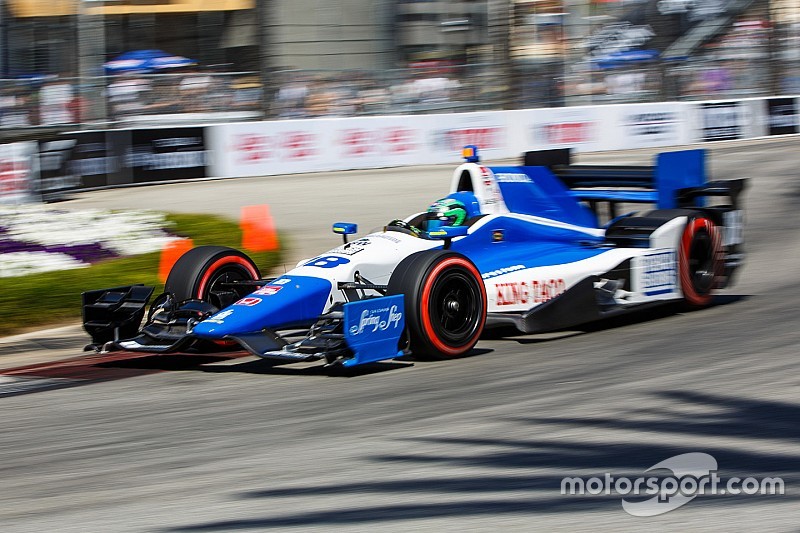 “Both Dale and I are willing to do whatever it takes to make this happen,” says American hopeful seeking his first full-season IndyCar contract

Conor Daly says he’s the most confident he’s ever been of landing a full-time IndyCar seat, and believes Dale Coyne Racing is by far his most promising option.

The Noblesville, Ind.-born racer, who has made six IndyCar starts with three teams over the past three seasons, told Motorsport.com: “Ever since I raced for Dale at Long Beach, I’ve been talking a lot with him and the boys in his team. I really like him, [race engineer] Michael Cannon and the rest of them, and that would be a great team to race for.

“I’ve got nothing solid to say yet, but recently I’ve been talking a lot with Dale, and there’s serious potential there. We’ve made a lot of progress, and there are definitely far more positives this early in the off-season than we’ve ever had before. I’m a lot more confident than I’ve ever been in early December!”

Daly opened a lot of eyes with his performance in wickedly variable track conditions at Detroit this year, while he stood in for the injured James Hinchcliffe at Schmidt Peterson Motorsport. Team owner Sam Schmidt was notably impressed with Daly’s sixth place finish and sung the youngster’s praises in a recent interview with Motorsport.com. However, the return of Mikhail Aleshin has ruled out SPM as an option for Daly.

“It would have been awesome to be teammates with James [Hinchcliffe] next year,” admitted Daly, “but obviously there was a budget number needed at Schmidt’s and I don’t have it. All I can say is that I loved driving for that team for a few races this year.”

He went on: “Between what I can bring and what the team needs, there’s also a big gap money-wise at Andretti Autosport and at KV Racing… although Kevin [Kalkhoven] and Jimmy [Vasser] let me drive their old Panoz Champ Car DP01, so I’ll be forever grateful to those guys!”

Daly said it was simple budgetary reasons, too, that ended his four-year attempt to climb the European ladder to Formula 1, the high point being third place in the 2013 GP3 championship, driving for ART GP.

The 25-year-old stated: “The thing that kept me over there was having the money to do it – scholarship one year and then having Force India putting me on a contract and paying for my racing. So when that ended, so did my European career.

“Europe was awesome and there was great racing, but I think it’s much more fair in IndyCar in that you can go racing with any team on the grid and make an impression. Being with a mid-pack team in GP2 doesn’t do anything for you, whichever driver you are; you’ve got to be with one of the two or three best teams. Whereas in IndyCar, whether you’re with Dale Coyne or Chip Ganassi, you’ve got a good car and therefore a much better shot at showing your potential.”

Daly, who made his IndyCar debut with A.J. Foyt Racing in the 2013 Indianapolis 500, said he’s hoping to put the days of part-time deals behind him.

"The only thing that’s going to do anything for my career at this stage is to be at every race, competing hard, showing my worth to the series. And I think the team owners know that, they understand where I’m coming from. Obviously, yeah, I’d race any race I can do, but having a full season is the goal.

“And Dale has made a huge effort to put me in one of his cars for the whole season. That’s important because I haven’t found a high-end sponsor yet. I think both Dale and I are willing to do whatever it takes to make this happen. We don’t know if it will happen, but Dale has taken the initiative himself, and that’s really cool. I’m not finding many team owners who are prepared to do that these days.”