Chevrolet teams ready to race under the lights at Iowa Speedway

DETROIT – June 19, 2012 – One-half of the 2012 IZOD IndyCar Series season is in the record books, and it has been successful for the Chevrolet IndyCar V-6 engine with five victories and 13 podium finishes in eight races. Chevrolet continues to lead the Series’ Manufacturers’ standings, and a Gold Bowtie driver has led the driver’s point standings since the checkered flag flew at race one. 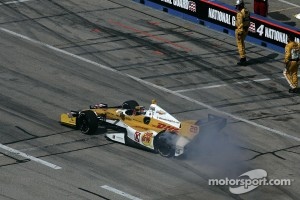 Now up is Iowa Speedway, a .875-mile banked oval. This will be the third consecutive race on an oval, although none of the three (Texas Motor Speedway, Milwaukee Mile and Iowa Speedway) are similar in configuration or length. Coming off a strong performance for Chevrolet at the Milwaukee Mile with a sweep of the top-six finishing positions and eight of the top-10, the Chevy IndyCar V-6 teams are looking to continue to show their strength at the Newton, Iowa track.

"Congratulations to Ryan Hunter-Reay and Andretti Autosport on their win at Milwaukee,” said Chris Berube, Chevrolet Racing Program Manager, IZOD IndyCar Series. “Team Chevrolet heads to Iowa Speedway this week with momentum after last weekend's sweep of the podium by our Chevrolet IndyCar V-6 teams and drivers. Our technical partners in the Chevy IndyCar program have been working tirelessly with the Chevrolet teams, to continue to maximize the performance of the direct injected twin turbo engine. This collaborative effort has resulted in on-track success.”

Located in The Heartland of America, Iowa Speedway will add several new elements for teams, drivers and fans alike. INDYCAR officials have issued a technical bulletin aimed at putting the race back in the hands of the drivers. Teams have been directed a maximum rear flap angle of 37 degrees with no wicker allowed for the Iowa Corn Indy 250 on June 23. The aero package will be identical to the short track package used at the Milwaukee Mile, closely resembling the road/street course aero package. With less downforce, drivers will be working closely with their crews to get the perfect setup under their car as handling becomes even more critical.

Another addition adding a completely new dimension to the competition will be a departure from single-car qualifications. Three heat races will be held June 22 to set the starting grid for the 250-lap race. Qualification groups will be determined by lap times recorded by entries in the second (45-minute) practice session earlier in the day.

"Iowa Speedway presents a new set of challenges for the Chevrolet teams and drivers,” Berube concluded. “It is the last in a grueling stretch of five consecutive races. At just under one-mile, with shorter straightaways and wide, sweeping banked corners, Iowa will require the handling needed on a short track and the power to utilize the banking to full advantage. It will be an exciting race. I am looking forward to seeing the Chevy powered drivers up front battling for the win."

CHEVROLET IN THE IZOD INDYCAR SERIES - FROM THE DRIVER’S SEAT:

WILL POWER, NO. 12 VERIZON TEAM PENSKE CHEVROLET – POINTS LEADER: “We are working hard for a good result for the Verizon car this weekend. I think it is a great move by INDYCAR to reduce the downforce, hopefully that makes it so you really have to earn the victory. We want to finish strong now that we are in the second half of the season.”

JAMES HINCHCLIFFE, NO. 27 TEAM GODADDY.COM ANDRETTI AUTOSPORT CHEVROLET – 2ND IN POINTS: This team has given us good cars at every type of racetrack this year, so having Milwaukee successfully under our belt - the other short oval - we are all excited to get to Iowa. Marco had a good test there last week, and of course won there last year, so that gives us a bit of a boost coming into the weekend. We're just going to try and keep doing what we've been doing with the Go Daddy car - stay consistent and run toward the front. Hopefully we can strengthen our lead in the oval race and narrow the gap with Will (Power) in the overall points.

"Certainly, there's a bit of an unknown going into this race and it'll be interesting to see how it plays out. I think it's cool we're trying something different and we'll see if this format is the right way to do it. We won't know until we get out there and give it a run. It puts a lot of emphasis on practice, especially practice (session) two, which could be unfortunate. You could be quick in practice one and then have a bad second session and be out of luck, which isn't entirely fair. It does change our focus a bit; in practice we are trying to set up for our race cars and be sure we have the best car over a distance. Now for session two we have to focus on making it quick for at least one lap to get into a good group for the heat races. I think everyone is anxious and excited to see how it plays out."

RYAN HUNTER-REAY, NO. 28 TEAM DHL/SUN DROP CITRUS SODA ANDRETTI AUTOSPORT – 4TH IN POINTS: "Marco (Andretti) won there last year, so combined with my win (at Milwaukee), Andretti Autosport really goes in with a lot of momentum. Even though Iowa is a 7/8-mile track, it races a lot more like a mile-and-a-half super speedway than it does a short track. It's high-banked, so it's a reset from Milwaukee, which is flat. You really have to have a super speedway mentality to race there.

"I'm interested to see what we have with the new car and new downforce - we don't know what to expect there (at Iowa). With the qualifying heats, it's going to be mixed-up but we'll make the most of it. It's tough because you'll really have to take it easy and not hurt your race car in a heat race. Marco tested there and said it would be tough to pass, but it's always been that way in the past, and then we start the race and it becomes a 'passfest!'"

TONY KANAAN, NO. 11 GEICO/MOUSER ELECTRONICS KV RACING TECHNOLOGY CHEVROLET – 8TH IN POINTS: "I am looking forward to going back to Iowa. The track suits me and I have always done well there. I am not sure about the heat races for qualifying, but I need to take advantage of my previous experiences and hope that we can be in contention for another podium finish."

RYAN BRISCOE, NO. 2 PPG AUTOMOTIVE REFINISH TEAM PENSKE CHEVROLET – 9TH IN POINTS: “I am excited to take the No. 2 PPG Team Penske car to Iowa where it should be some great racing. After testing there I think everyone found that it was pretty wide open and we should have plenty of action like we saw in Texas and Milwaukee. I am still searching for my first win this year and hopefully this is it.”

JR HILDEBRAND, NO. 4 NATIONAL GUARD PANTHER RACING CHEVROLET – 13TH IN POINTS: “Everybody at Panther is really excited about getting back to Iowa Speedway after we had such a good racecar there last year. That was one of those weekends where we didn’t have a great first practice but the boys worked really hard to help us qualify and run up front all day. This was certainly one of the races we had circled coming into this season. We tested there last week and we felt like it was pretty productive as we were trying to figure out how last year’s setup compared to what we need to put together with the updated car and engine. The qualifying heat races and the low downforce package should make it interesting. Obviously, Milwaukee ended up being a bummer for us, so we’re looking forward to turning that around this weekend.”

E.J. VISO, NO. 5 CITGO/PDVSA KV RACING TECHNOLOGY CHEVROLET – 14TH IN POINTS: “Going to another oval is nice. I had a pretty strong run at Milwaukee, finishing fifth and I am looking forward to going back to Iowa where I have had a podium finish in 2010. We tested there a couple of weeks ago and we believe we learned a lot which we can use for the race. I am sure this weekend will be a continuation of the strong performances we have had this year.”

RUBENS BARRICHELLO, NO. 8 BMC/EMBRASE KV RACING TECHNOLOGY CHEVROLET – 16TH IN POINTS: “After having a competitive weekend at Milwaukee, I hope that the team and I keep up the good form. In previous years there has been good racing at Iowa and I hope this year will be no different.”

MARCO ANDRETTI, NO. 26 TEAM RC COLA ANDRETTI AUTOSPORT CHEVROLET – 18TH IN POINTS: “We are coming (to Iowa) ready to win. We did it last year, and we were really strong in the test (last week at the Iowa Speedway). I need a win now more than ever because we've been fast almost every week, but we just keep having something go wrong. I've been in Iowa a lot lately, doing commercials and traveling across the state promoting E85 ethanol and Iowa Corn, so I'd really love to be able to make it two-in-a-row here Saturday night. It would really mean a lot to me."

ED CARPENTER, NO. 20 FUZZY’S PREMIUM ULTRA VODKA ED CARPENTER RACING CHEVROLET – 20TH IN POINTS: “I always enjoy racing in Iowa and this weekend’s events will be a little bit like my sprint car days with the qualifying heat races. We had a very good test last week at Iowa Speedway. It’s been a tough schedule on the crew with three straight weeks at Indy, then races at Detroit, Texas and Milwaukee and two tests in between there too. Now, we come to Iowa with a confidence to race for the win. Our team has been working so hard to get our Fuzzy’s Vodka Chevrolet in the fight for the win. I think we have a good chance to battle at the front. I wish we could have qualified better at the ovals because our racing setups have been very good. We haven’t received the results with the good charges through the field, but it shows we can be very competitive with the top teams. Now, I think we’ll have a strong effort at Iowa. We’ll bring out our oval chassis for Iowa, as the team has worked overtime to get the crashed car ready to go. It has been a non-stop project to get the oval car ready despite racing each week with the road course car. That poor car has to be pretty tired. So we are excited to bring a new car to Iowa and see what it does.”

KATHERINE LEGGE, NO. 6 TRUECAR DRAGON RACING CHEVROLET, 25TH IN POINTS (RUNNING THE OVAL TRACK RACES IN 2012 FOR DRAGON RACING): “We had two good half-day testing sessions at Iowa Speedway last week and we learned a lot at the Milwaukee race this past weekend. We have a lot of positives going into Iowa with TrueCar and Chevrolet. I am really looking forward to the race and meeting more of the INDYCAR fans in Iowa."

Newgarden likes the challenge of the Iowa oval