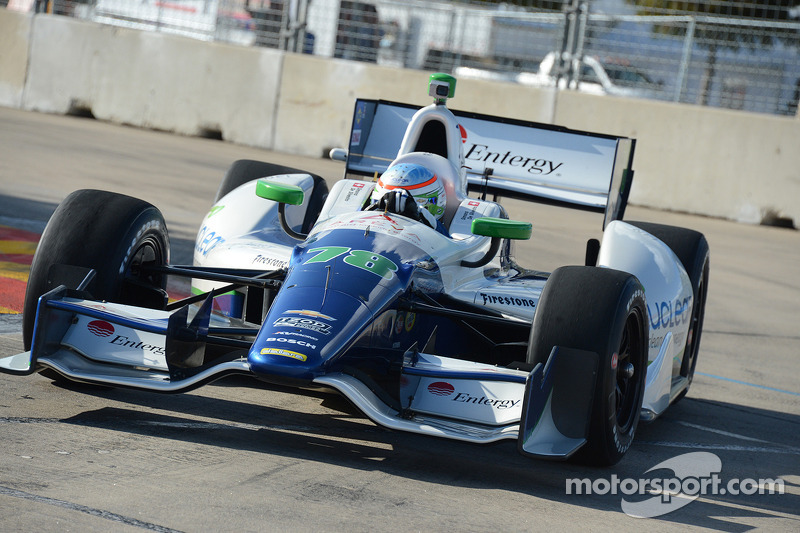 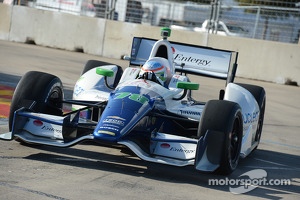 “Finally. We’ve been waiting for this for a long time,” said De Silvestro from the podium. “It seemed like a pretty good car the whole weekend. I qualified up there and then the race went actually pretty good. I really have to thank everybody at KV Racing, and also everybody from the Nuclear Clean Energy campaign for sticking with me. Finally we have our podium. Hopefully tomorrow we can even better it.” 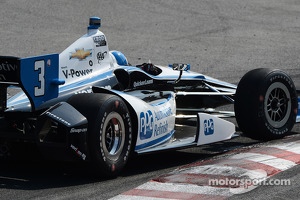 Helio Castroneves, No. 3 Shell V-Power/Pennzoil Ultra Team Penske Chevrolet, came into today’s race leading the point standings by 49 points. However, on lap 23 Castroneves slowed on the track, and nursed it to pit lane with a shifting problem. Castroneves returned to competition on lap 32, nine laps down to the leader. Additional problems plagued the team for the remainder of the 90-lap race, and Castroneves had to settle for an 18th place finish. He retained the point lead, but by only eight points leading into Sunday’s Race No. 2 on the temporary circuit of Reliant Park Houston.

“At least the good news….I am starting with the good news,” said Castroneves post-race. “We are still leading and I didn’t know that. Second, we did have a much better car in the start of the race than in qualifying, and we are still leading. I don’t know who makes those decisions, but I tell you what, it’s not what we expected. The team did a great job.”

The weekend concludes with the running of Race No. 2 on Sunday at 12:40 p.m., CST. The race will have live TV coverage on NBC Sports Network. Additional live coverage will be provided by IMS Radio Network on XM and Sirius Channels 211 as well as on www.indycar.com live timing and scoring.

CHEVROLET IN THE IZOD INDYCAR SERIES - FROM THE DRIVER’S SEAT: SIMONA DE SILVESTRO, NO. 78 NUCLEAR ENTERGY AREVA KV RACING TECHNOLOGY CHEVROLET, FINISHED 2ND: ON THE PHYSICAL DEMANDS OF THE DOUBLEHEADERS: “I think it’s going to be difficult to be honest, but it’s the same for everybody. We just need to have a good meal tonight and rehydrate. But it’s definitely tough because you don’t have that much time to relax. The straightaways are really bumpy so you really have to be on top of the car every time. I think to finish P2 , I think you want to do it again anytime.”

SEBASTIEN BOURDAIS, NO. 7 MCAFEE DRAGON RACING CHEVROLET, FINISHED 8TH: "Well we should be happy because we started 14th and finished 8th in the #7 McAfee Dragon Racing car. We had a pretty fast car, running the 3rd fastest lap of the race. We were making a lot of passes and were able to run our way to the front in all the way to 4th. Unfortunately on one of the yellows the pits were closed for no reason, just a car stuck on track. no danger or anything. It hurt positions 1 2 and 3, and Dixon had pitted, so that just killed our race. I know its a tough business but we just need more consistency. So it was a disappointing finish but we have a fast car. Tomorrow we will have another shot at it and see what we can get."

E.J. VISO, NO. 5 TEAM VENEZUELA PDVSA CITGO ANDRETTI AUTOSPORT HVM CHEVROLET, QUALIFIED 9TH: “Well definitely a very difficult race; very physical, very demanding for everyone in the crew. Strategy was crucial, and I think it’s one of the things we got right. Even if we hadn’t had the right strategy, we unfortunately got messed up by a yellow flag where they closed the pits just as we were on our way in (to pit). We needed to make up some spots after that spot, and we did – back up to ninth. I’m grateful for the team – I had a very competitive car even when the Hondas are fast this weekend… I think we still had a good chance of finishing in the top three or four.”

WILL POWER, NO. 12 VERIZON TEAM PENSKE CHEVROLET, FINISHED 12TH: “It was very disappointing with not being able to keep the lead in the second half of the race. The Verizon Team Penske Chevy ran well and we were in a decent position. Obviously that yellow flag was good for (Scott)Dixon in the points. It ruined our day and a few other people’s as well. We know we have a strong car here in Houston and we will give it a go in tomorrow's second race and hope for a better finish.”

MARCO ANDRETTI, NO. 25 RC COLA ANDRETTI AUTOSPORT CHEVROLET, FINISHED 13TH: "The race was there, but it takes too long to get there. I have to sneak up on it and lose too much time coming up on tires. I lose mystrength in the restarts because I don’t have predictability. The car doesn’t tell me what the limit is and it could potentially stick. It’s very unpredictable which makes for a long 90 laps, so hopefully we can find predictability tomorrow for the No. 25 RC Cola Chevrolet."

SEBASTIAN SAAVEDRA, NO. 6 TRUECAR DRAGON RACING CHEVROLET, FINISHED 14TH: "It was a pretty disappointing finish for the #6 TRUECar because we had a very competitive car. We had a great start battling our way to the front for awhile. Unfortunately an issue on a pit stop where we couldn't get the hose out of the way and I clipped it enough to get penalized. So we had to come in and do a drive through causing us to go down a lap. To lose a lap around a place like this or anywhere you just pretty much out of the game. Seeing where Rahal and Jakes finished we were stronger than them, looking for a Top-10. This was unfortunate but racing is racing so we will be back again tomorrow."

HELIO CASTRONEVES, NO. 3 SHELL V-POWER/PENNZOIL ULTRA TEAM PENSKE CHEVROLET, FINISHED 18TH: “Obviously that was a tough finish for the Shell-Pennzoil team. Early in the race, the car was bottoming out in a couple of places and then I just couldn’t shift. It was a helluva job by the Shell and Pennzoil guys to figure out the problem and get me back on track. It’s tough but it’s something that’s out of our control. I tried to earn as many points as I could and really just focus on making the car better so we can be ready for tomorrow. On the positive side, we still have the lead in the championship and I think we will be in good shape for Sunday. We need to have a good qualifying and bounce back with a strong race tomorrow.”

ORIOL SERVIA, NO. 4 NATIONAL GUARD PANTHER RACING CHEVROLET, FINISHED 19TH: “It was tough out there today, but that’s what we expected. Our car was so great and I really thought we were going to be able to give the National Guard guys a good race. Baltimore was awesome for us, and when we got here I had a great pace. I was just waiting for our last stop. I don’t know what happened – it looked like we lost fuel pressure – but we’ll have to see.”

RYAN HUNTER-REAY, NO 1 DHL ANDRETTI AUTOSPORT CHEVROLET, FINISHED 20TH: “The dash just said low pressure, so something in the gear shifting mechanism lost pressure; I think we might have melted a line back there somehow. I don’t know how many races this season we’re sitting here watching the end of the race instead of being in it. We had a good day going on and the guys worked hard, I was hanging on to a car I’m not really comfortable with at the moment. We’re going to make some changes for tomorrow, but I think we had a top five car. The track is brutal, the heat isn’t an issue, but the bumps are just brutal and playing havoc on our setup right now.”

ED CARPENTER, NO. 20 FUZZY’S VODKA/ED CARPENTER RACING CHEVROLET, FINISHED 23RD: "Vautier got right in front of me at the start. Then he made a last second move to miss Hinch. I tried too but clipped him. The ECR/Fuzzys guys did a super job to replace the whole right corner of the car. They have been flat out since early last week with Fontana test, the trailer fire and this incident. We thought we might get out to gain a few points but, of course, Kanaan and Vautier got back out just in front of us. It was one of those days. We have Sunday now to get better."

JAMES HINCHCLIFFE, NO. 27 GODADDY PINK ANDRETTI AUTOSPORT CHEVROLET, FINISHED 24TH: "We’re just really disappointed with our run today. You hate coming all this way and getting everyone working as hard as they have with the trouble that we have had with the track and everything, but we were about ready to put on a good race and the GoDaddy PINK car was good starting in the third row. These guys (Andretti Autosport) are always good in the pits and good on strategy and I was really confident. I was looking forward to my first standing start because we didn’t make the one in Toronto. It’s just tough, it’s a tricky thing to do, but I guess the good news is that we have the chance to do it all again tomorrow. I really wish we had been able to run though; I was for sure looking forward to it. Thanks to Andretti Autosport and the fans who are sitting out here in this ridiculous heat and sticking by us all weekend."