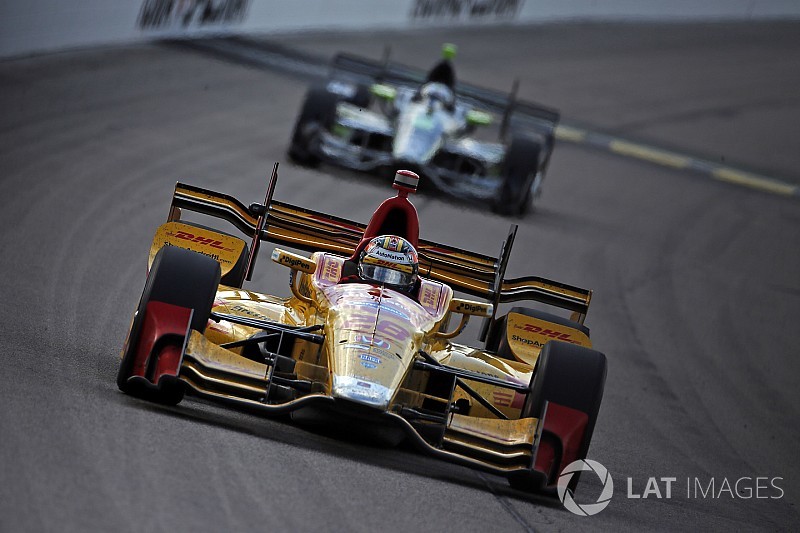 Mark Kent, GM’s director of motorsports competition, has admitted that should Chevrolet expand its IndyCar engine supply roster next year, Andretti Autosport would be on its list of potential partners.

Chevrolet currently supplies just eight of the 21 fulltime entries on the Verizon IndyCar Series grid, and with Team Penske likely to cut back to three cars next year, the Bowtie brand is perceived to need greater strength in numbers when IndyCar reverts to a common aerokit in 2018. In 2012, the first season of the current turbo era, Andretti Autosport won the drivers’ championship with Ryan Hunter-Reay and Chevrolet, but switched to Honda for the start of 2014.

The Michael Andretti-owned squad has gone on to win three of the last four Indianapolis 500s.

Kent told Motorsport.com: “I think our Chevrolet lineup is very strong. With that said, we are exploring opportunities and options, and Andretti Autosport was a great partner of ours when we got back into IndyCar in 2012 and we have a lot of respect for that team.

“If we were going to expand our lineup, they would definitely be on our list of teams we’d like to talk to. But again, we’re very pleased with the teams we have.”

Despite the manufacturer-supplied aerokits being frozen for 2017, Honda Performance Development has made a startling improvement in its statistics. After losing 14-2 in terms of race victories last year, it currently leads Chevrolet 6-5 this season.

With Chip Ganassi Racing having switched from Chevrolet to Honda for this year, and with the Chevy-powered KV Racing having folded in the offseason, Chevrolet has been reliant on Penske for its five wins. By contrast, Honda’s wins have come from Ganassi, Andretti Autosport, Schmidt Peterson Motorsports, Dale Coyne Racing and Rahal Letterman Lanigan Racing.

“Well when you have 50 percent more cars, the odds are in your favor!” said Kent. “But we are looking at quality versus quantity and the Chevrolet cars competing [four Penske, two Ed Carpenter Racing, two AJ Foyt Racing] are strong and we think that quality will help us win our sixth straight Manufacturers championship

“Ideally we’d like to have a balanced field and unfortunately as we saw this year, a four-car team switching will swing the pendulum quite a bit in a field of 21 full-time cars. But we’ve had the opportunity to help some new teams on the track this year, Harding Racing and Juncos Racing, both of whom used Chevrolets to compete at Indy, and both those teams are aspiring to join full-time next year. So hopefully as the field grows we’ll get more of a balance.”

Kent observed that the cachet of the Andretti name and the legacy of Michael Andretti’s team was only one part of GM directors’ planning for the future.

“So history is one thing, but we also have to look at the future.”

Asked if he might be prepared to offer a cut-price engine deal to help lure a team over from Honda to Chevrolet, Kent replied: “Racing is a sport but it’s also a business and we need to run it as a business.

“We’re responsible to our shareholders and we need to justify the investment, so we have to look at who’s available and what it would take to have them join the Chevrolet camp if we elect to grow that camp. We need to make the most educated decision to go forward.”

Michael Andretti declined to comment on the chances of his team switching back to Chevrolet engines.

“Too many variables” to compare engines yet

With IndyCar mandating a new common aerokit for 2018, next season is expected to highlight the differences in the engines of Honda and Chevrolet. Despite Honda suffering several reliability failures earlier this year, it’s now widely believed that the HPD unit is slightly superior to the Ilmor-built Chevy unit in terms of torque and fuel economy.

“The team we have working on the Chevrolet program between Ilmor and Pratt & Miller and our internal engineers – they don’t stop working. They’re working every day to figure out how to enhance performance. So we’re always working with the objective of not being at a deficit.

“There are so many variables that it’s hard, if not impossible, to say whether we’re at a disadvantage or advantage in any specific area.”

Although Chevrolet has won all five manufacturers’ championships in IndyCar since its return to the sport in 2012, Honda is 3-2 up on Indianapolis 500 wins. Given that, both Will Power and Josef Newgarden have stated that the Chevy engine is superior at the top end of the rev range, IndyCar’s adoption of a universal aerokit next year theoretically should increase Chevrolet’s chances of victory.

“Well that’s the millon-dollar question,” said Kent. “We studied data from the 2016 Indy 500 to learn for this year. We’ll study data from this year for next year.

“But like I said there’s currently too many variables to answer, ‘If you take the aerokit out of the equation how would the manufacturers compare?’ If the Chevrolet truly has an advantage at high rpm, then you’d think yes, we should have an advantage at Indy. But we’re not sure if that’s going to materialize or not.”

Kent said that despite the 2018 aerokit not being manufacturer supplied, Chevrolet and its external and internal resources would still be working closely with the teams to try and extract the most from the kit.

He stated: “If you look back to 2015 when we introduced the aerokit, I believe one of Chevrolet’s strengths and advantages was that when we hit the ground at the first test and the first race, we had mapped that entire aerokit and knew exactly what it was going to do in each configuration. That was really a testament to our teams and our engineers.

“So we’re hoping that even though it is a common kit, we’ll be able to provide our teams a leg up and a great starting point for the new kit. Once IndyCar has done its four sign-off tests, then we can gain the same learning that we did with the original DW12 and the Chevrolet aerokit.”