The announcement comes on the same day that Chip Ganassi Racing announced Tony Kanaan as a new driver for the next season.

HOUSTON—One of the most successful race teams in IndyCar Series history will be powered by Chevrolet starting in 2014.

“Chip’s teams have been a dominant force in open wheel racing for a long time, and we are looking forward to working together in IndyCar,” said Jim Campbell, Vice President of Performance Vehicles and Motorsports. “In addition, it will be great to be partnered with Chip and his organization in both open-wheel and stock-car racing.” 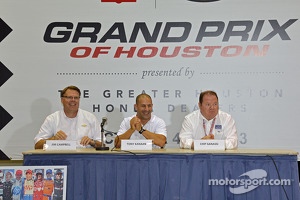 Chevrolet and Earnhardt Ganassi Racing with Felix Sabates have been partners in stock-car racing since 2009.

“This decision makes a lot of sense for us for a number of reasons,” said Chip Ganassi, Owner of Chip Ganassi Racing Teams. “We feel Chevrolet has done a great job in their return to the IndyCar Series and because of our existing relationship with them in NASCAR. There are a lot of synergies that we will be able to realize in working with the same manufacturer across the two series. We are thrilled.”

Chevrolet has nine poles and eight wins through the first 16 races of the 2013 IndyCar season.