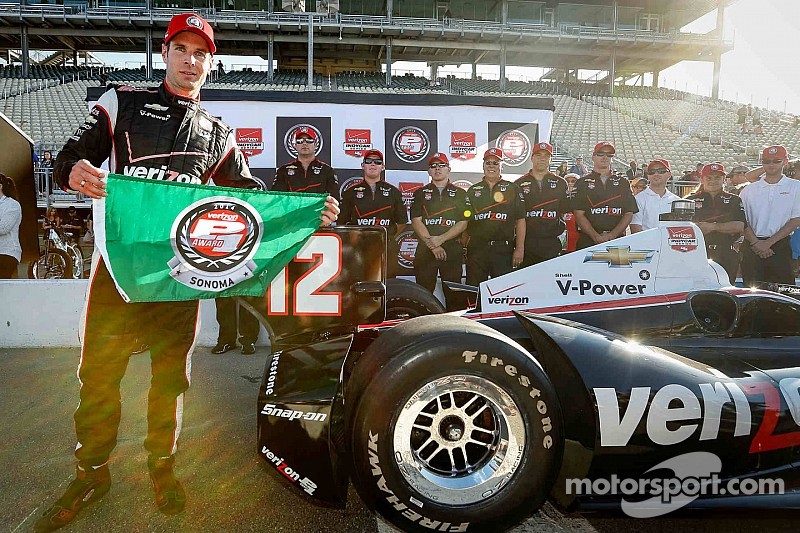 Power is looking strong as he goes in pursuit of his maiden IndyCar title.

It was the fourth pole at Sonoma Raceway for Power, who has won three of the past four years.

"It's a track-position race and starting on pole puts us in a good position," said Power, who claimed his fourth Verizon P1 Award of the season. "If it’s a normal sort of strategy, we’ve put ourselves in a great position to win the race. But you know how these races go. You’ve got to get everything right on race day and we’re going to try and do that."

With the bonus point for the pole award, Power takes a 40-point advantage over teammate Helio Castroneves into the 85-lap race on the 2.385-mile, 12-turn road course. Simon Pagenaud, who is third in the championship standings, qualified 15th in the No. 77 Schmidt Peterson Hamilton Motorsports car. Ryan Hunter-Reay, fourth in the standings, qualified 10th in the No. 28 DHL Andretti Autosport car. Six drivers are eligible for the title.

"We know we have a very good car and hopefully we'll have a good race," said Castroneves, who qualified sixth in the No. 3 Hitachi Team Penske entry. "You have to be aggressive in a way that puts you in position going to the last race to win the championship."

"Every point counts but there's a lot of points on the table and lots of racing left," Power added. "I just have to focus on the job at hand."

Josef Newgarden tied his career high of second on a road/street course (Mid-Ohio earlier this month) with a lap of 1:17.7318 in the No. 67 Hartman Oil/Sarah Fisher Hartman Racing entry. He's in a prime position to earn his first victory. There have been 10 different winners this season -- one off the record in the 2000 and '01 CART seasons.

“We’ve been there a couple times this year, I’ve been figuring it out," Newgarden said. "This was our worst track in 2012. I think we were two seconds off in 2012. Starting up front is a big deal. I think it’s a very difficult track to understand as a driver. With a team, you are trying to drive an engineering group for what you need around this place. The direction that you feed to them is so critical. I know that a couple times during the test here we made a wrong change and went the wrong way and I lost a second of pace on some of them. That’s how critical our set up is at least, so understanding that is really important.

"I think I’ve just gotten better at that with the team. It’s so cool to see our progress cause coming from 2012 nearly starting last. Now we’re in 2014 and we’re nearly starting first, it’s a really cool deal for me so I’m excited for (the race).”

Reigning series champion Scott Dixon qualified third in the No. 9 Target Chip Ganassi Racing car and will share row two with James Hinchcliffe, driving the No. 27 United Fiber & Data car for Andretti Autosport. Ryan Briscoe, who scored his first Verizon IndyCar Series pole at Sonoma Raceway and won in 2012, will be on row three with Castroneves.

Dixon is nearly mathmatically out of title fight