Well, Australians haven't had this great a chance at a hometown triumph since the Champ Car circus first visited in 1991. Will Power held onto his provisional pole and the Queensland native, driving the Team Australia no. 5 entry, will lead the ...

Well, Australians haven't had this great a chance at a hometown triumph since the Champ Car circus first visited in 1991. Will Power held onto his provisional pole and the Queensland native, driving the Team Australia no. 5 entry, will lead the 17-car field to the green for Sunday's Lexmark Indy 300. 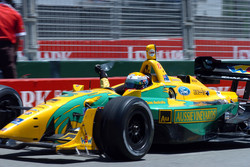 Will Power.
Photo by John Maricic.
"I feel awesome," said Power of his first pole position. "It's great for Team Australia, in Australia and to be an Australian driver. I couldn't have hoped for anything better."

Times were slower in today's second round of qualifying and only about half the field, including those who didn't post a time in Friday's first round, were able to improve their times. Power and championship leader Sebastien Bourdais share the front row.

It was a good thing Bourdais posted his second fastest time on Friday because he, like many in the field, made heavy contact with the barriers during the session. He lost control at turn two and totaled the left side of his McDonald's Lola. At any rate it is better to make these mistakes during qualifying than during the race.

"I probably just over shot the apex point by, I don't know, five centimeters or something like that," Bourdais rued his spin. "The plastic belt wrapped around the front tire and by the time I knew what was happening, the car was stopped without the left side."

Power consolidated his grip on pole with the fastest lap in the session before Katherine Legge spun and blocked the track at turn four. The ensuing red flag came simultaneously with the checkered flag so Power's spot was safe.

"I thought we should go out and try for a time on the black tyres and see where the car is at and see if it's actually possible to better the time from yesterday," Power recounted. "We didn't even get to do that run because the red flag came out for Sebastien. Then there was only 12 minutes to go so we had no choice but to go out on the red tyres and go for it."

With the extra point that Power added on Saturday, he extends his lead in the Roshfrans Rookie of the Year standings to ten points over Dan Clarke. Clarke starts 8th for tomorrow's race and will no doubt be looking to improve his position at the start.

Paul Tracy was one of those who failed to record a lap on Friday after crashing in one of the morning's practice sessions. PT was second quick today as one of only three drivers to break into the 1 minute, 31 second barrier. His eventual time of 1:31.959 places him third on the grid. He has not won yet this year and is one of four drivers looking to be the first to win a second time on the Surfer's streets.

Bruno Junqueira and Nelson Philippe completed the top five, Philippe improving from 6th on Friday and Junqueira unable to advance from 4th. Others of note were the other Team Australia entry, Alex Tagliani in 9th, and series debutantes Ryan Briscoe in 11th and Andreas Wirth shotgun on the field. RuSPORT will still only field one car this weekend, as Justin Wilson's entry was withdrawn following a shunt in Friday morning's practice and a subsequent wrist injury that will keep him out of action.