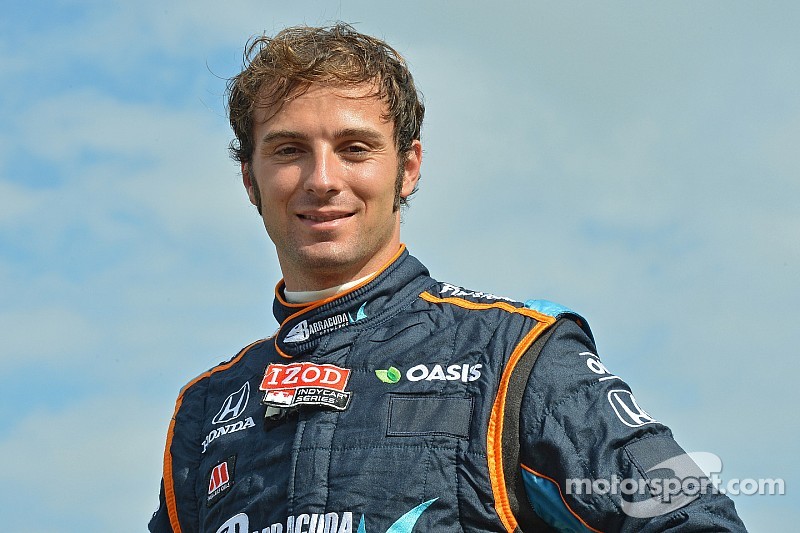 Luca Filippi will drive No. 20 at all road and street course events.

SPEEDWAY, Ind. - CFH Racing announced today the addition of Luca Filippi to the team's driver lineup for the 2015 Verizon IndyCar Series season. Filippi will pilot the Fuzzy's Award Winning Vodka Chevrolet at all road and street course events during the upcoming year. Ed Carpenter, the only owner/driver in the series, will continue to contest the No. 20 car at the oval events. CFH Racing's two-car effort is rounded out by Josef Newgarden, driver of the No. 67 car in all races.

"It's a great feeling. I can't wait to race and share the No. 20 with Ed this year," stated Filippi. "I have to thank Ed, Fuzzy's Vodka and CFH Racing for this fantastic opportunity and I look forward to the successes we will enjoy this season!"

After beginning his career in karting, Filippi worked his way up the European formula car ladder. His skill and speed caught the attention of the Formula One paddock and Filippi was hired to be a test driver in 2005, 2007 and 2008 by several different teams. The Italian has a variety of accolades in multiple series, including second places finishes in the GP2 Championship, the Auto GP Championship and the GP2 Asia Championship.

It's critical to have a fast driver in the seat next to you that pushes you every weekend and that you can learn from.

Carpenter, who co-owns CFH Racing alongside Sarah Fisher and Wink Hartman, welcomes the addition of Filippi. "I am very excited to announce that Luca will be joining the team and driving the No. 20 Fuzzy's Award Winning Vodka Chevrolet for the road and street course events in 2015," said Carpenter.

He continued, "We have seen the potential that Luca has shown over the past two seasons in his limited races and we feel that he will allow us to continue to compete for wins. I cannot wait to get the season started so we can work towards our goal of claiming the entrant points championship."

Filippi made his Verizon IndyCar Series debut in 2013, competing in four races with Bryan Herta Autosport. In 2014, he participated in four races with Rahal Letterman Lanigan Racing. The 29-year-old will drive for CFH Racing in 11 of the 17 events on the 2015 calendar. Filippi's schedule includes racing on the streets of Long Beach and Toronto, two of the three venues the team won at in 2014. Carpenter claimed the third victory on the oval of Texas Motor Speedway.

With CFH Racing entering two cars in 2015, Newgarden will have a teammate for the first time in his IndyCar career. "Having Luca join the CFH group is very exciting. He brings such a wealth of open wheel experience and talent," Newgarden said. "It's critical to have a fast driver in the seat next to you that pushes you every weekend and that you can learn from. He's going to be a tough guy to beat and that's exactly what we need to elevate our street and road course game."

Filippi recognizes the benefits as well. "Josef will be a very strong teammate to work with on the road and street courses. I'm looking forward to learning from him and watching Ed on the ovals as well," stated Filippi. "I'm really excited!"

Filippi will get behind the wheel early next week as he joins Newgarden and the CFH Racing team at Sebring International Raceway for their first test of 2015. Additional testing will take place throughout the months of February and March as the team prepares for the season-opening race in St. Petersburg, Fla. on March 29.

Led by co-owners Ed Carpenter, Sarah Fisher, and Wink Hartman, CFH Racing was formed in August 2014 by the integration of Ed Carpenter Racing and Sarah Fisher Hartman Racing. What is now CFH Racing has five victories and 16 top five finishes in the past four years and back-to-back pole positions for the Indianapolis 500 with Carpenter. CFH Racing will compete in the 2015 Verizon IndyCar Series with two Chevrolet V6 Twin Turbos, prepared in the team's Speedway, Ind. headquarters.

More on the cancellation of IndyCar's season-opener