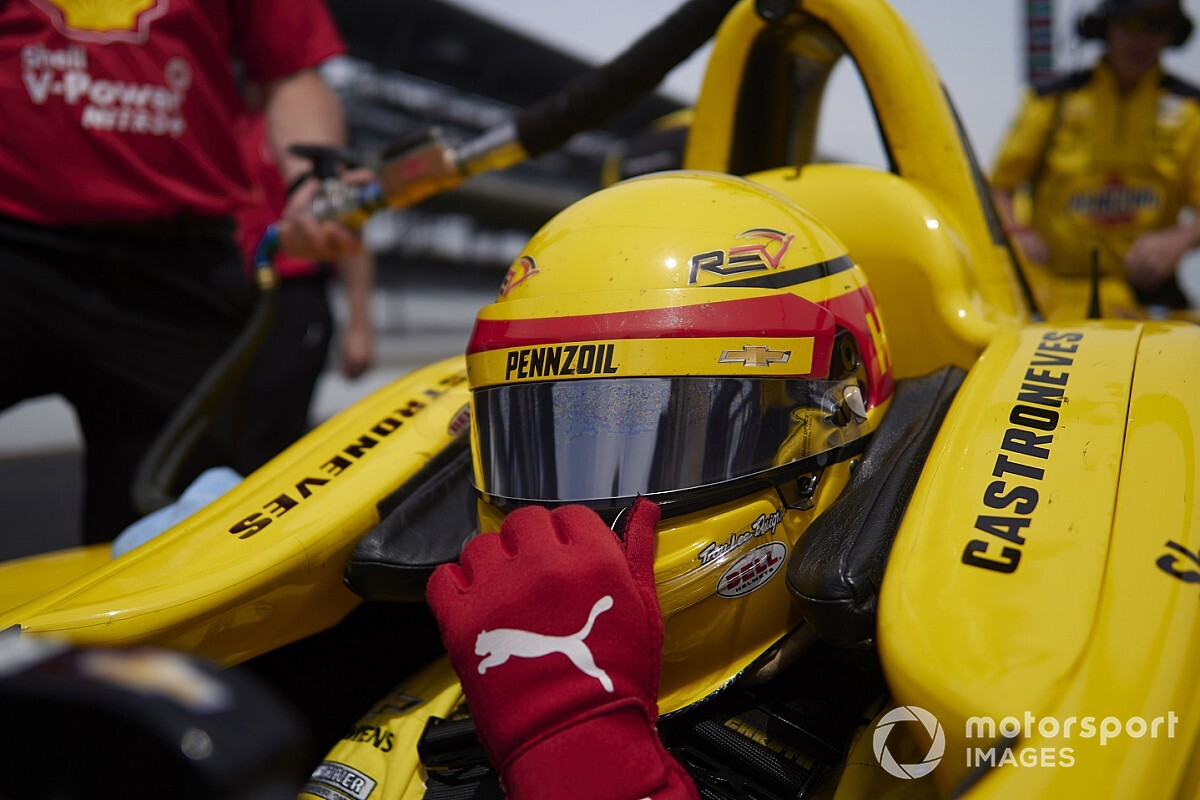 Helio Castroneves says that he is targeting a full-time ride in the NTT IndyCar Series next season but that he expects this month’s Indianapolis 500 will be his final drive for Team Penske in open-wheel racing.

With Acura and Team Penske having announced that their partnership will dissolve following November’s final round of the 2020 IMSA WeatherTech SportsCar Championship, and with Penske having no replacement sportscar program imminent for 2021, drivers Castroneves, Juan Pablo Montoya, Dane Cameron and Ricky Taylor have been informed they’re free to chase rides elsewhere.

On the back of an excellent victory with Taylor in yesterday’s IMSA race at Road America, Castroneves, who had made a reluctant switch from Team Penske’s IndyCar program to its revived sportscar squad at the end of 2017, said he is seeking the chance to re-establish himself in open-wheel cars.

“I’ll be honest, I’m looking for it, I wanna go back,” the three-time Indy 500 winner and four-time IndyCar Series runner-up told Motorsport.com on Monday. “I’m hustling, I’m open for business.

“I know I’ve been so connected with Penske for over 20 years, and I’m so grateful for all these years together, but they gave us the green flag to go look for drives in other places and that’s what I’m doing.”

In his last full IndyCar season, 2017, Castroneves scored a win and three pole positions and finished fourth in the championship, and at the time he quietly admitted he didn’t feel ready to quit open-wheel racing. However, he recognized that the opportunity to remain both part of Penske and be involved in a ‘works’ Acura/Honda Performance Development project was highly attractive – especially as Penske would also be able to offer him an extra IndyCar for the Indy 500 (and the preceding GP of Indianapolis).

Yet while Montoya and Cameron clinched the IMSA Prototype title for Acura Team Penske in 2019, Castroneves and Taylor have suffered more of the team’s ill fortune over the last two-and-a-half seasons, so that yesterday’s triumph was only their second together. Now Castroneves has five more sportscar races with Penske, according to the very latest yet still tentative 2020 IMSA schedule plus again a fourth Penske-Chevrolet in the Indianapolis 500, alongside Simon Pagenaud, Will Power and Josef Newgarden.

“A different team will be a new challenge,” said Castroneves, “but I think I can still bring a lot to someone else’s program. I’ve learned so much from Team Penske, and my work ethic is still there, and I think I’m driving at least as good as ever.

“So if the next team is an experienced team, I feel like I can still add to what they know, and if it’s a young team, I can add a lot to that too, because I’ve seen how things are done by the best.”

However, despite his enthusiasm to return to single-seaters, Castroneves has not ruled out switching IMSA teams

“I’m going to do everything I can to find options in IndyCar, but in fact, I also will look at IMSA too,” he admitted. “I mean, all bets are off at this point, right?! And three years in a sportscar program – I’ve learned so much there, too. Working with teammates, sharing a car with another driver, dealing with much slower traffic in GT classes, planning strategies, changing strategies during a race, compensating for BoP changes… My book of data, my knowledge, I’ve pulled together over the last few years includes so much. It helps me a lot.

“So I’m excited to see what options I have. I’m open for business and ready to go!”

Regarding the physical demands of IndyCar, 45-year-old Castroneves said he feels up for the task.

“Oh, no problem, man!” he replied. “It’s funny that after the race yesterday, Mike Hull [Chip Ganassi Racing’s managing director] texted me and said he was pleased to see me driving with enthusiasm and determination like a 20-year-old kid. I sent him back, ‘Hey Mike, age is just a number, buddy!’ and you know, I really mean that.

“When you love racing, if you want to be doing it so strongly and you have the fire and you know you’re still competitive, you take care of yourself and keep yourself in shape. It’s like Mario Andretti – I know he didn’t want to retire even when he got to 53! I mean, obviously you can still have the fire but not be as fast as before and then you should forget about it. But if you have the fire and you know you’re still able to produce, there’s no problem with motivation, and that’s how I feel. I can’t wait to get to Indy and show those young kids – and other team owners – I’m still around, still able to deliver!”

Castroneves this month aims to become only the fourth driver in Indy car history – along with A.J. Foyt, Al Unser and Rick Mears – to earn four Indianapolis 500 triumphs. The Brazilian veteran has also scored three runner-up finishes at the Brickyard, two of them in the last six years and both of those tantalizingly close to the winner.

“I think at first I will be leaning heavily on advice from Josef, Will and Simon for setups,” he admitted, “and they’ll be extremely helpful because obviously they have Indy wins and oval wins in this car.

“The rest is like riding a bicycle. Just this morning I was at a seat fitting, because although the seat is still the same, obviously now we have the little aeroscreen and you have to make some adjustments for the visual aspect – so that’s what I’m doing right now here in Charlotte. A bit of sim time and re-adapting to sharing information with JD [Jonathan Diuguid] who will be my engineer like he was in IndyCar before, but who ironically runs the other car, Juan and Dane’s, in IMSA.

Castroneves, who scored all 30 of his IndyCar triumphs and all but one of his 50 pole positions with Penske, has not been told specifically that the 104th running of the Indy 500 will be his last open-wheel race with Roger Penske’s legendary squad, but he says, “I don’t think I’ll be back again with this team, no.

“Our partnership has been great, we won a lot of races together, and obviously I thank RP and Tim [Cindric, team president] for all these years, for all this success and opportunity. And friendship, too, because we have a relationship not only inside the team but also outside, with car dealerships. I can’t thank them enough and so this is… not easy.

“We will still have car dealerships together, so we will still be in contact. Me and Roger, we sometimes see each other and don’t even mention racing, we talk about dealerships – and I learn as much as I can from him and Geoff Penske [Roger’s nephew].

“But there is no continuation of Penske’s sportscar program, so I have to move on, and I’m going to try and go back to IndyCar because it’s a type of racing I love a lot. If I get another Indy win with Roger in two weeks… well, I’d like to make it difficult for him not to run me again next year! That would be a good problem for all of us to have, right?! But let’s try and get there first.

“Seriously, I’m going to try and end our partnership in racing on a high note, both Indy and the Acura sportscar program, and then it’s time to move on.”

Yesterday’s triumph in torrential conditions in the final stint at Road America was “a good start to the month, for sure,” said Castroneves. He explained: “Remember last year at Sebring we had a disastrous situation in the wet? Daytona again didn’t look good. But in both those experiences, us drivers learned very much with the Acura guys, and that gave me huge confidence in knowing what the car needed in those track conditions like we had yesterday.

“So I actually felt good. Ricky did a really great job in qualifying and leading the race in the dry stints, keeping away from our rivals but not pushing the tires too hard. Very fast and smart. So when he brought the car in and handed over, I was like, ‘I can’t let my teammate down’, and I wanted that win so bad, man! I just had to make it happen. And we did. Very, very satisfying.”

In light of his relationships with Chevrolet in IndyCar and Acura/Honda in IMSA, Castroneves says he hopes a few more doors will open, especially considering those two manufacturers are the only engine suppliers in the NTT IndyCar Series for now.

“Both Jim Campbell [GM’s head of performance vehicles and motorsports] and Ted Klaus [president of HPD] are incredible and I think they understand the fact that I’ve had to drive for both companies, and I think I’ve represented them inside and outside the cockpit. I always treat people the same way as I like to be treated – with respect and honesty… and being fun to work with.

“So hopefully they will know that I can continue working with either of them in IndyCar and sportscars and they appreciate I still have a lot to offer their teams.”