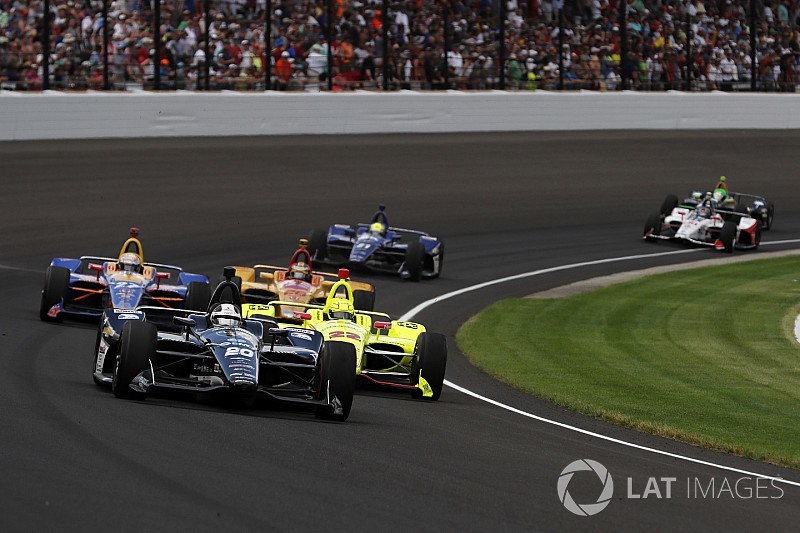 Ed Carpenter says the racing in this year’s Indianapolis 500 was “totally different” to previous years because of IndyCar’s current car and that he believes the kit may need tweaks to improve the racing.

The majority of the race was run single-file with drivers holding gaps of around one second to their nearest rivals. Concerns over passing had been raised throughout the Month of May, but IndyCar did not alter the downforce levels ahead of the Indy 500.

Carpenter, who finished second, adds that IndyCar may need to tweak the superspeedway aerokit to help racing, but at the same time, he admitted he liked the driving challenge. His rival for the win, Will Power, believed there had been “maybe only one lap” from the 200 that he was able to go flat out all the way around.

“It was a totally different type of race,” said Carpenter. “I'll have to watch it from the outside to see from that perspective.

“[But] I like the way [the 2018 car] drives. It's definitely challenging to the driver.  The old car, if you had a really good car, you couldn't really get rewarded by getting away or getting separation.

“I think [now] that if you have a good enough car, you're rewarded by being able to get away a little bit [but] I do think we need to maybe make little improvements just because it's so hard in dirty air to do much.”

“All-in-all, this new kit has performed so well all year. Like every iteration of cars, the longer we have them, the better they'll get.”

Three-time Indy polesitter Carpenter, who scored his career best finish at IMS by finishing second, pointed out that predictions that track position would be key had proved true.

“Track position was everything we thought it was going to be coming into the day," he said. "You heard the drivers talk all week.

“You could work your way through some lapped traffic. It was really hard to pass anybody if they had clean air in front of them. If you got stacked up in a group of cars all in traffic, I felt like my car was good enough I could kind of pick my way through some of them.”

For third-placed Scott Dixon’s comments on the topic, click here.

Roger Penske: “Will Power won because he was the best”

“They knew we were here,” says Foyt after Kanaan stars at Indy