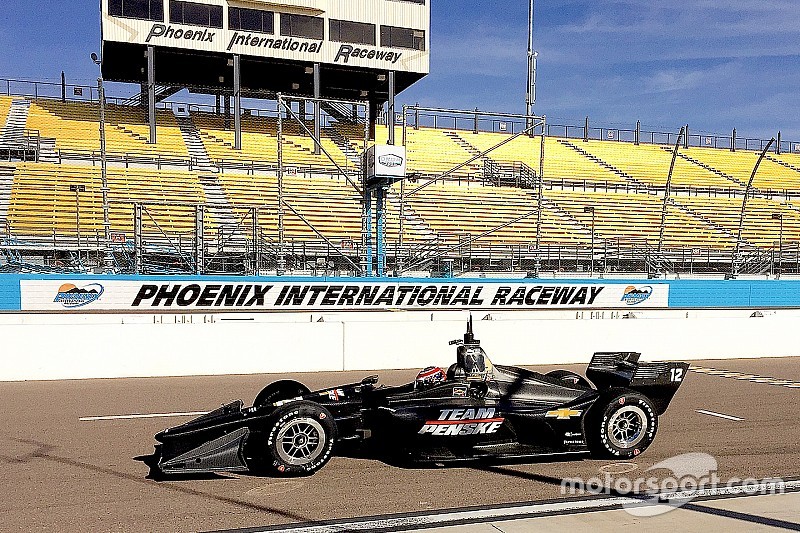 Following Chevrolet Manufacturer testing at Phoenix International Raceway, IndyCar veterans Ed Carpenter and Will Power believe the lower downforce setting of the 2018 car will improve the race there next spring.

Power (Team Penske) and Carpenter (Ed Carpenter Racing) completed a day of testing at the 1.022-mile oval as part of Chevrolet’s Manufacturer testing allocation. The pair were running the lower-downforce short-oval setup, as originally tested on the 2018 car this summer by Oriol Servia (Honda) and Juan Pablo Montoya (Chevrolet).

Carpenter told Motorsport.com: “The car’s definitely different, you can immediately feel how much less downforce it has. It’s forcing a lot more lifting in the turns and a lot lower corner speed, and then it definitely accelerates faster, given as much drag reduction as this kit has.

“It requires a different style from us as drivers – the line we’re taking is pretty similar, but we’re working the pedals a lot more, and going down a gear.

“Overall the day was very constructive, and I think the information we were able to give Firestone was valuable, regarding what tires they’ll need to bring next year. The tires can be a big variable because there’s so much less load, and I think the options they brought were good.”

Carpenter and Power spent several laps running in tandem, and on the subject of whether the right settings have been found to improve IndyCar’s races here, both sounded optimistic.

“There was a lot to learn about making the car happy in this configuration, and early in the day, I wasn’t super-confident that we had cars that would make the racing better,” said Carpenter. “But as we worked on the car and ran through some of the options, I got to the point where I felt confident – even on a pretty hot day – to where I could run closer in traffic than what I could last year.

“I think there’s promise, although there’s a lot to learn. It is a different beast, and I think we gathered a significant amount of data to where we can hopefully make the right decisions and put on a better show here than we've seen here the last couple of years.”

Power observed: “As the track cooled at the end of the day, a lot more grip came – it actually started to feel like the old car. But I think there’s going to be a fair bit of tire degradation.

“And the other thing is, when me and Ed were running together, once my car got loose, Ed could pull up and pass me. There’s no downforce to hide behind when your tires start to go off, and it shows that the driver behind can deal with the turbulence now. So that should be a sign that the racing’s going to be better.

“I think downforce is at a decent level if we keep this tire deg.”

Lap times, said Power, were in the low 20sec range which equates to approximately 182-183mph lap average. “And that was in the heat of the day, he added. As it cools, it’s going to get faster for qualifying and the race, well into the 19s, but you’re going to have to lift off the throttle and shift down.

“So I think Bill [Pappas, VP of competition at IndyCar] and Tino [Belli, director of aerodynamic development] had the downforce at the right level at the start of the day. I think you’ll see similar race lap speeds here next year, but with more tire deg, and with the speed obviously coming in a different way – less in turns, more on the straights, and more chance for mistakes.

Spencer Pigot, who will step up from being Carpenter’s road/street course driver in the #20 ECR car to fulltimer in the #21, was able to get in ECR's car for the last half-hour of the day, and his team boss was impressed, given the circumstances.

“Spencer did a good job, but I wish we could have gotten him a little more time in the car,” said Carpenter. “We thought we’d get through some of the program a little quicker than we did.

“But I thought he did a good job for his first time on a short-oval in one of these cars. It’s interesting, because in a situation where we’re running this new package on an oval for the first time, there’s always a little bit more uncertainty. When we tested him at Texas earlier this year, we knew we had good cars there, so we knew what we were giving him.

“So I think he did a good job today, and he was making quick progress. Like I say, we ran short of time and I think there were a couple of quick-fix things that could have helped him, but we’ve got faith in him. That’s why he’s in this position for 2018.”

Hinchcliffe expects 2018 IndyCar to be trickiest on street courses