Team owner/driver Ed Carpenter says he believes Aston Martin’s current Formula 1 tester Nico Hulkenberg could be interested in IndyCar but they haven’t yet gone into specifics about when that may happen.

The 33-year-old German had an amazingly strong junior open-wheel record but never found himself in the right team at the right time in F1, making 179 starts but without landing a podium finish.

Since his last full F1 season with Renault in 2019, Hulkenberg has been reserve driver for Racing Point (now named Aston Martin), and in that capacity made three starts last year. In the first two, both at Silverstone, he subbed for Sergio Perez who was suffering from COVID-19, and in the second of these he qualified third fastest. In his third outing, he took over from Lance Stroll but not until just before qualifying, but despite starting last, Hulkenberg finished eighth on race day.

As long ago as two years ago, when he knew he was being squeezed out of Renault’s F1 team, Hulkenberg visited Chip Ganassi Racing and since then he has retained an interest in U.S. open-wheel racing. Should he not wish to race ovals, Ed Carpenter Racing offers the best outlet available since team owner Carpenter races the left-turn-only courses in the #20 ECR-Chevrolet, but currently steps aside for Conor Daly at all the road and street courses.

“I’ve talked to Nico several times over the past year-and-a-half,” Carpenter told Motorsport.com. “I think he definitely has an interest in coming over and at least experiencing an IndyCar in a test. But getting that nailed down is not something that just happens out of desire.

“I’m sure he and others are even more interested having seen what Romain [Grosjean] has done and how much fun he’s having here. That’s got to open people’s eyes and have them asking themselves what all their options really are.”

Asked whether one of ECR’s primary backers, Sonax – the German car care company whose U.S. arm is owned by Carpenter’s stepfather Tony George – would be particularly interested in a German driver at his team, Carpenter said: “Our program is with Sonax U.S., not the main program in Germany, but potentially it could be interesting to them to have Nico here, yeah. For sure that was some of the thought behind the initial conversation.

“But I wouldn’t put a whole lot of substance to it. The amount of people we talk to over the course of a year remaining in contact and having an understanding of who’s available out there is just all part of the process that we or any team goes through.”

In light of Grosjean’s upcoming oval debut, Carpenter said he’s not yet sure whether another ex-Formula 1 driver such as Hulkenberg would be interested in trying out ovals.

“We haven’t gone into that type of detail,” said Carpenter. “We were just getting to know one another and seeing if there’s any interest in our branch of the sport.

“My perception was that I don’t think he knows enough to be comfortable with ovals just yet. And anyway, I don’t think he’s at a point where he’d be prepared to say he wants to come over and race here. I think he’s curious about IndyCar to the extent where he’d want to test one because right now he probably has more questions than answers.”

As has been the case for several years, Carpenter runs one full-time driver in the #21 (currently Rinus VeeKay) whereas he shares the #20 with another driver (currently Daly). He said that eventually he is hoping for an opportunity to run two drivers full-time, with his own oval-only program being a part-time third car.

“That’s something that is the logical next step in the growth of our team,” he said, “and it’s something we’ve been interested in doing for a while. It’s just a matter of getting the right partnership involved, whether it’s just with the U.S. Air Force or adding more to the program to make that effort full-time. So it’s a goal we’re continuing to work towards, but of course we’re going to make sure that if we do it, we do it properly, which requires proper backing.

“Personally, my plan is to continue in the same role I have been. There’s not that many ovals right now anyway. The rest of our plans largely revolve around negotiations and talks with the Air Force, which is a little unique because of the timing of how that works. It’s different from most other programs because it’s based on the nature of the partnership and budgets and government oversight. So it always takes a little longer than other programs to get buttoned up.

“But I feel things are in a good spot there with how the program is evaluated and what we’re doing with them. I’m optimistic… but at the same time, it’s an annual situation and we don’t receive approval until after a lot of other things get done.” 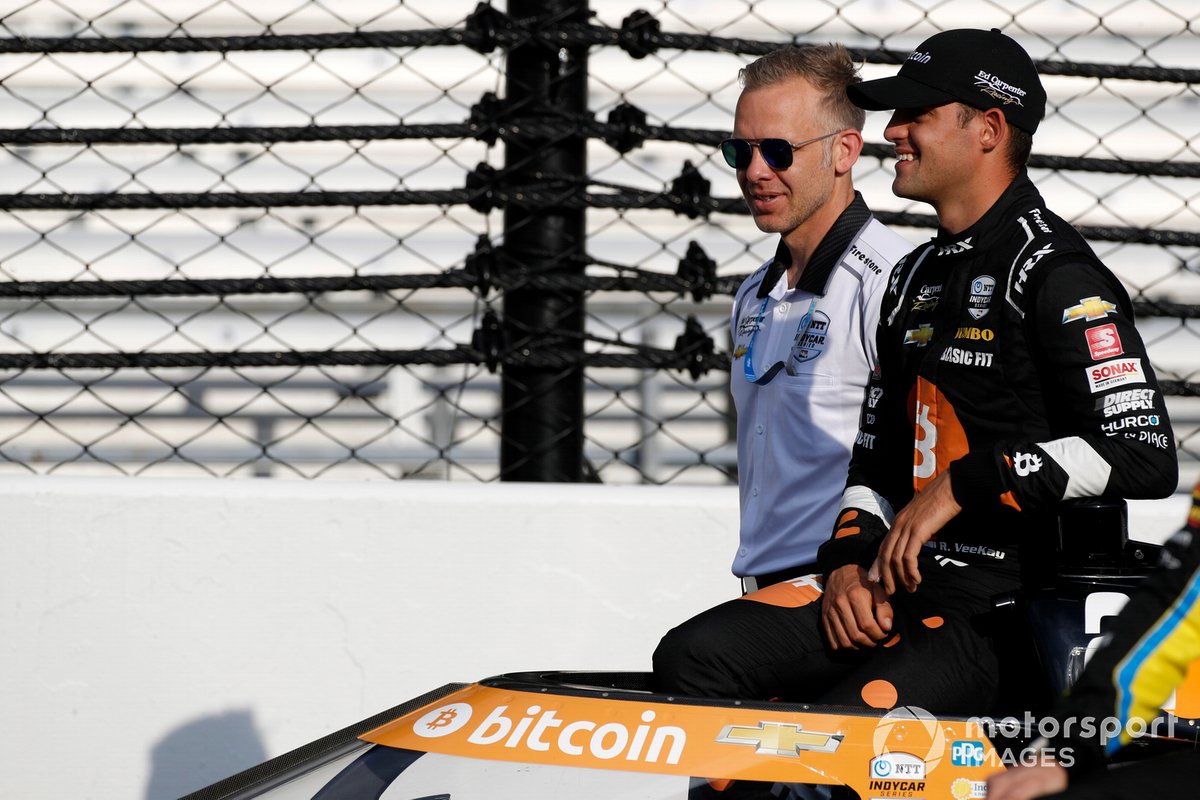 Carpenter said he was similarly upbeat about retaining VeeKay, who he brought onboard as a rookie last year, and who this year’s Grand Prix of Indianapolis on the IMS road course. He and the Dutch sensation, who’s perceived to be part of IndyCar’s ace youth movement along with Alex Palou, Colton Herta and Pato O’Ward, have a performance clause in their contract.

“I feel like we’re in good shape there,” Carpenter told Motorsport.com. “[The clause] is there to make sure we’re holding up our end of the deal but so far as I can tell, everyone seems happy.”

Carpenter says VeeKay’s Indy roadcourse win had contributed ECR’s attractiveness to other strong drivers, as the team has apparently returned to the level seen in the days of Josef Newgarden and, before that, Mike Conway.

“I think we’re in a better position than we have been in a long time,” he agreed. “Our big goal was to be more consistent this year, so we can be competing for top fives or podiums at any type of track we go to, and I think that’s been the case: our cars have been pretty good everywhere that we’ve gone.

“Obviously, it was disappointing that Rinus had to miss a race [after a cycling accident broke his collarbone before the Road America round] but winning on the Indy road course – Conor was up there too, if that first-lap collision hadn’t derailed him – and Rinus getting another podium at Detroit, having a strong car there… Yeah they’re certainly good signs.

“It was a bummer for everybody that Rinus couldn’t be there for Road America because I think the cars were pretty good there too.

“I’m happy with the work the team is doing, happy with the job that the drivers are doing. Any time you’re competing toward the front, then it puts us in the best-case scenario to retain the guys we have and be attractive to other drivers who are looking.”

The driver who served as VeeKay’s late substitute at Road America was the man who beat him to the Indy Lights crown in 2019, Oliver Askew, and Carpenter said the young American had given a good account of himself.

“Yes, he impressed us at Road America and made a really good impression on everyone he worked with on the team,” said Carpenter. “It was a really tough situation to come into a new team with very little time to prepare for it.

“I think the practice times showed that in qualifying he could have done a little better – he made a little mistake, as Conor did – but Oliver raced really well, did everything we asked him to do, and was really good to work with.

“Any time you have a good experience with someone in a race weekend, it’s going to keep him on your radar if there’s an opportunity down the road to work together.”

While 2012 champion and 2014 Indy 500 winner Ryan Hunter-Reay would seem a logical choice for ECR, Carpenter suggested such a partnership isn’t currently looking likely.

"Ryan and I are good friends and have known each other a long time – we were teammates at Vision Racing back in 2009 – and we spend time together when he’s here in town. Our families are pretty similar.

“For sure he’s someone I’m interested in if there’s ever an opportunity. It definitely seems like he’ll be looking for a new home. But with what we’re working on, I don’t know if there’s a place for Ryan here right now, barring the opportunity of adding another program onto what we have.

“I think he’s still very hungry and if he gets an opportunity next year you’ll see a highly motivated guy who wants to compete for the championship and show the Andretti Autosport guys they made a mistake letting him go.”