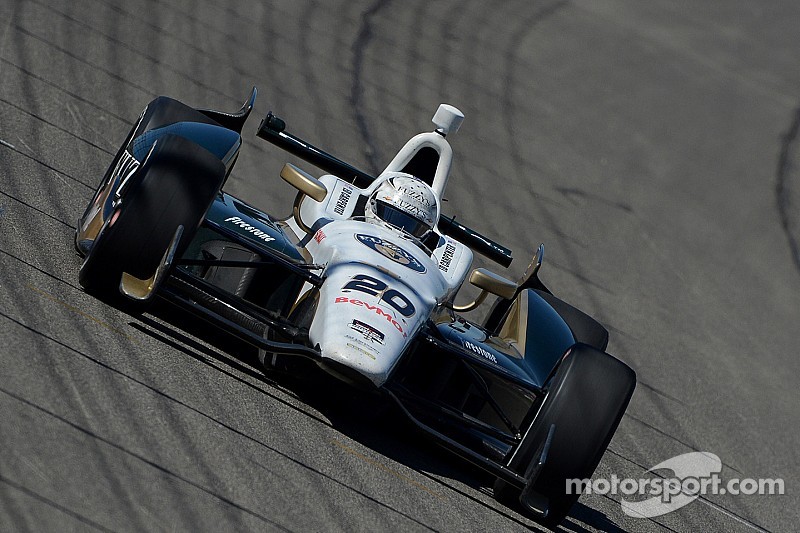 It wasn’t much of a surprise when CFH Racing, comprised of Ed Carpenter, Sarah Fisher and Wink Hartman, announced at their Speedway, IN shops they’ll be racing in 2015 with Chevrolet power and aero kits.

After all, Sarah Fisher drove Chevrolet equipment in her sprint car and World of Outlaws days and as an IndyCar driver when she earned the first pole for a female driver in 2002 at Kentucky Speedway; Ed Carpenter’s three Verizon IndyCar Series wins (in 2011 at Kentucky in Fisher’s entry, at Fontana a year later and this year at Texas as the series sole owner/driver), together with his two Indianapolis 500 pole positions this year and last have all been with Chevrolet power.

Fisher's been running Honda-power since 2012

From 2012 through this season, Sarah Fisher Hartman Racing was a Honda-powered team. Driver Josef Newgarden earned a second place podium spot at Iowa Speedway this June and looked, through much of this season like he was on the verge of victory. Honda Performance Development’s desire was to keep this driver in its family but that just wasn’t meant to be when Fisher, Hartman and Carpenter decided to join forces for the 2015 season and beyond, making their merger announcement August 16, 2014.

The newly formed team expects to have two full-season entries. Newgarden renewed with the team at the close of the season in late August and Carpenter is the driver of the second car. Whether or not he’ll share driving duties, as he did to great success with double race-winner Mike Conway in 2014, remains to be seen. Carpenter would love to have Conway return but that depends on whether the Briton’s work with Toyota’s World Endurance Championship LMP1 team continues in 2015.

Adding Josef Newgarden to the driver roster and Sarah Fisher and Wink Hartman, along with Ed Carpenter to our key partners is exciting for Chevrolet

As they did in 2014, CFH expects to have two additional entries for the 99th Indianapolis 500 next May. JR Hildebrand was the second driver for Ed Carpenter’s Racing in 2014, finishing 10th while Alex Tagliani took 13th position working with SFH Racing, this duo besting both Carpenter (27th) and Newgarden (30th).

Chevrolet has dominated since their return

Since its return to Indycar racing in 2012, Chevrolet has won the Manufacturers title three years running; the BowTie Brigade won the Indianapolis 500 in 2013, while Honda earned wins in 2012 and 2014. Chevrolet has 33 race wins in these three seasons and debuts its body kit at the start of the 2015 campaign. As homologated by INDYCAR, the Chevrolet twin-turbo 2.2-liter V6 engine features aluminum block and heads, direct injection and races on Sunoco E85 fuel. In 2014, Chevy fielded 10 engines for the full 18-race calendar.

“We are pleased that the newly formed CFH Racing will compete with Chevrolet’s twin-turbo V6 beginning in 2015,” said Jim Campbell, Chevy’s vice president of performance vehicles and motorsports. “Adding Josef Newgarden to the driver roster and Sarah Fisher and Wink Hartman, along with Ed Carpenter to our key partners is exciting for Chevrolet.”

Mark Kent, General Motors’ director of racing noted, “We realize teams have choices to make when it comes to engines,” expressing his pleasure that CFH Racing chose Chevrolet engines and aero kits. “We’ve been a partner with Ed Carpenter Racing for the past three hers and their contributions have been tremendous, both on the track and off the track as we develop our engines and chassis. We’ve had the opportunity to look down pit lane at what Sarah and Wink have been doing over the last few years, and we are very excited now having them with the Chevrolet in their car and having Josef piloting that car.”

Carpenter acknowledged, “Team Chevy has delivered for ECR over the past three years and I know our new combination of CFH Racing and Chevrolet will continue to put us in a great position moving forward. I started by IndyCar career with the Bow Tie and the past three years returning to the Chevy camp has been a great working relationship - obviously, we’ve been able to get some results along the way with the wins and the Indy poles, and with the new development of CFH Racing and all the hard work that’s going on to bring our two teams into this new team, this is really exciting.”

Fisher added, “Being part of the Chevy family in the past, I am looking forward to rejoining their organization. The decision to partner CFH Racing with Chevrolet was the first of many that we will make together as a team.” After being reintroduced to Chevrolet as CFH Racing began to take shape, “I have just been extremely pleased and excited about their professionalism and their commitment to our sport.” At the same time, “I have been extremely grateful for the partner that Honda has been in my career and to SFHR. We are thankful for their ongoing support of the Verizon IndyCar Series,” she said.

Hartman noted, “CFH Racing continues to develop into a top tier team with a contract with Chevy. The team is excited to start a strong relationship with Chevy going into the 2015 Verizon IndyCar Series. It quickly became clear to me [with] the support and the people with Team Chevy that this is the opportunity for Josef to further his career because we truly do have one of the best young drivers in the series. I think that Chevy gives us just two more steps on the ladder, three to advance what we're trying to accomplish and that is, obviously, wins on the track.”