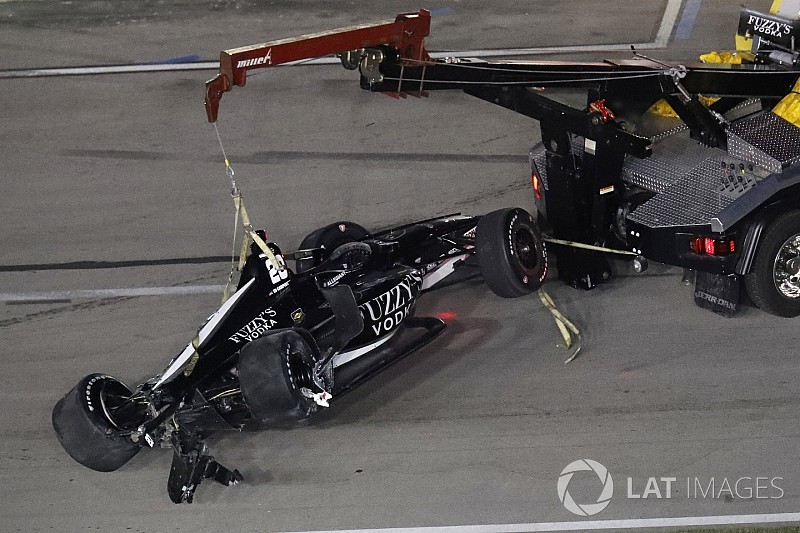 Ed Carpenter immediately accepted for the crash that eliminated himself and top-three contender, Robert Wickens at Texas Motor Speedway, while Wickens stated that drivers had gotten "really desperate" in their on-track behavior.

Wickens (Schmidt Peterson Motorsports), Andretti's Alexander Rossi and Chip Ganassi Racing's Scott Dixon made the most of Honda's better fuel mileage and nursed their tires sufficiently well to climb into the top three during the race.

But while Dixon went on to win and Rossi claim third, Wickens was eliminated in a clash with Carpenter on Lap 173 of 243 after he had pitted from the lead and began to cycle back to the front.

As Wickens dived for the inside line and the Ed Carpenter Racing boss closed the door and the two touched and slid up the track into the outside wall, forcing both into retirement.

“It was a mistake," said Carpenter. “I knew Robby was coming. I thought I could close the door, but it was a big mistake on my part.

"He was a lead-lap car. We were having a bad day, we just didn’t have it this weekend. We just could never get the balance right where it needed to be.

"I made it worse by making a mistake like that so, my apologies to him. I know it doesn’t mean much now.

"I feel bad for those guys. I feel bad for my guys. The night certainly didn’t need to end like this. It’s a mistake on me, and I’ll have to come back and get them in Iowa [Carpenter races the ovals for his ECR team].”

Wickens, for whom this only the second third oval race of his career, criticized the track ethics of backmarkers trying to stay on the lead lap and uncooperative rivals in general.

“I think [some cars were] being really desperate, trying to do whatever they can, I guess, to be racing," he said.  "[Zachary Claman] De Melo in front of me was being so dangerous and that's how Carpenter got by me. Ed made a mistake.

"I went to his inside. I don't know if his spotter didn't tell him I was there, but he just turned in and we had contact and went up into the wall.

“I mean, it sucks. We were so strong the whole night. Things were going so smoothly, we were getting the fuel mileage…

"We shouldn't have been in that situation in the first place, but it just sucks. We had such a good car.”

Dixon on Texas win: “It's not often you get a runaway in this series”