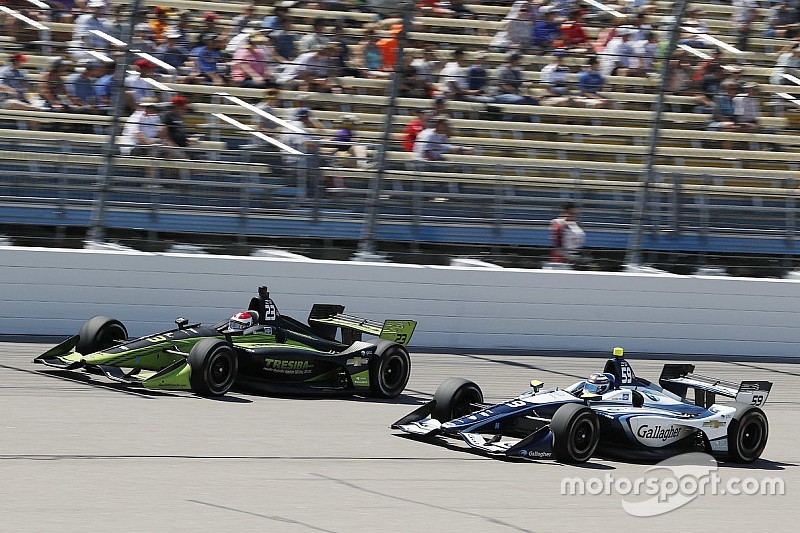 Carlin Racing is expecting to add an extra fulltime entry in the 2019 IndyCar Series, and will also be returning to the Indy Lights grid next year with two cars.

Trevor Carlin’s legendary junior formula team Carlin Racing made its first venture into U.S. open-wheel racing in 2015, when Ed Jones and Max Chilton finished third and fifth in the Indy Lights championship, while Jones went on to clinch the 2016 title. In 2017, Matheus Leist earned fourth in the title race for Carlin, but the Lights squad was rested this past season as Carlin moved up to IndyCar with ex-Ganassi drivers Charlie Kimball and Max Chilton in the cockpit.

The team’s progress and the uptick in IndyCar’s popularity, said Carlin, has resulted in several drivers showing interest in joining the team for 2019.

“IndyCar is going through a bit of a purple patch at the moment,” he told Motorsport.com, “and we’re having a lot of drivers speak to us about joining. It looks like there’ll be a lot of demand for a third car, so we’re gearing up accordingly.

“At this stage, I don’t know who might be driving it, but we’re getting ready to accommodate for that demand for a full-season car and I’d definitely hope by the end of October we’ll know who it is.

“Max and Charlie are staying on, or that’s the plan at least. We’re just in that contract stage of getting everything buttoned up. And so I’ve asked Chevrolet about an extra engine lease and they say there’s no reason why they couldn’t cover us for a third car.”

Carlin said he’d be interested in hiring his former Lights champion Jones, who is expected to be confirmed as being replaced by Felix Rosenqvist at Chip Ganassi Racing. But he also added that the ride in his third IndyCar might be split between two drivers, one for ovals, one for road/street courses.

“Yeah, that’s definitely an option,” he said. “I’ve seen how the American model works and although it means the drivers of that third entry aren’t fighting for championships, it still helps the team as a whole to have that extra data at each race. You learn faster.”

Proud but not satisfied by 2018 season

Carlin said he was happy with the progress made by his IndyCar team in its rookie season, even if inevitably it was a long way off the team’s ultimate potential. Kimball scored the team’s best finish with fifth in Toronto, and its best oval qualifying performance with 12th on the grid at Texas Motor Speedway. Chilton, meanwhile, got through to the Firestone Fast Six at Mid-Ohio and started 10th for the first Belle Isle, Detroit race.

“The big thing for us was getting through our rookie season with two cars and the same two drivers from start to finish. I don’t think that’s been done for a long time in Indy car racing [RuSPORT in 2004] and we’ve done a very respectable job, on which we need to consolidate and improve our performance.

“This season we got our cars quite late so we barely had time for testing before St. Pete [season-opener] and before we knew it we were at the Indy 500. This time around, we’ve got a five month off-season to get fully prepared, an absolute luxury. Although I’m generally pleased with what we’ve achieved, I’ll be pleased to have the opportunity to get closer to what I’d say was the standard of this team.

“But when you have a grid where 20 or 22 cars are covered by one second on the grid, IndyCar is the tightest field we’ve ever raced in – and on such a variety of tracks, too. So it just shows that teams and drivers have to get everything absolutely perfect. Miss out on one-tenth, and you slip three or four places on the grid. It’s pretty brutal!”

There was an infamously small Indy Lights field this past season – just seven fulltime entries – as no one emerged to replace the four-car Schmidt Peterson Motorsports squad that withdrew at the end of 2016 and Carlin which departed last off-season.

To encourage new entries, IndyCar and Andersen Promotions has upped the prize fund and theoretically lowered costs for 2019, and while Carlin says these moves weren’t the prime enticement to return, they did help.

“It doesn’t make a huge difference,” he said, “but they’re moves in the right direction and I think we can save a little bit of money.

“We came over to the States four years ago and in that period of time we have become an IndyCar team thanks to Indy Lights and Ed, Max, Matheus Leist and Zachary Claman De Melo have become IndyCar drivers thanks to our efforts in Indy Lights.

“So I think the Lights series deserves our support to help feed the next generation of drivers. You look at Pato [O’Ward] and Colton [Herta] and what they did in Lights, and Michael Andretti has prepared them and they’ve stepped up to IndyCar. I almost think it’s our duty to rejoin Indy Lights and start nurturing young drivers for the future.

“We need less than a week’s worth of work to get our Lights cars running with the small spec updates that have been brought in since we were last in the series.”

Asked if he would be looking to bring drivers over from Europe to form his new Lights lineup, Carlin replied: “Well, I think it’s always nice to bring good European drivers over, but there were one or two really good drivers in Pro Mazda this year. Whatever, I’m pretty sure there will be pretty high demand for the seats.”