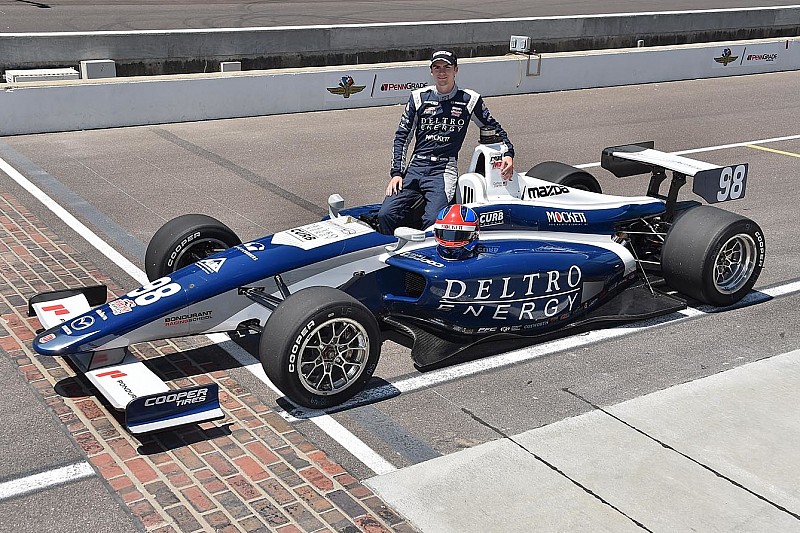 Team owner Bryan Herta believes his son Colton will be ready for IndyCar next season and says he’s already had “several interesting conversations” about his 2019 prospects.

The younger Herta currently lies second in the Indy Lights championship with four wins to his name – already twice his 2017 victory tally.

Both he and George Michael Steinbrenner IV, who co-owns the #98 Andretti Steinbrenner Racing entry, have said that they aim to move up to IndyCar in 2019.

Bryan Herta, who dominated the 1993 Indy Lights championship and won four races and nine poles in Indy cars, confirmed there have been discussions among IndyCar team owners regarding Colton.

“There have been several interesting conversations and ongoing discussions,” he told Motorsport.com, “and right now I’d say that hopefully Colton has a chance to move up to the ‘big cars’ next year.

“He hasn’t been part of those conversations too much, because we’ve wanted him to be focused on what he’s doing, trying to win the Indy Lights championship, and not worry too much about anything outside of that. But I’ve been pleased to see real interest there.”

Recent rumors have connected Herta and Steinbrenner to not only a fifth Andretti Autosport entry but a third Rahal Letterman Lanigan Racing entry.

Asked if it would be odd for Steinbrenner to take his investment from Michael Andretti’s team – in which Bryan Herta is a co-owner of Marco Andretti’s #98 entry – and put it in a rival team such as Bobby Rahal’s, Herta (a former RLLR driver) replied: “I don’t think so at all. My career has never been attached to Colton’s. His opportunities are his and have nothing to do with me.”

The senior Herta also moved to dispel the belief that Steibrenner’s personal wealth – he is the 20-year-old son of New York Yankees co-owner Hank Steinbrenner, and grandson of 37-year Yankees owner George Steinbrenner – means Colton has the opportunity to buy a ride with almost any IndyCar team.

“There’s a big misunderstanding over George Steinbrenner and his ambitions,” he explained. “Steinbrenner Racing is looking to move up and yes, George has played a big role in Colton’s development for the last two years and there’s a goal – maybe even an expectation – that wherever they end up, they could end up together.

“But they’re under the same constraints and obligations as every other team – they’re out there hustling, trying to raise money. I think there’s a misconception that there’s a blank check following them around, but actually they’re meeting with companies, building a marketing group and trying to create a business.

"They’re not going hobby racing. They’re trying to form a business model because that’s the only way to make these things successful and lasting.

“George is guiding it, he’s the passion behind it, but it’s got to make financial sense and he’s got to have partners just like everyone else.”

Should an opportunity not arise, Herta suggested a third year in Indy Lights would be more likely than a temporary switch to IMSA Prototypes.

“A third year in Lights… We wouldn’t summarily dismiss it. He’s learned a lot there. I think IMSA would be unlikely because Colton has a development deal with BMW, so if he did anything in sportscars it would be in some way attached to BMW, which would presumably be in GT cars.

“So I guess if there wasn’t an opportunity to move into IndyCar, he could stay in Lights… But I think he’s ready to move up.”

Thumb injury ‘on the mend’

Colton Herta is in a close fight with Andretti Autosport teammate Pato O’Ward for the Indy Lights championship, but last weekend at Toronto, the 18-year-old had three accidents, a fractured thumb sustained in the first one partly contributing to the other two, as the curbing momentarily snatched the wheel from his grasp.

Consequently, he was told by his father to sit out the second race, once he had completed two slow laps to guarantee being classified sixth in the paltry seven-car field.

“I think he would agree with me that I’m not managing him, as such,” said Bryan, “but I look out for him as a parent, I advise him as a parent. So yes, it was my call that he didn’t race at Toronto on the Sunday. He was sitting in the car waiting to take the green, still trying to convince the team and I that he could do it!

“The thing is, he’s 18, he’s got his whole career and life in front of him, and at some point as a parent you have to say, ‘This is not smart, this is not what you should be doing. You’ve had an injury, give yourself a little bit of time.’ If it was up to him he’d have raced.”

O’Ward earned a first and a second across the two races, so that Herta, who won four straight races earlier in the year, lost the lead in the championship. However, his father said the thumb fracture is on the mend.

“He maybe won’t be 100 percent at Mid-Ohio, but he should be able to compete and he’ll be at least 90 percent by Gateway,” he commented. “At least Mid-Ohio isn’t bumpy. That’s what was killing him at Toronto – the wheel kickback.

“So he should be helped by Mid-Ohio’s smooth surface, having 10 days between Toronto and first practice at Mid-Ohio to recover, and the fact that one of the things that 18-year-old kids do great is rebuild bones. He should be fine.”

Herta’s second year in Lights has seen him able to apply the knowledge gained in his rookie season, so that the emphasis isn’t blinding speed in qualifying but being the best on race day. Whereas last year he tended to be phenomenally fast in qualifying but his setup and/or driving technique would abuse his tires too quickly.

“Yeah, I think that’s right – he’s learned from experience,” said Bryan. “Last year he had a whole bunch of poles [7] and not so many wins [2], and one of our big conversation topics over the winter was focusing on what you need for the race, what you need to do to give yourself a good car on raceday.

"And by then he’d obviously had a year in Indy Lights so he had a much clearer idea of what the car should be doing over a 50-lap race.

“As long as you can qualify near the front, the key is having a good long-distance car. It was important for him to learn that lesson and he has done – he’s done very well with it. He’s still had a couple of poles, but he’s had four wins, too and a lot of that is down to that switch in approach.

“And being able to do that, to modify his approach and find a different way of operating to give himself the best chance to win the races, is why I think he’s ready to move up.”

Kimball Q&A on Carlin progress, that top-five finish, and prospects