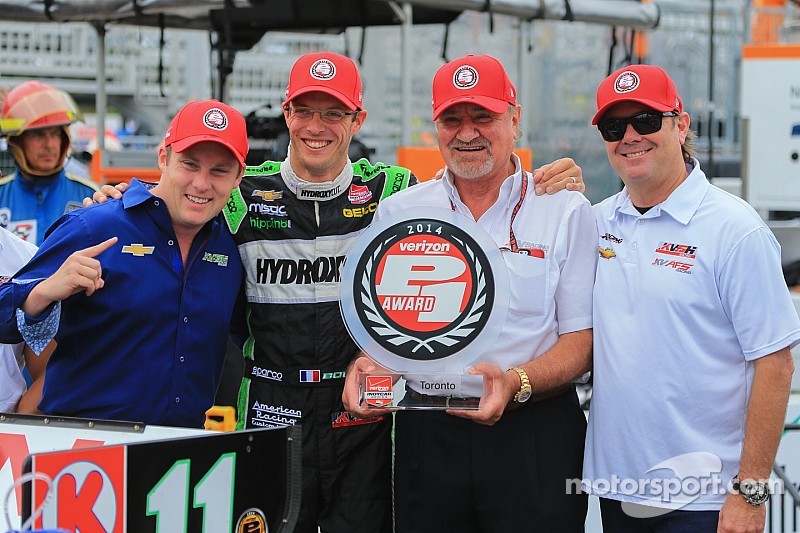 Sebastien Bourdais has claimed pole for this Race One at Toronto.

That streak, covering 54 starts for the four-time CART champion, ended July 19 as the driver of the No. 11 KVSH Racing car earned the Verizon P1 Award for Race 1 of the Honda Indy Toronto doubleheader.

Bourdais is the 10th different Verizon Pole Award winner in the 13 Verizon IndyCar Series races, and he tied Michael Andretti for eighth all time with his 32nd pole.

“The Hydroxycut machine was really strong in qualifying today,” he said.

“It’s a bit of casino race here. Anything can happen," said Bourdais, whose next win will be his 32nd and break a tie with Dario Franchitti and Paul Tracy on the career list. "But we keep on displaying pace and showing up at the front, so hopefully at some point it’s going to break and we’re going to make it.”

Five different teams were represented in the Firestone Fast Six, and it was the first pole start for KVSH Racing since Las Vegas in 2011. Bourdais’ lap time was quicker than the pole-winning times of Franchitti and Scott Dixon in last July’s doubleheader.

Power, driving the No. 12 Verizon Team Penske car, qualified on the front row for the fourth time this season.

"We have been knocking on the door the past few races. It is just what I have been saying all along. I think we are getting better," said Power, who won the St. Petersburg season opener and at Belle Isle. "Every weekend the team is definitely finding the stuff that we were missing to be extremely competitive everywhere. Today was one of those days. We are back in the Fast Six, so we will see what we can do from there."

"We qualified third and we’re kind of upset about it. That’s a good thing," said Castroneves, who takes a nine-point championship advantage over Power into the race. "It’s a great position to start the race."

Dixon, who swept the doubleheader in 2013, will start 12th in the No. 9 Target Chip Ganassi Racing car.

For Race 2 on July 20, all entries shall participate in one of two groups for 12 minutes each of track time (10 a.m. ET July 20). The Verizon P1 Award will be awarded to the best overall lap time.