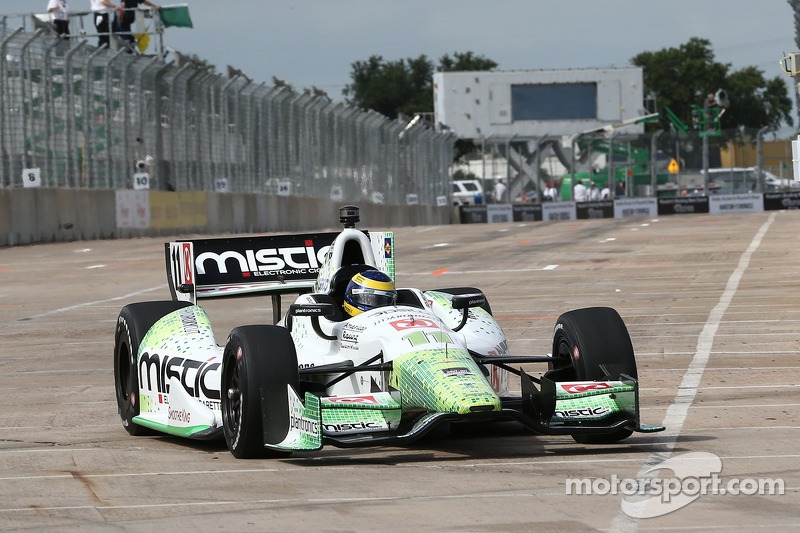 Second top-five finish of the weekend

KVSH Racing driver Sebastien Bourdais completed the Shell and Pennzoil Grand Prix of Houston with a spectacular fifth place showing in Race No. 2 giving him his second top-five finish of the weekend on the 1.69-mile, 10-turn NRG Park temporary street circuit in Houston, Texas.

Bourdais qualified the No. 11 MISTIC E-Cigs - KVSH Racing Chevrolet/Dallara/Firestone machine fifththis morning with a lap of 59.2863 seconds. Starting from the inside of row three he was one of just two drivers to open the race on the primary (black) Firestone tires, which consist of a harder more durable compound, but lack the grip of the softer and less durable alternate (red) tires. Never-the-less, Bourdais was able to essentially hold position throughout the first stint. Pitting on lap 30 the team switched to the alternate tires and following a fantastic stop by the Mistic E-Cigs - KVSH Racing crew, Bourdais found himself in fourth place.

Approximately a third of the way through the second stint the first yellow flag came out and on the restart Bourdais was on the move. He passed Will Power to move into third place and had a run on Helio Castroneves for second when Castroneves came across the track and both he and Bourdais made contact resulting in damage to Bourdais' front wing. After a series of conversations, Bourdais told the team he wanted to continue on, which he did now in second place. Towards the end of the stint Bourdais began to drop back and was in fifth place when he pitted for the second and last time on lap 60. Prior to this final stop a series of conversations took place and everyone agreed to soldier on with the wounded wing because replacing it would have cost too many positions. Bourdais rejoined the race in 11th place and the decision to leave the damaged wing proved correct, as a series of incidents and his incredible skill allowed the 35-year-old Frenchmen to move into fifth place on lap 89 of the 90-lap contest where he finished.

"It was an interesting day," Bourdais said. "We took a bit of a gamble starting on the black (primary) tires. We didn't think we would be the only ones, but as it turned out there were only two of us who did and it kind of worked out. We managed to hang on during the first stint and were really strong once we switched to the red (alternate) tires. We started to run down the leaders and then there was the first yellow. On the restart I was strong and the other guys were struggling. I passed Power (Will) and went for Helio (Castroneves). He was on the inside and I went to the outside, the right side. I put my nose next to him and I guess he never saw me coming. He changed lanes and we made pretty heavy contact. That busted my front wing pretty good. After that it was a tough fight. I had to be really creative to compensate for the balance of the car. I played with the brake balance and I was having trouble stopping the car and lost a lot of positions. Then there was another yellow and another yellow and another yellow. We hung in there and at the end of the race I was able to make a couple of moves and in the end we had another top-five finish. We just have to keep on working and hopefully we can win one for the Mistic and Hydroxycut guys."

Bourdais, the only driver to win four consecutive U. S. based open-wheel championships (2004-2007) earned 30 points today and combined with his 32 points yesterday for fourth place in Race No. 1 moved him up four places in the championship. He now sits eighth in the standings with 242points on the strength of four top-10 finishes this season including three top-five showings (season-high fourths here at Houston and at the inaugural Grand Prix of Indianapolis, todays fifth place finish a career-best seventh place performance in the Indy 500.