Meyer Shank Racing’s IMSA Prototype champion Tom Blomqvist says he would like to return to open-wheel racing eventually, after topping the IndyCar rookie evaluation test at Sebring on Wednesday.

Although fuel levels and even push-to-pass boost data was kept largely secret between the five teams that were testing at the Sebring short course, 28-year-old Blomqvist’s best effort was nonetheless an impressive 0.33sec clear of his nearest opposition, Formula 2 race winner Juri Vips in the Rahal Letterman Lanigan-Honda.

Afterward, Blomqvist – who finished the 2014 Formula 3 Euroseries sandwiched between Esteban Ocon and Max Verstappen – admitted that picking up his open-wheel career had strong appeal.

“If the opportunity arose, I’d love to give it a shot,” he said in answer to Motorsport.com’s question. “Obviously in the sportscar stuff we’ve been doing recently we’ve had a lot of success in a very short time, and I really do enjoy that kind of racing, but I think IndyCar’s another step up in terms of credibility. It’s a more well-known series.

"I think for a career, it’s another step up and I think as a racing driver you always want to try and keep working your way up to bigger and better things, and I think IndyCar is that, over here in America.

“I have such a good connection with the team and if I’m doing well, there are opportunities for me. Obviously it comes down to both parties but for me, feeling like I can be confident in doing the job.”

On the subject of what would be the next step should he want to switch to IndyCar, and whether he would test with the team next February, Blomqvist responded: “Realistically, I don’t think there’s much going on for me in IndyCar next year, for sure.

"It’s obviously a conversation I need to have with [team co-owners] Mike [Shank] and Jim [Meyer], and then it’s a question of, ‘Do I want this enough and do I believe I can do the job and do they believe I can do the job?’ It’s obviously a conversation that needs to be had, looking through data, and then maybe an opportunity further down the road and really see if this is something that both parties want to pursue.

“So yeah, we need that chat. But if the opportunity arose I’d grasp it with both hands and give it a shot.”

Blomqvist says that gaining experience with the new hybrid Acura LMDh car for IMSA’s GTP class in 2023 could make him more desirable to IndyCar teams, as U.S. open-wheel steps into its hybrid era in 2024.

“All that stuff helps,” said the Anglo-Swede, who will also race in the LMP2 class of the FIA World Endurance Championship next year with United Autosports. “I’m getting more and more experience as a racing driver, and working with different people, different manufacturers, new cars – the LMDh is a big step up in terms of technology.

"The IndyCar is a very basic bit of kit… very raw. So I think all that little stuff helps. You’re always feeling that database you have upstairs, you’re always learning, learning new tricks, working with different people, working with new people, how to get the most out of people, new cars, new packages. I think the bigger adaptability you can have as a driver, is only beneficial.”

Regarding the test itself, Blomqvist admitted: “We had some small issues in the morning so didn’t get too much running done – just a couple of runs to get used to the car, to get the feeling, because obviously it’s quite different to what I’m used to. Then in the afternoon, we managed to get a bit more running done. Had some downtime, had a bit of a spin – all part of the learning process.

“So a good day, enjoyed it, a bit tired now – but I held up reasonably OK. Definitely a lot more physicality to it.”

Blomqvist explained that the performance of an IndyCar compared with his title-winning Meyer Shank Racing Acura ARX-05, in terms of lateral or longitudinal g-forces, didn’t catch him by surprise. The hardest part, he said, had been getting used to the absence of power steering.

“To be honest, the speed of the car wasn’t a big shock to me,” he said, “it doesn’t feel a huge difference to the DPi in terms of performance. It feels a bit quicker, but it doesn’t feel like a big step up. It’s more the brutality of the steering loads. How much effort you have to put through the steering wheel…

“So it’s not really cornering speeds or g-forces or the neck. The DPi car is pretty quick in the corners, especially the high-speed stuff. It’s just the steering loads [in an IndyCar]: once you put those new tires on, it’s so stiff on the steering. The old arms got a bit of a workout for sure!

“[In terms of characteristics] The braking performance is probably the biggest difference to the sportscar: you can really brake late, put a lot of force through the pedal.” 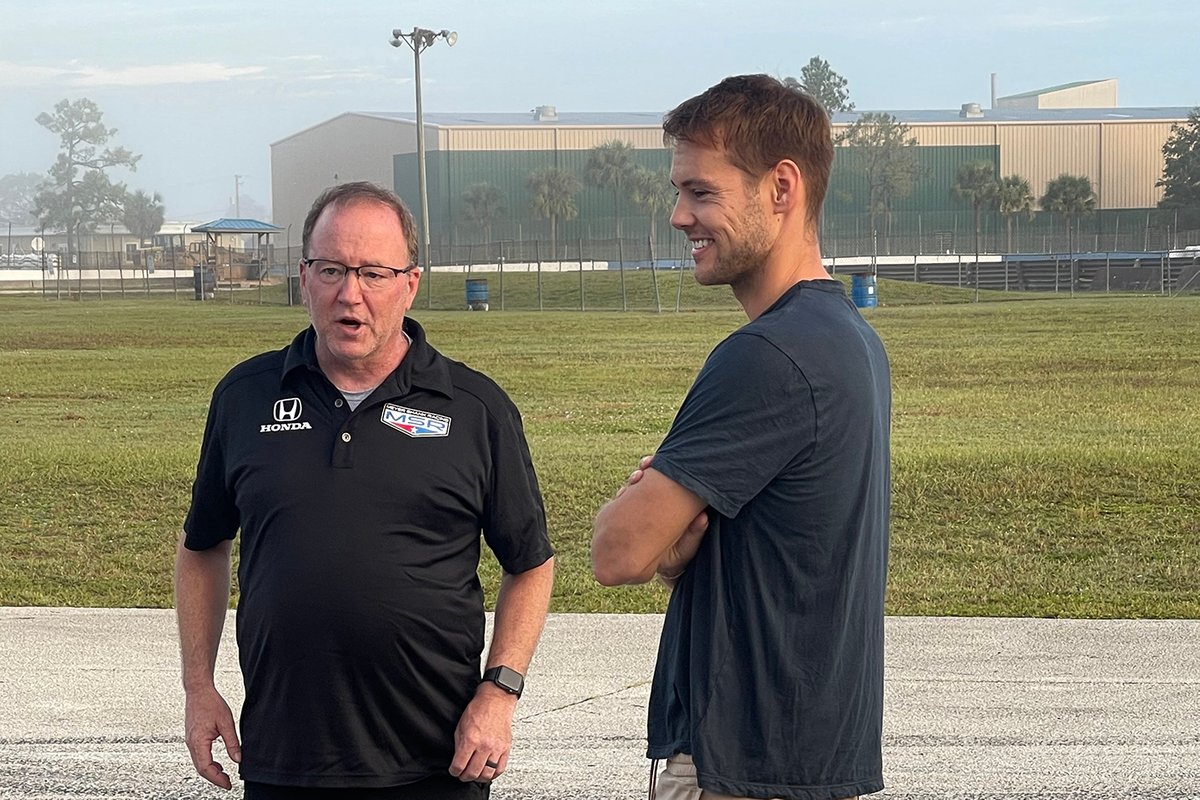