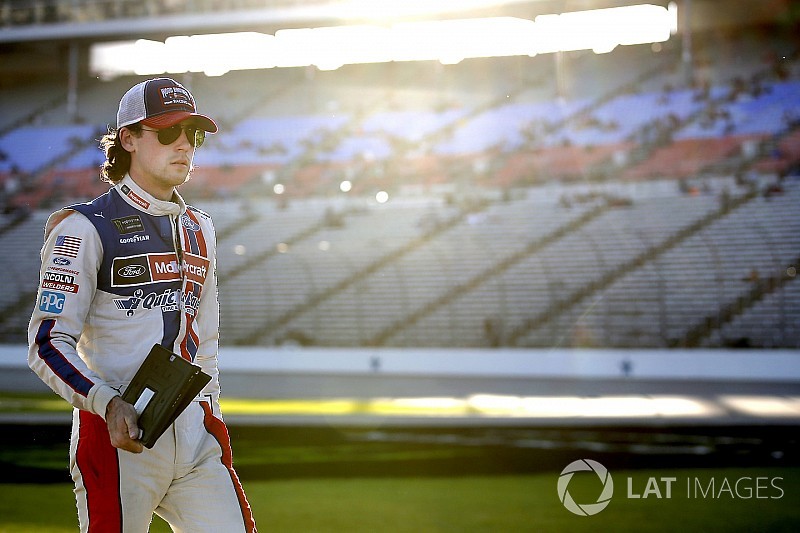 Ryan Blaney, who will move from the Wood Brothers Ford to run a third Penske Racing entry next year, has reiterated the fact that he is interested in attempting the Memorial Day Weekend classic at Indianapolis and Charlotte.

The last driver to attempt this was Kurt Busch who in 2014 started 12th and finished sixth on his IndyCar debut at IMS, earning himself Rookie of the Year honors. He then flew to Charlotte, but was eliminated just past half distance when his engine blew.

Blaney currently lies sixth in the Monster Energy NASCAR Cup Series standings, having scored his first win and first pole this season, only his second full year at the top level. Next year he will race the #12 Ford for Penske as the squad expands to three full-time Cup entries.

On a Facebook Live Q&A earlier this year, Blaney expressed his interest in one day competing in both the Indianapolis 500 and Coca-Cola 600 on one day. At Texas Motor Speedway this weekend, he again stated that emulating Busch’s effort remains an ambition.

“I would love to do it,” Blaney told reporters. “I have a lot of respect for the people that have done it. That is a tough day of racing – 1100 miles and the plane rides back and forth.

“When Kurt and Tony [Stewart] did it, I thought that was really neat. It is something I have always wanted to do and hopefully I can do it one day. Maybe down the road.”

“The Penske group is pretty good at the Indy 500 so hopefully I will get that chance. My interest level is really high and I would love to do it to say I was a part of it and able to race that event.”

Although team owner Roger Penske, whose team has 16 Indy 500 victories, hasn’t officially commented on the subject, he did tell Motorsport.com in 2016 that running incumbent NASCAR ace Brad Keselowski at Indy “could be interesting one day.” This followed Keselowski’s one-off test of Simon Pagenaud’s IndyCar at Road America.

De Ferran on Castroneves: “He’s an IndyCar great, no question”