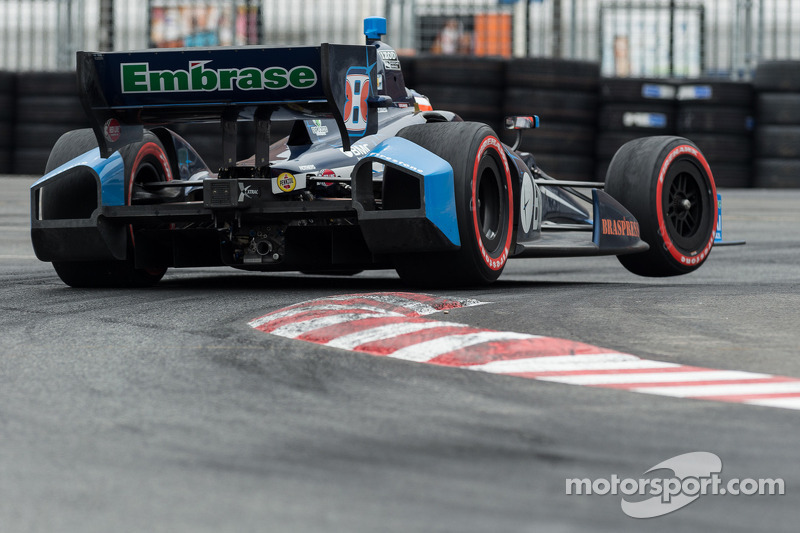 Baltimore, MD – KV Racing Technology driver Rubens Barrichello scored his second consecutive top-five finish today with a fifth place showing in the caution filled Grand Prix of Baltimore on the 2.04-mile, 13-turn temporary street circuit in downtown Baltimore, Maryland. Teammate E. J. Viso had almost as strong a performance placing ninth, while Tony Kanaan, the third of the KVRT trio, had an incident late in the race and placed 20th.

Barrichello, No. 8 BMC | EMBRASE – KV Racing Technology Chevrolet/Firestone machine, who was very fast in practice yesterday, but got caught out in qualifying by a red flag qualified 17th. However, he started the race 15th after penalties were accessed to two drivers for an unauthorized engine change.

Given his starting position on speed, the team committed to a minimum three stop strategy early in the contest pitting Barrichello on lap six to switch from the primary “black” to the alternate “red” tire. The move dropped Barrichello into 22nd place, but also gave him the running room he needed to use the speed he had shown in practice. 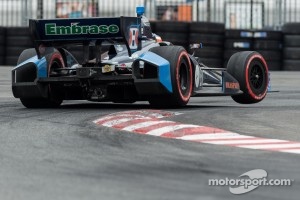 From that point on Barrichello drove a flawless race using his unquestioned driving skill to work his way through the field and pick up positions during the numerous restarts (nine caution flags). Barrichello also benefitted from outstanding pit work from his BMC | EMBRASE crew and two tactical decisions.

The first decision, in consultation with Barrichello, was to remain on the slick “dry” tires when a rain storm passed through early in the race. As other drivers peeled off to put on rain tires, Barrichello slotted into fourth place and essentially ran in the top-10 from that point on getting as high as third.

The second decision came when the team decided to make their final pit stop a few laps early to give Barrichello the fuel needed to chase the cars ahead of him. The second decision was validated seconds later when Barrichello called in to say that there would be a full course caution after witnessing his teammate, Kanaan, make contact with the wall after the exit of the chicane.

“We had another top-five finish which makes me very proud.” Barrichello said. “I didn't want to get involved in that melee right at the end of the race. I am sorry if people thought I was a little bit aggressive towards the end with Dario and Will. In the case of Dario, I had run out of lock which is why I went in wide, I had no intention to push him wide.

Regarding Will, I took avoiding action, everything stopped ahead of me and then I ended up on the inside. I was happy with the race and the car from the moment I arrived here I fell in love with this track and am pleased I was able to bring another top-five finish home.”

Barrichello, a veteran of 19 Formula One seasons, but in his first IndyCar season, contested his first race in Baltimore today. This is the international super-star’s second top-five finish of the season after placing a season high fourth last weekend in Sonoma.

The 40-year-old Brazilian, who has seven top-10 performances in the first 13 races of his IndyCar career, earned 30 points today and moved up three places in the championship standings to 11th with 277 points, 28 out of 10th, Not surprisingly, five of the seven top-10 finishes have come on street/road circuits..

Viso, in the No. 5 CITGO | PDVSA – KV Racing Technology Chevrolet/Firestone entry, had an incident yesterday in qualifying, and started 22nd after the penalties. However, in today’s contest he showed focus and determination. Like Barrichello, Viso pitted early, on lap two, to shed the primary tire for the alternate one and to get open track. 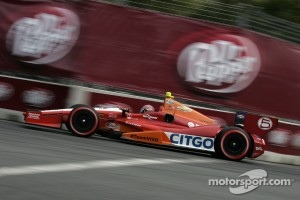 However, he was the first of the drivers to put on the rain tire, which as the track got slipperier proved to be the right move for him as shortly thereafter he found himself in ninth place as other drivers either pitted for rain tires or crashed. Unfortunately, when other drivers made the switch back to dry tires on lap 23, he chose to remain on rain tires for a couple more laps and dropped to 18th place by lap 26.

He was still 18th when the team made a strategy decision and pitted Viso for what would prove to be the final time on lap 42. In order to make the strategy work, Viso was required to save fuel, but maintain pace for an incredible 33-lap stint, which he did masterfully.

Over the next 22 laps, the longest stretch of caution free racing of the 75-lap contest, Viso got the required fuel mileage, but also picked up five positions. Then with eight laps remaining fuel saving became irrelevant after back-to-back crashes gave three more positions.

“We could always do better, but finishing ninth was not a bad way to end the weekend after the way we started,” Viso said. “It was a very difficult and long race to drive. There were a lot of decision that needed to be made at different parts of the race. Some of them based on the weather and some of them based on how the car was handling.

I believe we made the best decision we could under the circumstances. Looking toward the final race of the season in Fontana, we have been fast on all the ovals this year and hopefully we can continue to be fast and have a good result to end the season.

Viso, 27, made his second start in Baltimore and earned his best finish surpassing a 15th place showing last year in the inaugural Baltimore race. The talented Venezuelan picked up his fourth top-10 finish of the season (including a season-high fifth at Milwaukee and a road/street course best eighth at St. Petersburg).

Three of his four top-10 finishes have come on street/road courses. Viso picked up 22 points today and one spot in the standing. He is now 19th with 234 points

Kanaan, No. 11 GEICO | MOUSER ELECTRONICS – KV Racing Technology Chevrolet/Firestone car, qualified eighth, but started sixth after penalties moved him up two spots. Starting at the front of the field, Kanaan was pursuing a two-stop strategy when he, like Viso pitted for rain tires. The move dropped Kanaan out of the top-five into 12th place and four laps later, on lap 23, when he pitted again to put on dry tires he fell to 17th.

From then on, Kanaan began a march through the field that culminated with him sitting in second place on lap 51. Now inside his fuel window the team decided to pit. Kanaan, wanting a good “in” lap to maximize his position began to push and unfortunately caught the curbing on the exit to the chicane that was installed on Friday night, which sent his car into the wall damaging it beyond repair.

“It was too bad for the GEICO | MOUSER ELECTRONICS guys the way the race ended,” Kanaan said. “We had a pretty good car. I was just pushing hard on the last lap before a pit stop and I made a mistake. The crew told me it was okay. Now I just have to focus on Fontana and the battle for the A. J. Foyt oval championship.”

Kanaan made his second appearance in Baltimore. Last year he went from the last row to the podium with a third place finish The 37-year-old Brazilian, who is immensely popular with the fans, earned 12 points today, but dropped two positions to eighth in the championship race with 339 points, 33 out of fifth.

He has earned eight top-10 finishes this year including seven top-six showings with three podium performances (season-high second at Milwaukee and thirds at Iowa and Indy). Five of his top-10 and four of his top-six finishes have come on street/road circuits.