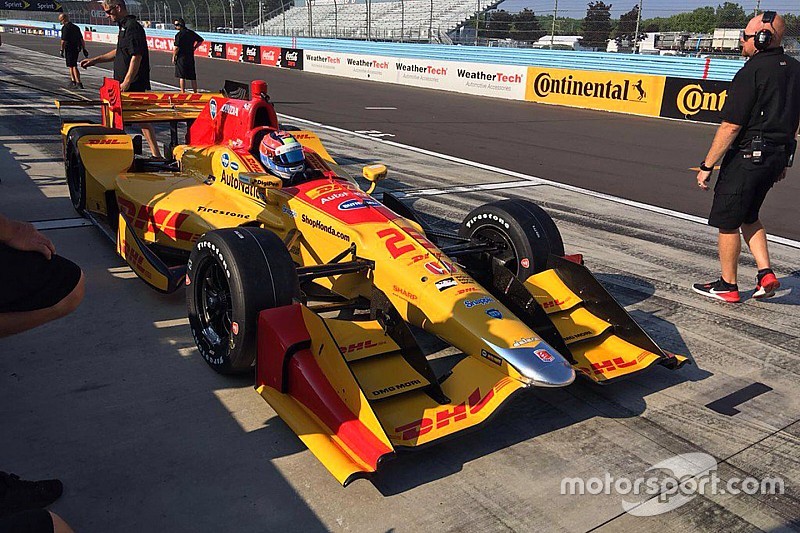 Dean Stoneman, Shelby Blackstock and Dalton Kellett were impressed with their first test of IndyCar power and downforce after their inaugural test at Watkins Glen yesterday.

Dean Stoneman, used Ryan Hunter-Reay’s car to set a best time of 1m27.14sec over his 38 laps around the 11-turn course. That was less than 1.2sec off the 2012 IndyCar champion’s best before the rain fell.

Said Stoneman: “I took about five laps to get a feeling for the car, and over the runs we were able to get quicker and quicker, making improvements more and more.

“I was looking at Alexander [Rossi]’s data compared to mine and just seeing where I could improve. There are some high-speed corners that just rely on confidence from me - knowing what the car is going to do and the way it behaves.”

He said: “The day started out good, we progressed really well. Once we put on the sticker tires, I was able to feel the real weight of the steering. Luckily, when Carlos jumped into the car right after me, he said it was a bit excessive too.

“That was the only fall back I had. We were going to try the steering a bit lighter for the afternoon session, but unfortunately the rain started and we didn’t have the opportunity to go back out.”

Dalton Kellett shared Marco Andretti’s #27 for his maiden IndyCar test and set a best time of 1:29.96 within his 50 laps. He commented: “Getting used to the physicality of the car and track has definitely been an adjustment. The steering wheel was not as heavy as I thought it was going to be but there’s definitely a lot of force on the neck.

“There’s lot of power – the response from the Honda engine is very good – [and] it’s a lot of fun to drive. Just the way the car handles the curves and the way you can really tackle the entries.”

“I think it was good from a team perspective,” said Rob Edwards, AA’s director of engineering and race operations. “All three of the Indy Lights drivers did exactly what we were looking for them to do.

“We felt having the Lights drivers in first, then the regular drivers, gave the Lights guys a chance to really think about what had happened in the morning and how to build on it for the afternoon session. [But] we have some unfinished business, as we were unable to complete the program due to weather.

“Overall, we are happy with the first half of the day, but disappointed with the second half purely because of the unfortunate weather.”

Schmidt aims to keep Hinchcliffe and Aleshin for 2017

Dixon: IndyCar suits me over “crazy” tech of F1