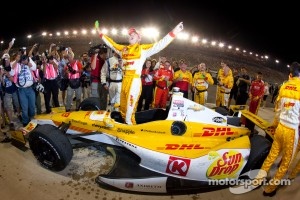 Ryan Hunter-Reay Team DHL/Sun Drop Citrus Soda Chevrolet, No. 28 won his first IZOD IndyCar Series championship this evening by finishing fourth in the MAVTV 500 to top Will Power by one point in the season championship.

This is the fourth championship for Andretti Autosport, and Hunter-Reay secured the title by winning a league-leading four races in the 2012 season. Hunter-Reay also signed a two-year contract extension with Andretti Autosport prior to the race weekend. He is the first American driver since 2006 (Sam Hornish Jr.) to win the IndyCar title.

About finishing fourth to clinch the title: "Man, did we do what we had to do! I cannot believe this. It hasn't sunk in. We just raced 500 miles but we got the championship for Andretti Autosport, DHL, Sun Drop, Circle K, Chevrolet... Man, this is a dream come true. Thank you to all the fans for coming out tonight.

"There were a lot of good cars out there tonight and to be able to put that together was tough."

About his decision to sign two-year contract extension with Andretti Autosport: "This is the right place to be, absolutely. The team - I can't say enough about 'em, This is a total team effort. This whole championship came down to all the cars we had, and the drivers like Marco (Andretti), James (Hinchcliffe) and Sebastian (Saavedra) coming in today - it was a total team effort.

We struggled with set-up, but we put it all together, and we went out there and performed and brought it home when we needed to. We've won the championship by one point, and man, did we have to fight for it."

The late red flag wasn't what you wanted to see?: "I just wanted to get set back into a rhythm..., but I knew after that red flag I was just sitting there and thinking the tires would take another heat cycle and that we would slide around a bit more.

Everybody raced tough, but they raced clean and my God... I don't know about the race but we just kept making (the car) better and better and they did a great job with the radio and the guys did a great job in the pits. This hasn't sunk in yet as I am just full of adrenaline. "

How close were you to Will Power when he crashed? : "You know, I don't know, he (Will Power) was right next to me and I saw him lose it. I feel like it was pretty close but I have no idea, you tell me."

This is the fourth IZOD IndyCar Series title for Andretti Autosport. The others were Tony Kanaan in 2004, Dan Wheldon in 2005 and Dario Franchitti in 2007.

"This is an incredible day. It wasn't going so good right at the start there - we were struggling a little bit - and then we saw Will (Power) have his unfortunate accident and we knew it was open from there. We needed to get the job done and it was a lot of hard work.

Ryan did a helluva job, and the whole team did - getting the car better and better throughout the race. We had enough there at the end to get it done. I'm just so proud of everybody here with the DHL/Sun Drop team... There's a lot more to come. This team is still getting better and better and I think we're going to be even stronger next year."

Marco Andretti started on the pole (his second career pole position), led the race early, and then recovered from a faulty clutch that caused the car to stall on several pit stops and a late-race penalty to finish eighth.

"It's a good thing we were prepared for war tonight. That's what we had. It was just fight, fight, fight. We were fast, but we had some clutch issues that caused us to stall a couple of times in the pits, so we would drop back and then have to claw our way back up there. I wish we could have had a better result after starting on the pole, but we tried our hardest.

"Congratulations to Ryan (Hunter-Reay) on the championship, they deserve it, and the whole Andretti Autosport team worked really well together this year. Winning the championship is a great reward for everyone in the company."

James Hinchcliffe and the Go Daddy team were strong early in the race, but dropped back to finish 13th.

"This is one of those times when we're all hoping that we get back to the shop and find that something was broken on the car. We had such a strong first stint, we moved up to seventh, and the guys were great in the pits and then it just fell off the wagon as soon as the sun went down.

I'm not sure if it was just the set-up or a problem, but either way a very tough day for the Go Daddy guys. They deserve better than that. I really wanted the season to end on a high note, so for us it's a bittersweet day. With Ryan taking the championship, it's huge for the team, and big congrats to him and everybody on the team for working so hard all year. We're thrilled for him."

Making his third start of the year in the AFS Racing Chevy, Sebastian Saavedra ran in the top-10 early in the race before being forced to retire with mechanical woes. Saavedra was credited with a 21st-place finish.

"I had a blast, to be honest, and I think we need to focus on the positive side of this race. It was an unfortunate situation where the tire temperatures just took us out. We were doing an amazing race. We had a top-five car, but you know at the end I'm very happy to race with my teammates up-front there.

And for (Ryan) Hunter-Reay, to be a part of team that wins the championship, to be a part of that process, and just so proud of them and big congrats to Hunter-Reay. This is the beginning of something big. We'll keep focused for next year and bring that No. 17 car back."