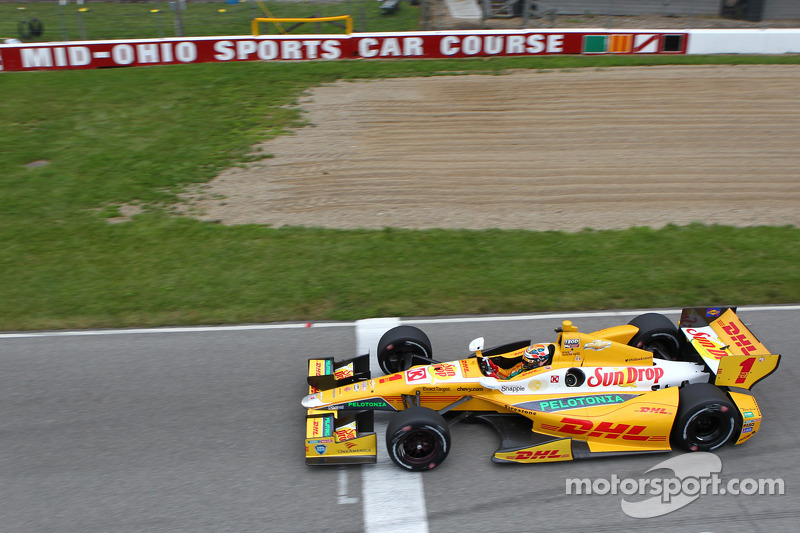 The reigning IZOD IndyCar Series champion showed no ill effects for a two-week layoff turning a lap of 1 minute 5.6358 seconds on the 13-turn, 2.258-mile road course to lead the one-day IZOD IndyCar Series Open Test in advance of the Honda Indy 200 at Mid-Ohio.

"It was a good day," said Hunter-Reay, driver of the No. 1 DHL Chevrolet. "Made some major gains and we're pretty happy with the car. This track is similar to Barber and we've been quick on the big natural terrain road courses. I'm happy with the work that the Andretti Autosport boys have done over the last two weeks and I'm sure we'll find even more speed for Friday."

Scott Dixon, who has won the last three IZOD IndyCar Series races and is aiming for his third straight win at Mid-Ohio, was sixth at 1:06.1025. A little more than a second separated the top 16 drivers on the timesheet.

Hunter-Reay expects the field to be just as tight when practice for the Aug. 4 race begins on Aug. 2.

"I expect the Penske and Ganassi boys to be right up there on Friday," Hunter-Reay said. "It's going to be super-tight as it always is here. Hopefully, the No. 1 DHL Chevy can stay up front."

De Silvestro really gets into her role:

De Silvestro, who drives the No. 78 Chevrolet-powered Nuclear Clean Air Energy IndyCar, spoke about the connections between racing, clean energy and engineering. She also participated in the hands-on activities, including donning the protective safety clothing used by nuclear energy facility personnel during outage service activities.

"They call it the banana suit, which was pretty funny," De Silvestro said during a break at the Open Test. "I think my driving suit is a lot more comfortable.

"It was awesome to see the girls take an interest in the program and what's available. I told them that in racing I wouldn't be fast if I didn't have engineers behind me to make the car go fast and the same thing is in the nuclear clean energy business. The other thing is the teamwork we have so it all kind of ties together."

Firestone Racing took advantage of the morning rain at Mid-Ohio by having Hunter-Reay compare the current spec and new-for-2014 wet tires on the road course. ... James Jakes, driver of the No. 16 Acorn Stairlifts car for Rahal Letterman Lanigan Racing, celebrates his 26th birthday on Aug. 4 (race day). ... Justin Wilson turned 35 on July 31. ... Ryan Briscoe will join Leigh Diffey and Townsend Bell in the NBC Sports Network broadcast booth for the Mid-Ohio race.

Helio Castroneves (No. 3 PPG Team Penske Chevrolet): "The PPG crew guys did an awesome job. We got a bit of a late start due to the rain this morning but we were able to use the entire afternoon session to test a few things for the race this weekend. I am happy with the set-up of the car and the track seems to be getting faster and faster every time we went out. But today gave us a good gage as to where we are and I'm excited to get back behind the wheel on Friday."

Will Power (No. 12 Verizon Team Penske Chevrolet): "It was a good day for our No. 12 Verizon Chevrolet. This track takes rubber (from the tires) all day and with that becomes quicker and quicker. The team made great changes to the car and we will continue to work on it during practice on Friday and see if we can improve. Overall, I'm happy with the day and look forward to the rest of the week."

The next IZOD IndyCar Series race is the Honda Indy 200 at Mid-Ohio on Aug. 4 at Mid-Ohio Sports Car Course.

The tale of the turbo in IndyCar: let’s all just get along