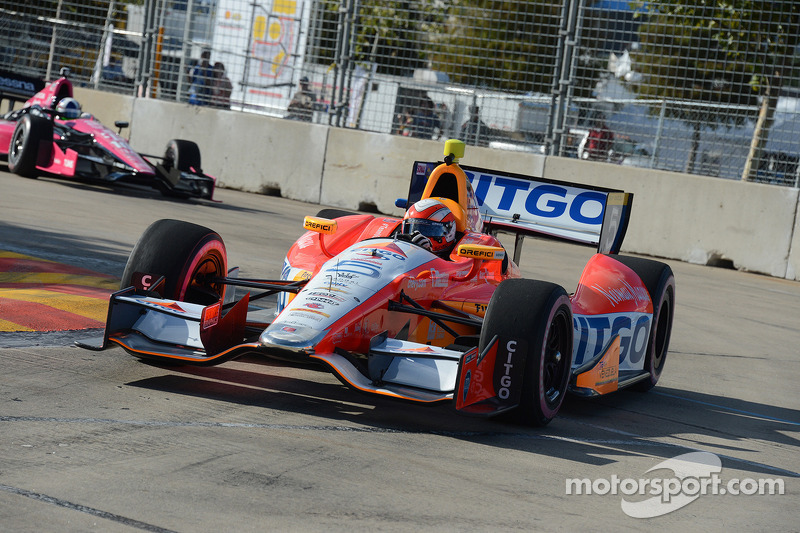 E.J. Viso, No. 5 Team Venezuela PDVSA CITGO Chevrolet Seen as high as fourth place and remaining in the top five for most of the race, Viso was sidelined by a full course caution just as he was about to enter the pits for a stop; the missed moment put the Venezuelan back to P15. The 28-year-old was able to secure his seventh top-10 finish of the season with a ninth place and will mark his 100th career start during tomorrow's Race Two in Houston. 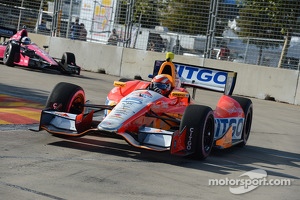 "Well definitely a very difficult race; very physical, very demanding for everyone in the crew. Strategy was crucial, and I think it's one of the things we got right. Even if we hadn't had the right strategy, we unfortunately got messed up by a yellow flag where they closed the pits just as we were on our way in (to pit). We needed to make up some spots after that spot, and we did - back up to ninth. I'm grateful for the team - I had a very competitive car even when the Hondas are fast this weekend... I think we still had a good chance of finishing in the top three or four." 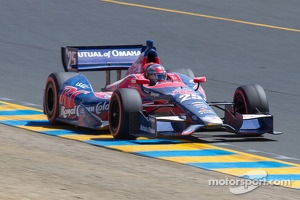 Marco Andretti, No. 25 RC Cola Chevrolet Starting from the 10th-grid position, the third-generation racer fought his way through the field on the streets of Houston around the Reliant Park Stadium circuit. After his second pit stop, the 26-year-old lost momentum on the 10-turn track dropping a few positions in the 90-lap race. Andretti brought the No. 25 RC Cola Chevrolet home to a 13th-place finish and remains (unofficially) fourth in the championship points fight. "I think we need a more predictable car for tomorrow. The race was there, but it takes too long to get there with the car. I have to sneak up on it and we lose too much time coming up on tires. I lose my strength on the restarts because I don't have predictability. The car doesn't tell me what the limit is and it could potentially stick. It's very unpredictable which makes for a long 90 laps, so hopefully we can find what we need tomorrow for the No. 25 RC Cola Chevrolet." 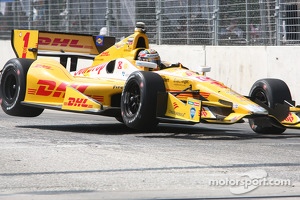 Ryan Hunter-Reay, No. 1 DHL Chevrolet Reigning series champion and Texas-born Ryan Hunter-Reay took the green flag from the 15th position and was advancing on the competition early in the race. Working his way comfortably inside the top 10, the American was on target for a top-five finish when the No. 1 car suffered mechanical issues. Hunter-Reay was forced to retire from the 90-lap race on Lap 56 and recorded a 20th-place finish. He remains fifth in the points standings (unofficial) entering his 150th career start tomorrow. "The dash just said low pressure, so something in the gear shifting mechanism lost pressure; I think we might have melted a line back there somehow. I don't know how many races this season we're sitting here watching the end of the race instead of being in it. We had a good day going on and the guys worked hard, I was hanging on to a car I'm not really comfortable with at the moment. We're going to make some changes for tomorrow, but I think we had a top five car. The track is brutal, the heat isn't an issue, but the bumps are just brutal and playing havoc on our setup right now." 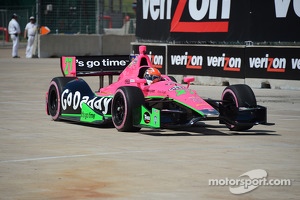 James Hinchcliffe, No. 27 GoDaddy Chevrolet Canadian James Hinchcliffe and his pink GoDaddy machine gridded in the sixth position for Houston's Race One today. Unfortunately, Hinchcliffe never made it off the grid as car stalled during the standing start. Stranded in Row Three of a hot grid, the fan favorite was hit from behind as competitors tried to make their way around him to the green flag. The No. 27 car did not return to the race.

"We're just really disappointed with our run today. You hate coming all this way and getting everyone working as hard as they have with the trouble that we have had with the track and everything, but we were about ready to put on a good race and the GoDaddy PINK car was good starting in the third row. These guys (Andretti Autosport) are always good in the pits and good on strategy and I was really confident. I was looking forward to my first standing start because we didn't make the one in Toronto. It's just tough, it's a tricky thing to do, but I guess the good news is that we have the chance to do it all again tomorrow. I really wish we had been able to run though; I was for sure looking forward to it. Thanks to Andretti Autosport and the fans who are sitting out here in this ridiculous heat and sticking by us all weekend."

Sato wins pole for Foyt in Houston; has trouble in race one