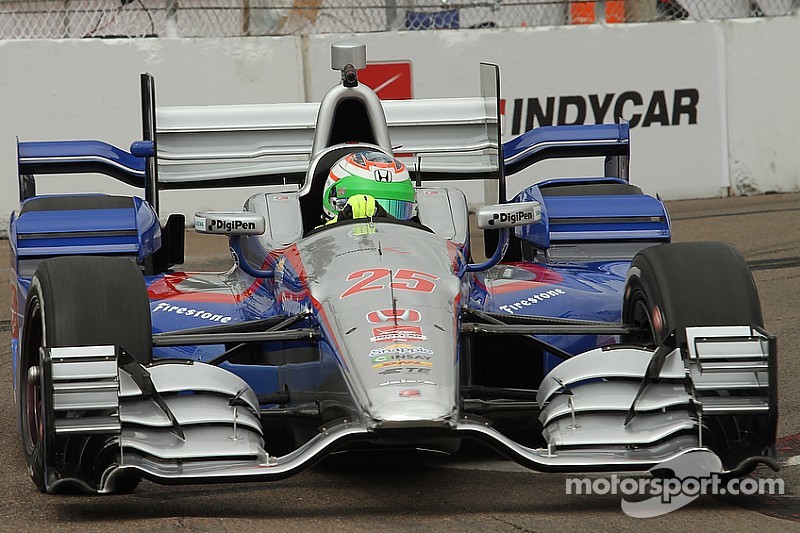 Who will drive the fifth car, should the proper sponsorship be acquired?

Today, Andretti Autosport announced a partnership with British driver Justin Wilson, who will do both the Indy GP and Indianapolis 500 for the reigning victors of the event.

"We've been working on this for four of five years, trying to get Justin in one of our cars," Michael Andretti revealed. "The goal is to get him in a lot more, but right now we can announce that he will be doing the Indy GP and Indy 500 with us. I'm really thankful to Honda for helping to make this happen."

Since the team has been working on a deal to put Wilson in one of their cars for so many years, what was the tipping point that made it a reality for 2015? "Honda was the biggest factor for sure," said Andretti. "We're still looking for a primary sponsor and hopefully that sponsor will want to be on board so we can do more than just these couple races."

Despite being out of a full-time ride for the first time in his career, Wilson is happy with this two-race deal, and for obvious reasons. "It may be just two races but it's the two best races. Knowing that you're driving an Andretti car gives you a slight edge and I'm looking forward to that. I'm still good friend with Dale Coyne, we haven't ended things on a down note. It was just time for him and myself to look for something different."

Who will be driver number five?

Going into Indy, the current Andretti lineup has Ryan Hunter-Reay, Marco Andretti, Carlos Munoz, and of course Wilson. However, Michael has his sights set on putting together another fleet of five cars that he will take to Indy, saying "The goal is to run five cars for sure at Indianapolis.

As for who could pilot the car, it's unlikely Kurt Busch will return with his recent off-track dramas and just now getting his NASCAR ride back. One name many people are throwing around is a driver who is actually taking part in the season-opener this weekend with Andretti. Yes, Simona de Silvestro.

"We are pushing hard to get her in the car for more than just this race," Andretti stated. "She did her first test with us the other day and every single person that was at that test were really impressed with what she did, not only with her pace on the track, but what she was able to offer outside the car."