Alonso says IndyCar is “something special” after road course test

Fernando Alonso was enthusiastic after completing his test of an Andretti-run 2018 IndyCar at Barber Motorsports Park.

Alonso conducted the running in the car last used by Carlos Munoz at the Indianapolis 500, converted to road-course spec.

McLaren has been keen to keep the test as private as possible, with no media or fans allowed to attend.

Motorsport.com understands that series chassis builder Dallara had no presence at the test and IndyCar's support was only minor and was understood to be nothing more than "procedural".

Despite threats of poor weather caused by Hurricane Gordon, Alonso revealed he ran in all track conditions.

“It was a good day, a fun day," said Alonso. "I love to test new cars and to test the IndyCar on a road course is something special.

"I’ve been lucky enough to test it in wet conditions, in intermediate conditions and in dry conditions, so overall I had a good feeling on every type of track.

"The weather was good for us today – a little bit of wind in the afternoon but overall a positive day.”

The test was Alonso's first experience of a road course in an IndyCar, his only previous experience in the series coming at the Indianapolis Motor Speedway iconic oval.

He did, however, attend the Barber weekend last year as he became more familiar with the IndyCar paddock ahead of his Month of May.

“Probably my instinct will tell me [I prefer the] road course, because it’s what I’ve been used to doing all my life, but the Indy 500 was an amazing experience, so 50/50," he said.

"I think I love the way the car feels on a road course, but I love the way you compete on ovals, timing the tows, traffic and all the overtaking maneuvers I think are a little bit easy on the ovals, so in terms of track action I loved the Indy 500.”

Alonso added that the test was on his "bucket list", with Motorsport.com understanding that Andretti had booked several potential test dates this year, for whenever Spaniard became free to try an IndyCar.

"It was something [the test] that I was looking for last year already," he said. "I had some options to test the car on a road course after the Indy 500.

"We didn’t find the time but this year it’s definitely happened now and I’m happy for this.

"I love being behind a steering wheel, and definitely a new car, a new experience, learning a lot of things from the team, the engineers, everyone, so a happy day.”

Alonso has previously stated that the test will have no influence on his racing future, with the McLaren driver set to exit F1 at the end of 2018.

Motorsport.com has been told that Dallara has had no direct approach from McLaren over a supply of cars, with multiple sources suggesting that McLaren's "fluid" IndyCar future is more likely to be an affiliation.

Andretti is the favored outfit, having worked with McLaren at the 2017 Indianapolis 500 as part of Alonso's ‘triple crown’ bid.

McLaren had previously approached Scott Dixon and Will Power over a drive for its team, and McLaren CEO Zak Brown has previously stated that the team's potential IndyCar future would be decided this month.

McLaren had prioritized sorting its 2019 F1 line-up and it completed the decision this week by promoting Lando Norris to partner new signing Carlos Sainz. 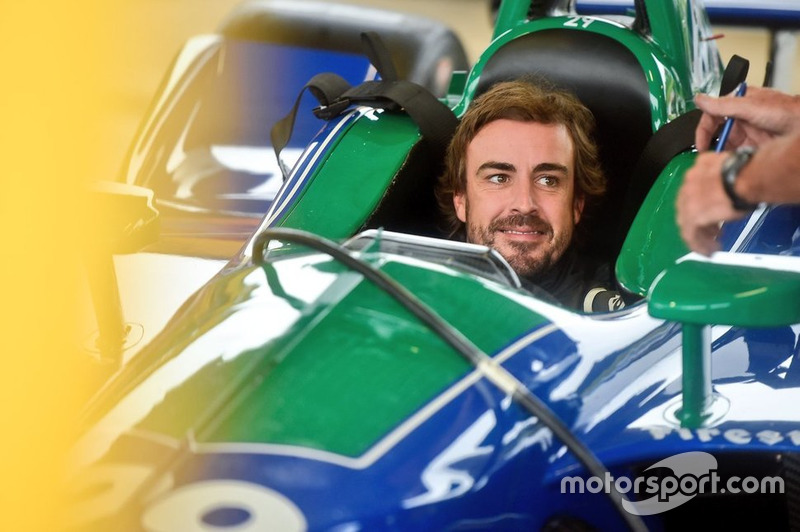 O’Ward, Herta in contention for two-car Harding team in 2019