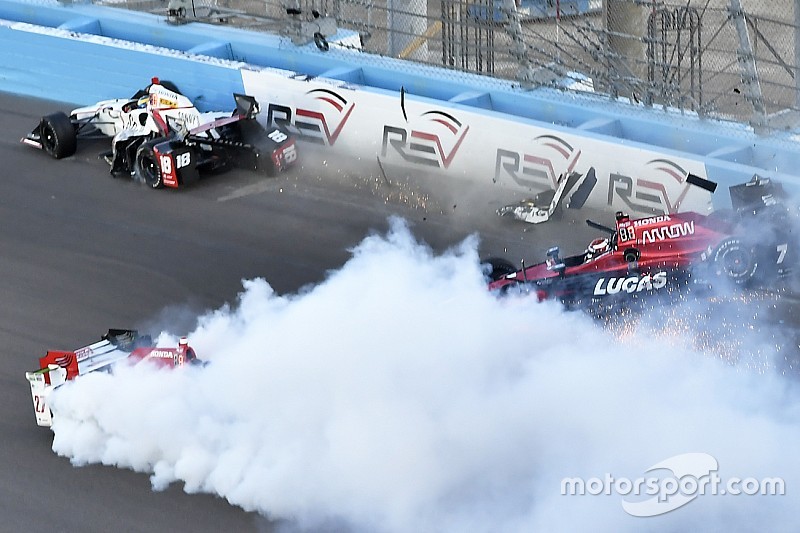 The first-lap shunt at IndyCar’s Phoenix race had huge knock-on effects for the teams involved. David Malsher asked Dale Coyne Racing’s Craig Hampson and Todd Phillips how hard it’s been to recover in time for this weekend’s IndyCar GP.

Imagine you’re an IndyCar team owner whose driver has led the championship for the season’s first three races, on account of a win, a second and an eighth place. Basically, the results show that reuniting one of the best U.S. open-wheel racers of the last 20 years, Sebastien Bourdais, with the genius race engineer who helped him win four Champ Car titles at Newman/Haas Racing, Craig Hampson has been a very worthwhile investment.

For the fourth race, at Phoenix, Bourdais qualifies 10th and a fifth- or sixth-place finish looks a possibility for the race. Instead, before even a lap is completed, another driver makes an error and in the ensuing five-car accident, Bourdais’ car is slapped hard against the wall. You leave the track knowing there’s going to be a big hole in your bank account, a huge amount of work ahead for your team personnel and that your driver has slipped to fourth in the points table.

The hand of Fate dealt some very low cards to Dale Coyne in Phoenix and the result has been a hectic battle for his crew ever since. Just a couple of days after that painful evening in Arizona, both Bourdais and teammate Ed Jones were supposed to test their DCR-Hondas at Gateway Motorsports Park, the 1.25-mile oval in Madison, Ill. Instead, the rookie had to share his car with the St. Petersburg winner while the #18 crew rebuilt the damaged car.

Coyne, unlike many underdogs in racing (and several other sports), does not constantly remind people of his status, but the fact remains that the Plainfield, Ill.-based team is small and that shunt was one he could ill afford. Even more sympathy should be thrown the way of team personnel who will arrive at Indianapolis for this weekend’s Indianapolis Grand Prix relieved to at last be out of the race shop and not rebuilding the skeleton of a car.

So here are two perspectives on the spannering and wrenching battle for DCR since Phoenix. The first comes from Todd Phillips, the #18 car’s crew chief, but as Hampson then reveals, Phillips is stoically playing down the extent of the task.

Between them, they provide a salutary lesson to anyone who wishes to become a crew member in an IndyCar team. Do you really want this life?

“I don’t know the exact figure it’s going to cost Dale,” says Phillips, “but he and Darren [Crouser, team manager and strategist] were saying that the cost was comparable to a small family home. OK, they were joking around, but what we do isn’t cheap and ovals aren’t kind when it comes to accidents. Pretty much everything had been touched one way or another.

“The tub had done a good job of protecting Sebastien, but the underside of the car had slid sideways which transferred heat to the chassis which got the resin warm enough to soften it, but thankfully it was mainly cosmetic.

“Replacing the corners of cars is easy; any mechanic can bolt on wishbones and suspension arms. When you start getting into bodywork, that’s where the detail work starts. Every piece is fitted and rubbed on very, very carefully, especially when Indy is coming up and aerodynamic purity is of prime importance. Every bit of drag adds up, so it takes a lot of time to get it right.

“And that’s how the series has evolved. There’s no innovation as such, but there’s infinite time-consuming fine-tuning to be done.”

Repairing bodywork is vital for another reason, too; at the end of this season, much of that visible kit will be rendered obsolete as the Verizon IndyCar Series reintroduces a common aerokit for 2018. Therefore team owners aren’t currently keen to order brand new parts.

“Yeah, we’re definitely getting to that point where you’re second guessing – ‘OK, do we really need this?’”says Phillips. “We’ve purchased everything we perceive we’ll need, so if it can be repaired safely, we’ll do that rather than just order a new part.

“Thankfully though, Dale is a true racer. Since I’ve been here [February 2012] I don’t recall a single time when he has said ‘no’ to anything if he sees we need it to be competitive. This team is not just working to survive; Dale is fighting to succeed and as we’ve seen, sometimes he does that. Sure, we’re small and we’re not Penske or Ganassi, but the spirit within Dale is the same as you’ll find with Roger and Chip; he wants to win and he’s truly passionate about it.”

But whereas Roger or Chip might have the luxury of pulling out another chassis, the #18 car’s repairs are necessary. At the Indy 500, Pippa Mann is due to run a third DCR entry alongside fulltimers Bourdais and Jones, and between them they will have just one spare. So despite Bourdais being a huge talent with 36 Indy car wins to his name, despite Jones being as composed and smart a rookie as we’ve seen in IndyCar in recent years, and despite Mann being a wise veteran of five previous Indy 500 campaigns, the Coyne team must be approaching the 500 with some trepidation.

“It’s part of the deal,” says Phillips, “but yeah, it’s a high-speed oval and there are no small accidents, so we need to have the spare ready. Knock on wood, we don’t have to use it for any our three drivers, because it will make our Detroit turnaround a lot easier…”

Yes, another significant part of the strain on IndyCar team members is the compact schedule. Two days after Saturday’s Indy GP, practice starts on the IMS oval and goes on for eight days. Four days after the 500, the IndyCar teams will be unloading in Detroit for a streetcourse double-header; four days after that, they will be down south in Fort Worth, Texas, for another high-speed oval… Again, let’s remember, Coyne’s squad is not Team Penske-size.

“I’d say we have a dozen guys," says Phillips, "and five of those have been working on the #18 car. We all have job titles, but we do a lot of extra things, too. And if the part you want to work on next isn’t ready because you’re waiting on one of your colleagues to finish his area of expertise, you do something else. All of us are always busy. It’s about being smart and self-motivated with our time.

“Thankfully, motivation isn’t a problem; everyone here wants to do well. Getting Craig and Sebastien working together meant we came into the season with high hopes, and winning St. Pete and taking second at Long Beach boosted those hopes. But that just makes you want it more! We have to be realistic; we’re not always going to be able to compete with the biggest teams, but that doesn’t mean we’re not going to try.”

Hampson, back when his axis with Bourdais ruled Champ Car a decade ago, used to look exasperated if he was anywhere but Victory Lane. These days he’s far cheerier, but the Phoenix accident gave him a very legitimate reason to feel troubled once more.

He blames himself for not further trimming out Bourdais’ car in qualifying to get higher up the grid and thereby avoid the midfield mêlée but his mea culpa is unnecessary: he truly wasn’t to know. Heck, there were different setups across the four Penske cars in qualifying because no race engineer was certain which would be the best downforce/trim compromise that evening.

Regarding the accident itself, Hampson says: “Sebastien was going 157mph when he first hit the brakes in response to Aleshin's spin and made first contact going about 138,” and as Phillips suggested above, the shunt was democratic in its distribution of favors to the #18 car. Not much of it was left unscathed.

“The IndyCar safety crew had the wrecked car back in the garage about 35 laps into the race and the #18 mechanics immediately unbolted and sawed off the broken suspension corners,” Hampson explains. “Aleshin had gotten into us on the left and that pushed us into the wall on the right. Every steel suspension link on the car was damaged, the sensor wires along each wishbone were lost and the four suspension rockers were toast, too.

“The underwing was blasted in on both sides, and that crushed the sidepods, radiator boxes and radiators. The exhaust system was flattened, and on one side the carbonfiber engine air intake was fractured, which meant the engine ingested a load of shards. HPD issued us a new engine at the track but now they’ve managed to repair the original unit and so, according to IndyCar rules, we’re supposed to continue using it. So now we have to re-install the original engine, but it isn't here yet so we’ll either do that task either this evening [Tuesday], or at the track.

“The right-rear impact pushed the driveshaft through the final drive spool, but we believe the gearbox itself is OK. We replaced all the bearings for the final drive and it’s back on the car for Indy GP.

“The rear wheelguard, lower beam wing, and main wing were totally destroyed. We ground the bottom off the front wing mainplane and broke both endplates, though the flaps somehow survived. Oh, and we also destroyed a brand new set of wheels which we’d bought just before the Barber race.

“So at the track that evening, Todd made a list of what to buy from Dallara, and we purchased all the parts we could, there and then. In terms of Honda [aerokit] bodywork, I made a list of parts needed, and HPD was good about supplying what they could immediately. Problem is, all five cars in the crash were Hondas, so pieces were at a premium…”

Inevitably the #18 car couldn’t test at Gateway the following week, so that crew and the wrecked car went back to the DCR shop in Plainfield, while Craig and Sebastien accompanied the #19 half of the team to the test. The one vaguely bright point, in retrospect, was that losing a car from the test didn’t hurt the team’s preparations for the race since Gateway suffered track surface problems plus conditions were far colder than the teams can expect at the race in August.

So the team only has to deal with lost money, lost hours and lost sleep…

“I feel really pained for Dale and [wife] Gayle Coyne,” says Hampson. “They’re having to pay full freight for all the damaged and replacement parts, and the total bill is going to be staggeringly high, which puts a big dent into the team's budget for the year. That money will need to come out of some other basket which might have been designated for something like R&D or an extra employee or two.

“And my colleagues here really needed and deserved a short break leading into what is about 48 straight days of work on Indy GP-Indy 500-Detroit-Texas-Road America test. Now they likely won't get a rest day to see their families or catch up on daily life. It's not good to start a marathon already tired…”

Sure, you can say that the potential for this kind of situation is what team personnel accept when they sign up; it’s part of the deal, like Phillips said. But this particular confluence of circumstances is a grinding reminder that the hard road isn’t far from Victory Lane.