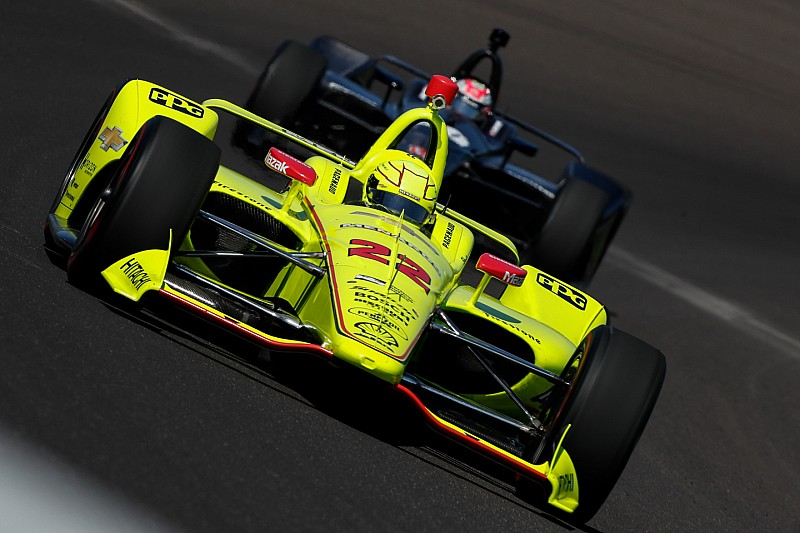 Simon Pagenaud says that the spec Dallara aerokit is difficult to adjust to as drivers attempt to restrain themselves from “trying more, pushing more” as they did in the 2015-’17 manufacturer aerokit era.

Pagenaud was second fastest in today’s open test at Indianapolis Motor Speedway, setting a 225.910mph lap time, with the speedtrap before Turn 3 clocking the #22 Penske-Chevrolet at 233mph-plus.

The 2016 IndyCar champion said: “It was really a good day of testing. Great day, great conditions for testing, as well.

“The universal aerokit is quite different [compared with the 2015-’17 manufacturer aerokits]. It behaves quite a bit different to what we've been used to the last few years. But overall it's quite decent. The car is very stable. It sucks up pretty well on the straightaway.

“I think the racing is going to be interesting. I think it's still early days to tell how your car is going to behave in traffic. We're just scratching the surface at the moment with what we need to go out and try to win the race.

“It's definitely a big adjustment. I think it's actually harder for us to have been driving those cars for so many years where we had to adapt to more grip, trying more, pushing more, pushing the limits away. All of a sudden we’ve got to go the other way, which is very hard for a racing driver, to actually hold yourself back. It's really difficult."

The Frenchman said  che wasn’t sure what speeds might be seen in qualifying, observing: “We don't have as much [ability] to trim the car out.

“But, you know, we'll see. I think it's plenty fast anyways. I think the racing is going to be good, as well.”