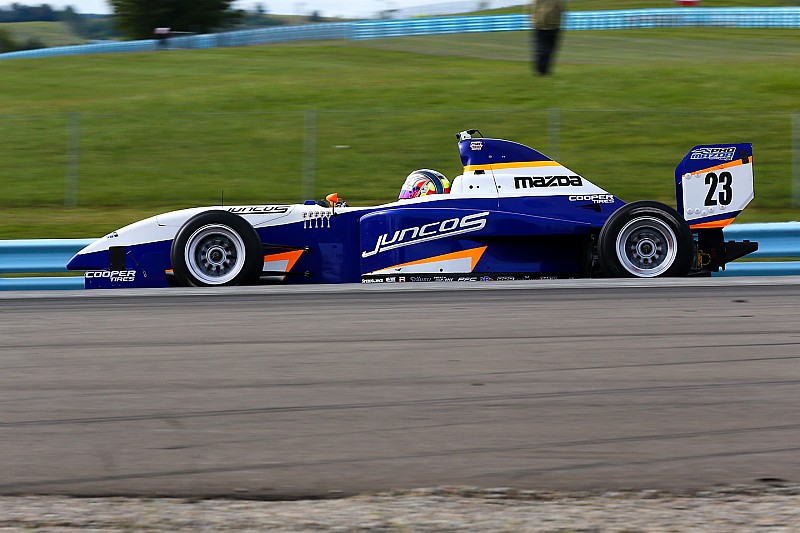 Franzoni immediately pulled away from pole ahead of second-placed qualifier Cunha. Martin, who had been relegated to fifth on the grid, rocketed into third on the first lap, and soon started pressuring Cunha for second place. However, the Aussie who last year won the USF2000 titlem, spun on Lap 4, leaving him 5.2sec to make up to the Pelfrey car, and over 12sec behind Franzoni.

However, by this time he was getting warnings for running beyond the curbs at Turn 1 – beyond the track limits, in other words – in order to take a wider arc and carry more momentum down the hill. Refraining from doing this slowed his progress, but didn’t halt it. Cunha, meanwhile, got his deficit to Franzoni down to under four seconds, but the leader responded with a lap faster than Martin’s. He appeared to have the victory in hand.

More significantly, Martin blew his chances for a second time, this time at the Bus Stop on Lap 11, and next time by he was 3sec off Cunha. Then, as a dry line emerged, Cunha proved able to maintain Franzoni’s pace – albeit more than five seconds behind – and was able to pull away from Martin. ‘

Only a full-course yellow could salvage Martin’s championship hopes, and it never came. Franzoni crossed the line only 1.6sec clear of Cunha who was the only driver to set a couple of laps under the 2min barrier. Martin was a further 9.5sec down.

However, he should (eventually) be satisfied with a season in which he scored five wins, six other podium finishes and six pole positions in the 12-race Pro Mazda championship. He simply couldn’t match the consistency of Franzoni whose dozen races were divided into seven wins and five runner-up finishes, as well as five poles.

Cunha’s third place yesterday and second place today confirmed him in third place in the championship.

In today’s finale, the rest of the field, as has been the case most of the year, were way out of the picture. But for the record, Pelfrey’s Nikita Lastochkin was fourth, 38sec off the lead, and teammate TJ Fischer was a further 17sec behind.

Sting Ray Robb of World Speed Motorsports battled hard with Matt Machiko of ArmsUp Motorsports and claimed sixth on Lap 16 with little more than six minutes to go, but was 1min23sec behind the winner.