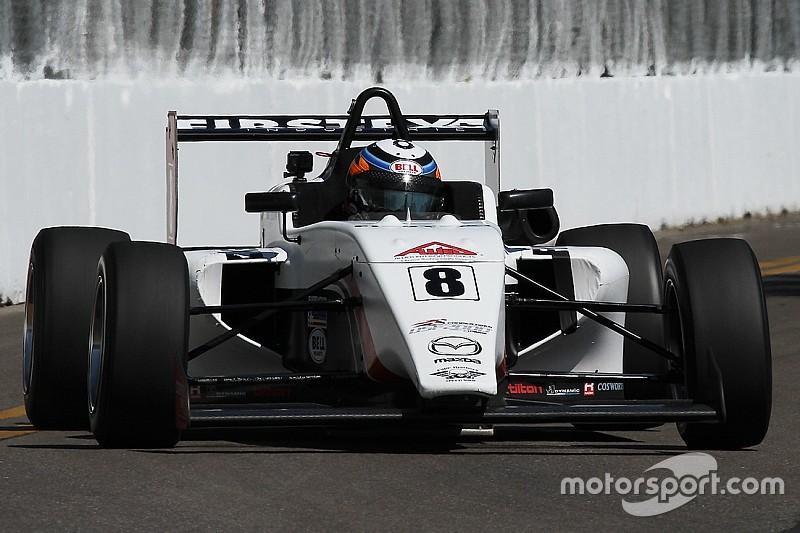 Rinus VeeKay only needed to start practice to clinch the Pro Mazda title although he was beaten by Oliver Askew and David Malukas in the races, while Kyle Kirkwood scored his 11th and 12th USF2000 wins, as Mazda signed off from its Road To Indy sponsorship.

On Lap 5, Robert Megennis moved the second Juncos car passed Robb and into fifth, but when his teammate tried to apply pressure to the leader, he could draw within 0.7sec and no further. Still, VeeKay’s fastest laps did enable him to pull some two seconds clear of Thompson, who was working hard to keep Malukas behind him.

However, the order remained static, and Askew scored his first victory of the season by 1.35sec over VeeKay who was 1.2sec ahead of the Thompson vs. Malukas battle. Megennis retained fifth, a further nine seconds in arrears, two seconds ahead of Robb.

In Race 2, Malukas grabbed the lead from polesitter VeeKay and by Lap 10 he had a 2sec lead, with Askew in third and pressuring the Juncos driver. Fourth placed Megennis was already 10sec down after clashing with Parker Thompson on the opening lap, the Exclusive driver sustaining a puncture.

As Malukas pulled away, VeeKay was having to get defensive, although the lapped car of Thompson started giving him a useful tow, while on Lap 16 Nikita Lastochkin moved passed Megennis for fourth. Megennis’ issues were compounded when he had to make a long stop, allowing Thompson into fifth.

The Canadian let VeeKay and Askew lap him at the start of Lap 26, and although the Cape driver pulled a little closer to VeeKay he couldn’t get the pass done before the checkered flag. Malukas scored his third win of the season for BN Racing, beating VeeKay and Askew by just under 3.5sec. Lastochkin was a lonely fourth, half a minute ahead of Thompson.

There was a surprisingly tidy effort through Lap 1 Turn 1 – only one driver, Lucas Kohl, forced to take the run-off – but polesitter Kyle Kirkwood lost out to third place starter Rasmus Lindh. However, a draft down the front straight saw the new champion back in the position he belongs, slotting the Cape Motorsports car into the lead, chased by the Pabst Racing machines of Lindh and front-row starter Kaylen Frederick. Exclusive Autsport’s Igor Fraga was fourth ahead of DE Force’s Kory Enders, and series newcomer Braden Eves, driving for Newman Wachs Racing.

Kirkwood could only inch away from his immediate pursuers, but by Lap 10 the top three had pulled almost three seconds on Fraga, and Calvin Ming had made it three Pabst cars in the top six by passing Eves, and demoted Enders to sixth on Lap 13. Another Pabst driver on the charge was Kohl, up from his Turn 1 faux-pas to claim ninth.

Kirkwood finally got his lead to over 1sec on the 17th of 25 laps, but DEForce’s Colin Kaminsky clashed with Julian van der Watt at Turn 1 on Lap 18, and out came the full-course caution to rescue the latter’s Team Pelfrey machine.

The restart saw Fraga try to jump past Frederick, but locked up and backed off. However, he’d done the job well, because Frederick moving right to defend missed his braking point and had to go straight into the Turn 1 runoff, sadly forcing Lindh to do the same. Thus Kirkwood led from Fraga, Ming and Enders, with Lindh recovering to gain fifth, ahead of the opportunistic Kohl, with Eves and Frederick in seventh and eighth.

That’s how they ran to the flag, Kirkwood scoring his 11th win of the season by 1.2sec with Fraga 0.8 ahead of Ming, with Enders, Lindh and Kohl completing the top six.

However, all Fraga’s efforts were in vain as he was given a 30sec penalty for avoidable contact at the start, and fell to 15th.

Lindh was on pole for Race 2 alongside teammate Frederick with Kirkwood and the third Pabst car of Lucas Kohl in fourth.

However a collision between Jose Sierra and Fraga at Turn 1 left Sierra damaged and brought out the full course yellow.

The restart saw Frederick smack into the back of Lindh at Turn 1, breaking his own front wing, and pushing Lindh through the runoff. Kirkwood took avoiding action too and also hit the escape road, and Frederick was given a drive-through penalty, while Fraga was up to fourth by Lap 5.

Kirkwood passed Lindh into Turn 1 at the start of Lap 7, while Julian Van der Watt’s Team Pelfrey machine got around Fraga on Lap 8. Kirkwood immediately tried to start stretching his lead so Lindh couldn’t slipstream past him down the long front straight but the gap extended at the rate of half a tenth of a second here, a full tenth there until finally Kirkwood had the margin out to over 1sec by Lap 11.

This pair’s efforts had pulled them 3.5sec clear of Kohl by Lap 10, who in turn was was almost five seconds ahead of van der Watt. The interest at two-thirds distance surrounded Fraga’s efforts to defend fifth from Ming and Dakota Dickerson of ArmsUp Motorsports, but they then stretched apart.

Then into the closing laps Van der Watt closed up on Kohl, they went side-by-side through Turn 7 on Lap 21, and the Pelfrey driver grabbed third place, albeit 12sec behind Lindh who’d drifted 2.3sec off leader Kirkwood. Now it was Fraga’s turn to attack Kohl and a brilliant exit from the final turn on Lap 24 gave him enough momentum to slipstream past Kohl to grab fourth into Turn 1.

All this was irrelevant to Kirkwood who completed a magical season with 12 wins from the 14 races.

Pabst expands team to include Pro Mazda in 2019