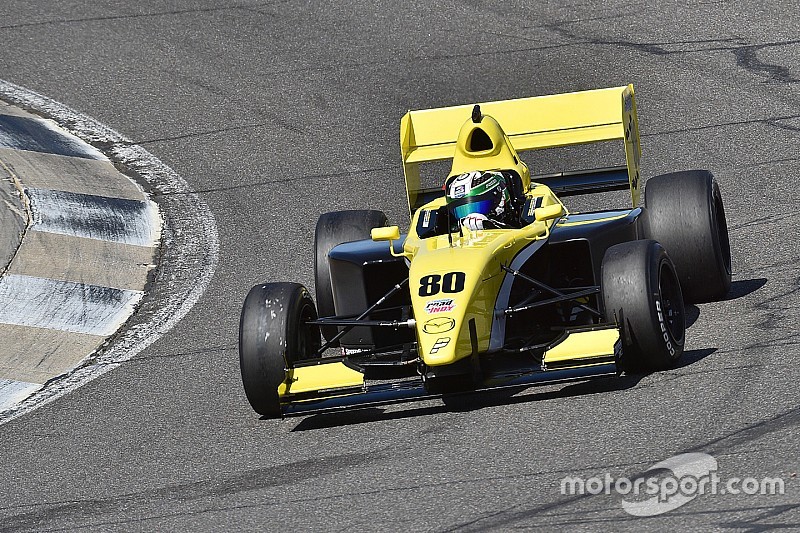 Unsurprisingly, Barber Motorsports Park’s first Pro Mazda race of the weekend was all about Team Pelfrey, but it took an opportunistic move on a restart to send Patricio O’Ward past teammate and polesitter Aaron Telitz.

Telitz had been the only Pelfrey driver on the front row, but Mexican O’Ward zipped past Juncos Racing’s Garett Grist at the start to sit in the wheel tracks of the leader and there the 16-year-old remained until the first lap after a restart on lap 21.

On cooler tires, the teenager carried more speed through the fast sweeping final section and dived to the inside of his teammate to grab the lead for the remaining five laps of the 30-minute race.

O’Ward, who had set fastest lap on his 10th tour of the track while chasing Telitz commented afterward: “I knew I was really, really fast, but I just missed it in qualifying yesterday so I had to redeem myself in this race and I did.

“It feels so great to be able to get this for myself and for Team Pelfrey. It was such a long race that it was difficult to be behind someone, especially on a fast track like this when you have to manage equipment. But the Mazda engine was fantastic and the Cooper Tires lasted all day long so I think I managed it well.

“When I got the yellow, it was definitely ‘go’ time so I hammered it down, which showed the great pace we had.”

To give some idea of Pelfrey’s advantage in this class currently, third-placed finisher Grist lost seven seconds to the Pelfrey duo over those remaining seven laps, although it’s worth considering that he was also busy fending off the third Pelfrey car, that of Weiron Tan.

To his great credit, Grist succeeded by 0.2sec at the checkers, and thus again – as in qualifying – prevented a perfect top-three day for Pelfrey.

Fifth place went to another Juncos car, that of Will Owen, while Cape Motorsports’ Nico Jamin took sixth. This was a fine result for the reigning USF2000 champion, who had sent himself and teammate Jake Eidson spinning on the opening lap after a coming together at Turn 5. Jamin dropped to eighth and battled back, while Eidson finished eighth out of just 10 starters.