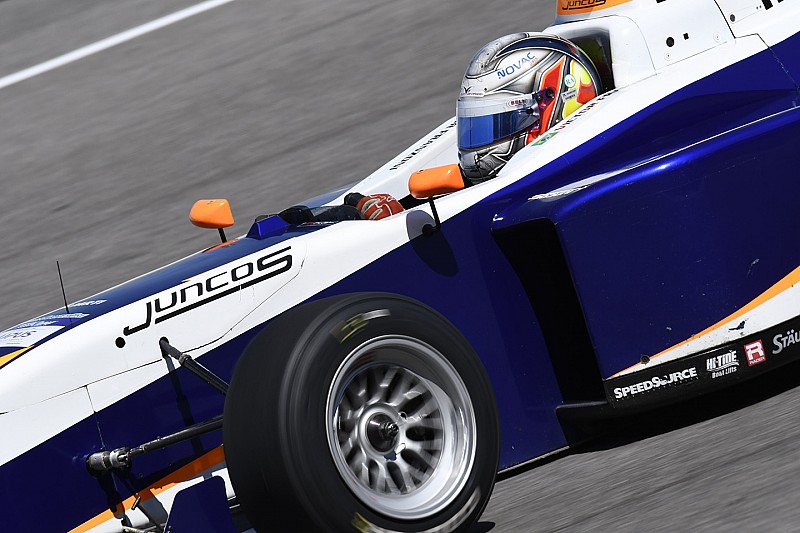 Juncos Racing’s Victor Franzoni has evened things up in the title battle with five-time race winner Anthony Martin of Cape Motorsports, after defeating the polesitter at Gateway Motorsports Park.

What should have been an exciting opening lap battle between polesitter Martin and Franzoni was ruined when they had to restart single-file because Brendan Puderbach and Jeff Green had tangled behind them, bringing out the yellow flag but thankfully not damaging their cars.

At the restart, Carlos Cunha not only led Pelfrey teammates TJ Fischer and Nikita Lastochkin in third, fourth and fifth, he also briefly threatened to pass Franzoni for second.

But soon it came to look like every other Pro Mazda race this year – Martin and Franzoni in a class of their own, with the three Pelfrey cars gradually falling back.

The battle for the lead was frantic in the early stages as Franzoni in low-downforce trim was desperate to get past the leader, and Martin was desperate to keep him back by hugging the inside line and forcing Franzoni to keep trying around the outside.

Finally on Lap 19 the Juncos driver was able to get the job done and started pulling away and that was effectively the end of their race, as the leader piled on fastest lap after fastest lap. Franzoni eventually passed the checkers 4.7sec in front of Martin with Cunha a further 20sec behind and the last unlapped runner.

Seven laps from the end, Franzoni’s teammate Green slotted his car ahead of Lastochkin to grab fifth, albeit 9.2sec behind Fischer.

The championship, which now sees Franzoni two points ahead of Martin, will be resolved in the final two rounds of the season, held at Watkins Glen next week.