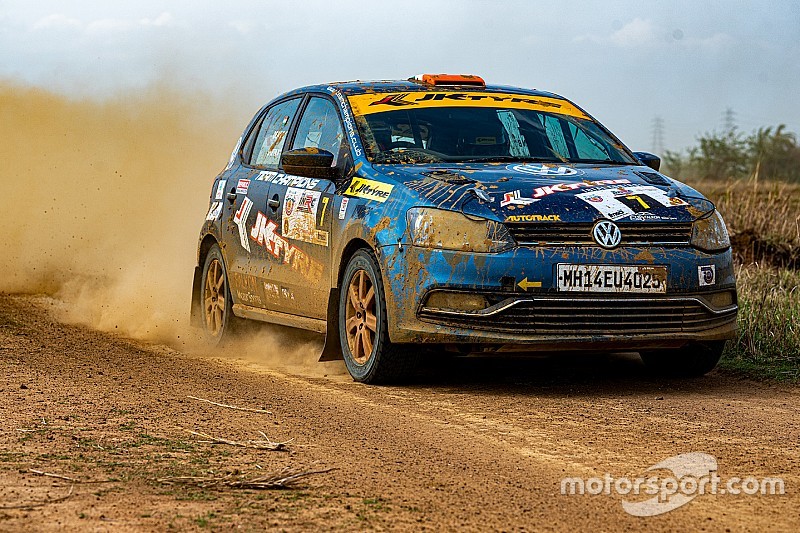 Team Champions’ Dean Mascarenhas claimed victory in the opening round of the Indian National Rally Championship, while factory Mahindra driver Gaurav Gill put on a charging display to claim the final spot on the podium.

Mascarnehas enjoyed a near-10 second advantage after Saturday’s running in South India Rally, and won the rally by an extended margin of 13.6s after the final fix stages on Sunday.

It wasn’t all clean sailing for the former INRC3 champion, however, Mascarenhas having to overcome an underpowered car after losing one of its engine cylinders during leg 1.

“My car had lost one of the four cylinders on Saturday itself and it kept stalling, adding to the pressure,” Mascarenhas said.

"I however held my nerves and came through, making this one of my sweetest wins,” he said.

"Fabid Ahmer finished second, making it a one-two finish for Team Champions as well as Volkwagen - which supplies rally-spec Polo to nearly half the field as part of its customer sport programme.

Mascarenhas was also declared winner in the INRC2 category, while Ahmer likewise the victor in the INRC3 class. The INRC4 honours went to Vaibhav Marate.

Meanwhile, Gill bounced back from Saturday’s struggles to win four of the five stages on Sunday, catapulting himself to third in the overall classification.

Gill had been running in ninth place after Leg 1, but brought his vast international experience to use to end up just 17s behind winner Mascarenhas.

The 37-year-old's impressive drive ensured a podium finish for the new Mahindra XUV300, which was shod with JK Tyres and powered by a petrol engine.

Gill had a brief scare when a herd of cows entered the stage right in front of him, losing him precious team. However, the organiser handed him back 10 second for the incident, meaning he effectively lost no time because of the safety lapse.

“We worked very hard to make up for the lackluster first two days,” Gill said. “We changed the tyres and the setup at every opportunity and it paid dividends until bad luck hit us."

The South India Rally marked the first to be held under new promoter Champions Club, which also enjoys a substantial presence on the grid through its own rally team.