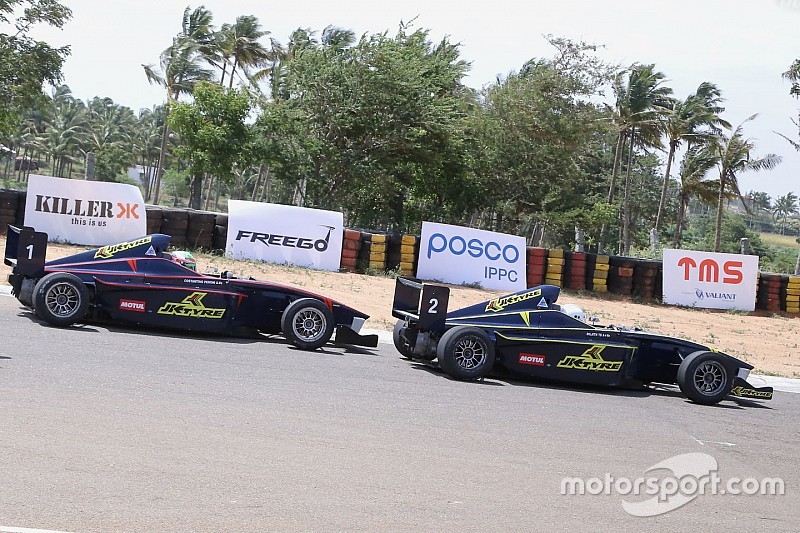 Defending champion Vishnu Prasad took a popular win in the second JK Tyre FB02 race of the weekend in Coimbatore, after pole sitter Akhil Rabindra was penalised for a jump start.

Prasad made a rocketing start and was up into third as the field made its way through turn one. The Chennai-based driver then piled pressure on Ananth Shanmugam, reeling him with 12 laps to go.

While Prasad had no answer to Rabindra’s blistering pace, latter’s 10 second time penalty handed him a clear victory.

Rabindra, in contrast, had to be content with third place, having been dominant all weekend long. His consolation was timing the fastest lap in the race with a time of 1m04.908s.

Sandeep Kumar finished right on Maini’s tail in sixth, with guest racer Costantino Peroni not far behind in seventh place.

VW Polo champions and graduate Karthik Tharani was classified eight ahead of Kolhapur-based Dhruv Mohite. Both of whom also received a 10-second time penalty for a jump start.

Krishnaraaj Mahadik, Akash Gowda and Nayan Chatterjee were the three drivers who failed to make it to the chequered flag.

Rabindra take winning honours in race one of JK Tyre

Rabindra bounces back to win final race of Coimbatore weekend