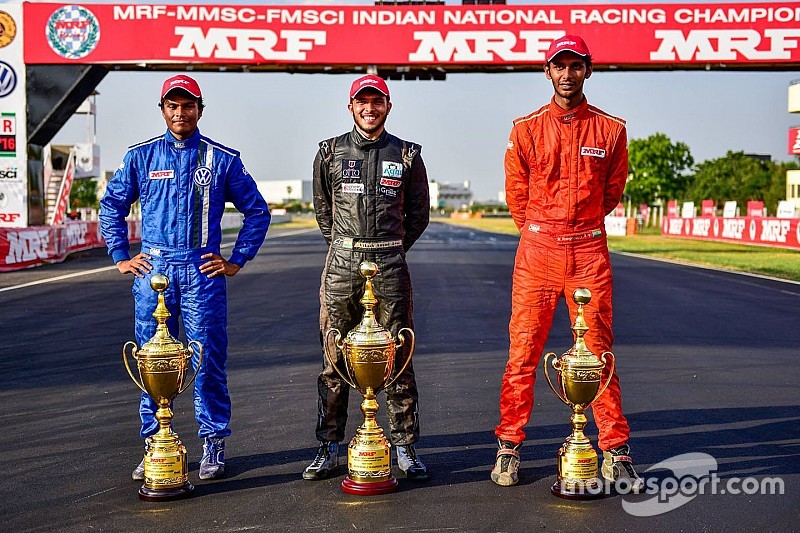 A strong comeback from Vikash Anand unsettled 2015 champion Karthik Tharani enough for the former to clinch his maiden MRF F1600 title, in the 2016 season finale in Chennai.

With Tharani deciding for another go in the F1600 championship, naturally all eyes were on the defending champion to pull off the double.

It all seemed on-track when the Chennai youngster took four wins in the first four races of the new season, but it went downhill then after.

Even with Tharani dovetailing the first round at Madras Motor Race Track with MRF Challenge, the Chennai-based driver had the points lead with two dominant wins in Round 1.

Tharani further solidified his lead with couple of wins in the second round, until Anand showed up. The 22-year-old surprised everyone with pole in his first qualifying itself.

Although Anand took two races to find his ultimate rhythm. But once there, he stamped his authority with two wins - in the races where Tharani tangled with fellow rivals losing big points.

While Anand's luck soared, Tharani's meanwhile nosedived in the next round, after the latter crashed out in qualifying, leading to a back of the grid start.

Thus, Anand made the most of Tharani's luckless weekend, where he failed to finish on the podium in the three races, while Anand eked out two wins.

This brought the 22-year-old right in the title picture, as the top two were tied on points lead, heading into the finale weekend to decide the ultimate champion.

After a topsy-turvy season for both the title contenders, it was natural for the winner to be decided in the final weekend in Chennai.

The momentum was with Anand, but Tharani fought back taking Race 1 win, but it was not enough as Anand eased up winning the next two races, and was ultimately crowned the champion.

With the title win, the Chennai driver won the coveted Mazda Road to Indy shootout shot, while is also subjected for a full-season drive in the MRF Challenge.

Even with Anand coming back after a long gap, he shrugged off the impact of his break, adding how he has used time away from racing to his advantage.

“A year long break is actually not too much. Also, it didn’t really add to any disadvantage for me, it was actually an advantage,’’ he told Motorsport.com.

“During the last two rounds, I came with this mindset of being on top of every session. I’ve been proving that till now [with his late winning-spree],’’ he added.

Tharani would eventually finish 10 points behind, with his form taking a toll since Round 2 - in the eight races, Tharani only managed a sole win with two podiums.

The 2015 champion believed it was his ‘going all-out mentality’ leading to a title loss. "At first the all-race winning intensity helped me with four race wins on the trot, but it led to problems then after,’’ Tharani told Motorsport.com.

"Thinking back, had I calmed down and accepted the non-wins results, I would have won the championship easily,’’ he added.

"When I started to pile the pressure on myself to end every practice on top, every qualifying on pole, and win every race, it created double-thoughts.

"And anything less than that was a huge disappointment. That shift in mentality caused the problems," he said.

While the top two battled in the league of their own, the rest of the pack was led by Raghul Rangasamy, who finished third, having taken seven podium finishes.

The Mahabalipuram youngster came close to take his maiden win four times, but had to settle for second on all occasions.

"When I started the F1600, it was supposed to be my training year and my target was a top five finish," he told Motorsport.com.

"But I managed to get on top of that and go further to finish in the rostrum position. So I am quite satisfied with my performance."

Behind Rangasamy, the 2015 Vento Cup champion Anindith Reddy was the only other driver apart from Anand and Tharani to eke out a race win.

The Hyderabad-based driver who made a switch to single-seater from touring cars, impressed with his quick adaptability. Along with the win, the youngster had six podiums to his name.

And completing the top five was Chennai's Sandeep Kumar who had four podiums and a string of top five finishes, and was always in the fight with the leaders.

Among others, last year's runners-up Goutham Parekh looked to be in the mix until Round 2, but with the pace not as it was in 2015, the Bangalore driver did not race the final two rounds.

With Arjun Narendran unable to make much impact in his second season, Tejas Ram, Brad Dias, Anshul Shah and Chetan Korada, all were able to score handy points, to lock out the lower half of the standings.