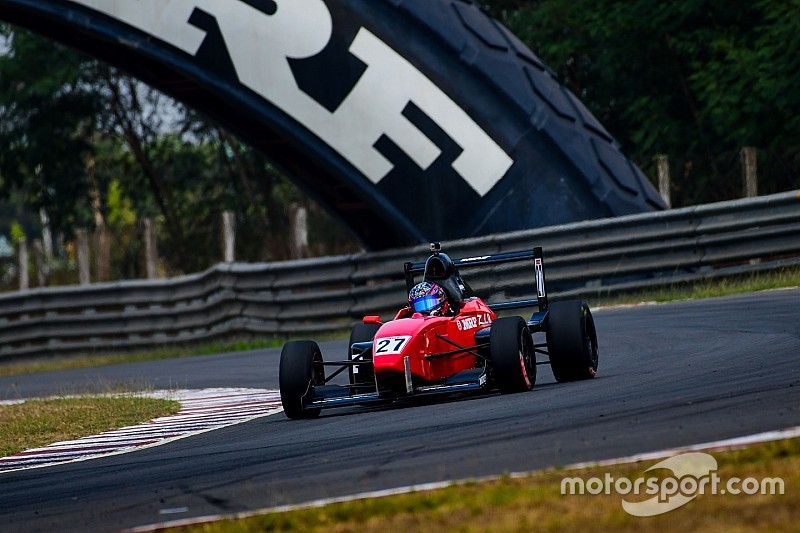 Nayan Chatterjee established an early lead in the MRF F1600 championship with a double victory in the opening round of the season in Chennai.

Following his win in Race 1 on Saturday, the Mumbaikar also ended the final race of the MRF MMSC National Racing Championship weekend on the top step of the podium.

Lee Deegan was the only other driver to win a race, the British driver coming on top in the reversed-grid race 2.

Starting from third on the grid, Deegan passed Sai Sanjay into turn 2 and then assumed the lead when pole-sitter Mihir Barve ran wide off track at the following corner.

Deegan managed to build a decent advantage for himself in the early laps, but came under increasing pressure from Bala Prasath - who dispatched Sanjay on lap 3 - as the race wore on.

On the final lap, Prasath sold a dummy to Deegan on the approach to turn 8, moving across the track at the last moment.

But Deegan had the inside line for the following corner, allowing him to retake the lead and win by a thin margin of 0.695s.

Deegan and Prasath’s battle for the lead brought Sohil Shah and Chatterjee into play heading into the final turn, but neither attempted a risky lunge and settled for position.

Pole-sitter Barve was the only retiree from the race, the Mumbai-based driver pitting after his lap 1 error.

Much like Race 2, the battle for the final race was effectively decided on the first lap.

Pole-sitter Shah was slow off the line when the 10-lap event got underway, allowing both Chatterjee and Prasath to pass him into turn 1.

The trio ran within touching distance of each other in the opening laps, before Chatterjee laid the hammer down and pulled away from the rest of the field, eventually claiming an eight-second victory.

After Chatterjee escaped up the road, Prasath and Shah briefly battled for second position, before the latter ran wide on lap 4 and slipped behind.

Shah made an even bigger error on lap 8 and was lucky not to get overtaken by Singh, who eventually finished just 0.374s behind him when the chequered flag was waved two laps later.

Deegan and Sharma finished fifth and sixth respectively, while Sanjay passed Ali Mohsin late in the race to claim seventh.

Shivakumar and Barve were the two retirees from the race.