Max Defourny and Danial Frost claimed wins in the opening two races of the 2018/19 MRF Challenge season at the Dubai Autodrome on Friday.

Defourny beat Jamie Chadwick to pole position, and built a one-second gap over the former British GT class champion on the first lap of 10 to assume early control of the race.

He let the hammer down on lap 5 double his advantage, before going on to score victory by an extended margin of 2.847s.

Chadwick appeared to fall into the clutches of Frost at the mid-way point, but held on to score her first podium in any category since her victory in the Brands Hatch British F3 round in August. 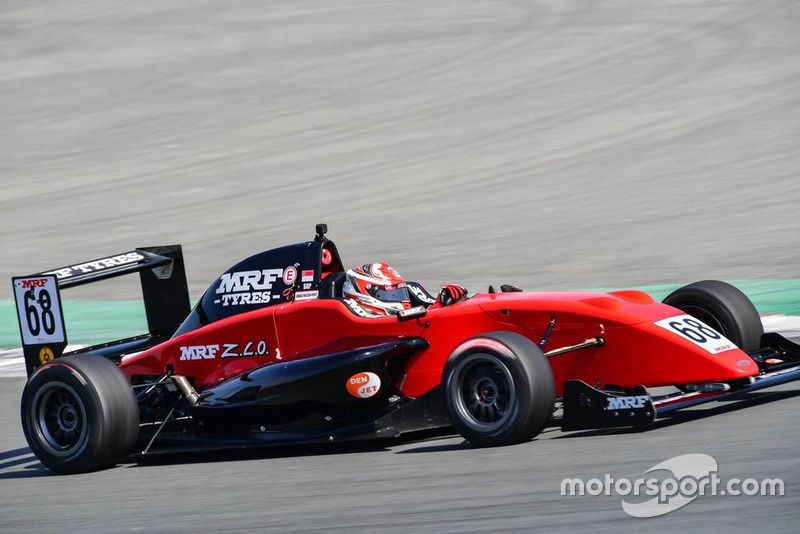 The top-six places were reversed to form the grid for Race 2, with Petr Ptacek assuming pole ahead of Amendola. Defourny and Chadwick started sixth and fifth on the grid respectively.

When the race began, Frost made a blistering start from fourth to take the lead, with Young likewise making an impressive getaway to demote pole-sitter Ptacek to third.

Young subsequently fell down the order, paving way for a thrilling scrap between Ptacek and Race 1 winner Defourny, who had fought his way up to third by lap 3.

Ptacek and Defourny gradually started eating into Frost’s lead while battling each other, but neither could break away or catch the Singaporean for the lead.

Frost eventually won by just over two seconds, with Ptacek beating Defourny to the line by 0.420s to finish second.

Chadwick slipped down to seventh in the early laps but recovered enough to secure fourth ahead of Amendola.

There were no retirements in Race 2, although Finland’s Patrick Pasma had endured a DNF in the opener.