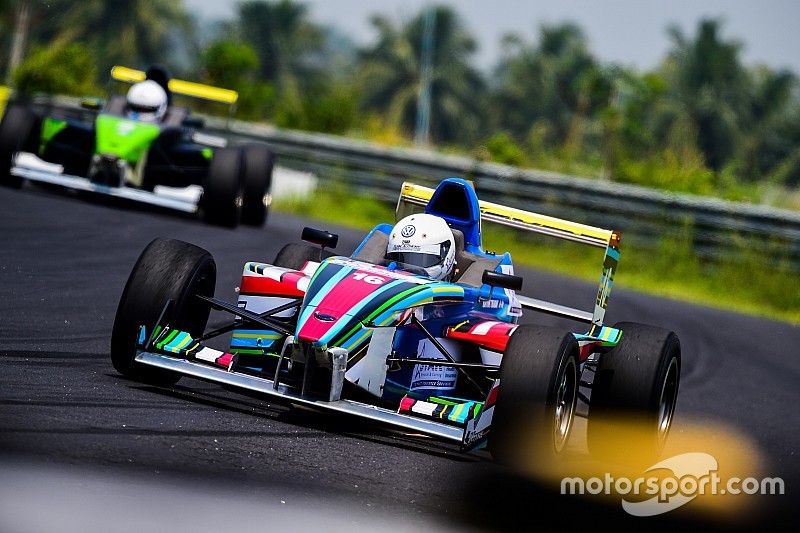 Karthik Tharani beat Nayan Chatterjee in a thrilling duel to score his second consecutive win in the third round of the JK Tyre National Racing Championship.

Tharani started Race 3 in Coimbatore from pole position and built a sizeable gap to second-placed Nirmal Uma Shankar on the first lap alone.

Things turned exciting when Chatterjee passed Uma Shankar for second, setting up a thrilling two-way showdown with Tharani for victory.

Chatterjee closed on the back of Tharani in no time but it took him until lap 14 to be in a position to overtake the chennai-based rival.

But Tharani positioned his car in the middle of the track heading into turn 1, leaving Chatterjee with no way to pass.

Chatterjee made another attempt at the same corner on the final lap, but Tharani smartly covered the inside line, forcing Chatterjee on the outside.

This compromised Chatterjee’s line through the opening sequence of corners, giving Tharani the breathing space needed.

He eventually crossed the finishing line 0.926s clear of Chatterjee - who revealed he was racing with a damaged steering box - to take his fourth victory of the season.

Ashwin Datta, who started this weekend as the championship leader and won Race 1, rose up from fifth on the grid to secure the final spot on the podium

Uma Shankar eventually wound up fourth ahead of Sri Lankan Perera, who endured another difficult race this weekend en route to fifth.

Manav Sharma was the only retiree from the race, the Faridabad-based racer forced to pull across the track on lap 6.