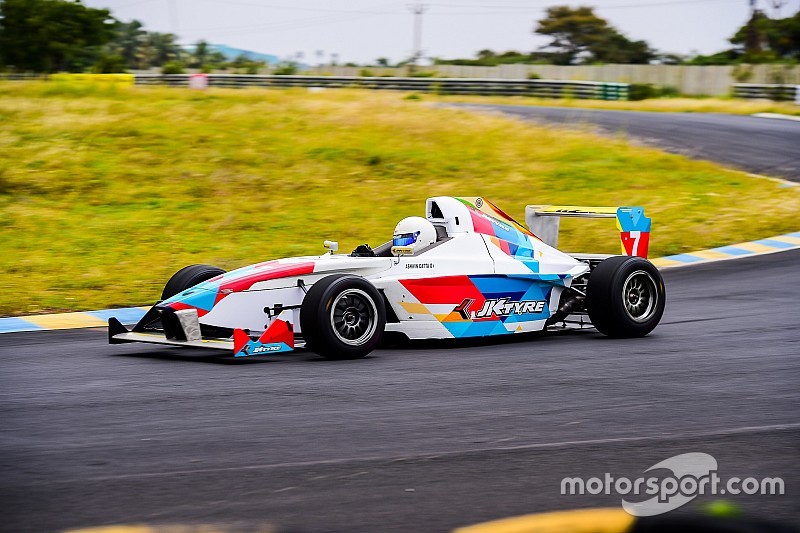 Ashwin Datta inherited victory in the first race of the third round of JK Tyre National Racing Championship after early race leaders Karthik Tharani and Nayan Chatterjee came to blows on lap 5.

Polesitter Chatterjee was slow off the line when the 15-lap race got underway at Kari Motor Speedway, allowing fellow front-row starter Tharani to sprint into the lead.

Chatterjee quickly got back into the groove and started chasing down Tharani, the two circling less than a car lengths away in the first-third of the race.

At the start of lap 5 Chatterjee made a lunge on Tharani at turn 2, but clipped the inside kerb and ran wide across the other side of the track, where another contact with the kerbs pitched his car over in the air.

The damage from the incident proved terminal, forcing him to pull to the side of the track.

Tharani avoided contact with Chatterjee but also ran wide, damaging his car’s suspension and handling the lead to Datta, who went on to take a comfortable 4.292s victory.

Tharani, meanwhile, was forced to fend off Sri Lankan Bryan Perera, who tried several moves to get past the Chennai-based driver.

At one occasion, he dived down the inside of Tharani at turn 1, but simply ran too deep, allowing the latter to hold on to second.

Yash Aradhya finished one second ahead of Mira Erda in sixth, while Manav Sharma, Arya Singh and Chetan Korada completed the top 10.