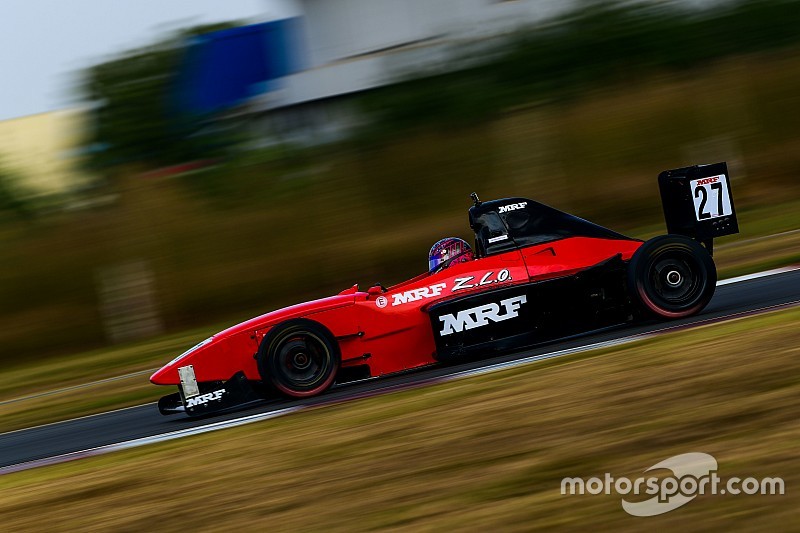 Nayan Chatterjee laid out an ominous warning to his rivals with a dominant lights-to-flag victory in the first race of the 2019 MRF F1600 season.

Chatterjee, who has returned to the flagship category of MMSC MRF National Racing Championship season after a strong end to 2018, claimed pole position by a full second and immediately pulled himself away from the rest of the field at the start of the race.

His extended his advantage to two seconds in the opening two laps alone, eventually claiming victory with an impressive margin of 9.281s.

While Chatterjee was unchallenged out front, there was a three-way fight for the runner-up spot. Arya Singh, Sohil Shah and A.Bala Prasanth all ran neck-to-tail from the very beginning of the race, with Shah eventually grabbing second after overtaking front-row starter Singh on lap 5.

Singh also came under pressure from Prasanth, but managed to hold him by a margin of 0.439s to secure the final spot on the podium.

Manav Sharma finished fifth, five seconds adrift of the leading quadruple, while Lee Deegan and Sai Sanjay were classified sixth and seventh respectively, separated by half a second.

Shahan Ali Mohsin was the only retiree from the race, the karting graduate pulling his car across the track on lap 2.