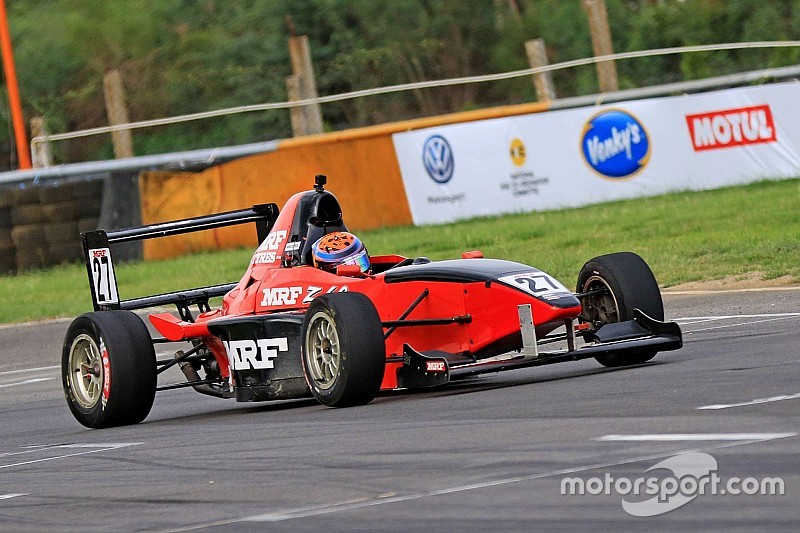 Nayan Chatterjee romped to victory in the opening race of the MRF F1600 title decider in Chennai.

Chatterjee qualified on pole position for the first of the three races and was quick off the line, preventing any chances of a turn 1 lunge from fellow front-row starter Raghul Rangasamy.

He built a one-second buffer within the first two laps and then began to edge further clear, setting the fastest lap on the final tour to win by a dominant margin of 3.346s.

Rangasamy, who headed to this weekend as the points leader, had no answer to Chatterjee's pace and had to settle for second, but crucially ahead of title rival Goutham Parekh.

Parekh attempted to make a move on Rangasamy on the second lap but couldn’t keep up with him thereafter, eventually finishing over three seconds behind in third.

Arya Singh was next up in fourth while Nirmal Umashankar held off Yash Aradhya to secure fifth, the two drivers separated by just 0.315s at the flag.

Sandeep Kumar’s title hopes took a big blow after he slipped to seventh early on - and he was unable to get past the fighting duo of Umashankar and Aradhya, losing precious points to championship rivals Rangasamy and Parekh.

The MRF F1600, part of the MRF MMSC National Racing Championship, enjoyed healthy number of entries again, with 14 drivers lining up on the grid for Race 1.