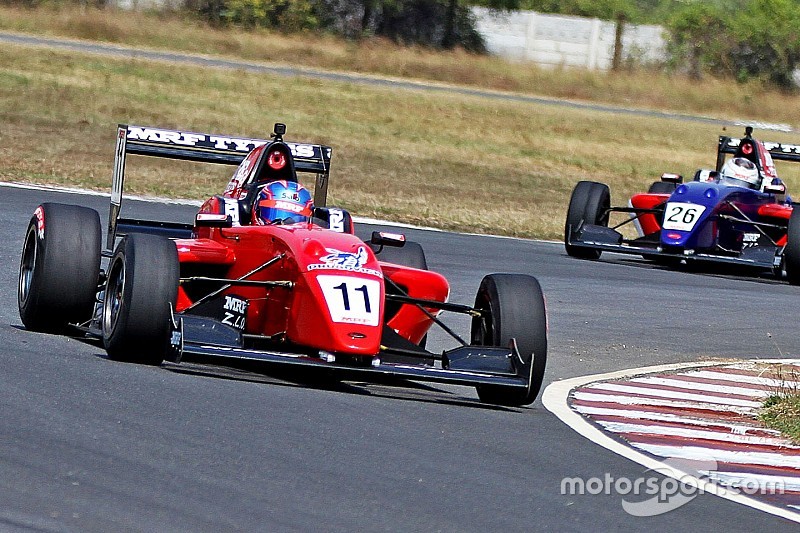 MRF Challenge 2017/18 champion Felipe Drugovich claimed a dominant victory in the penultimate race of the season in Chennai.

At the start of the race, polesitter Presley Martono held the lead from Drugovich, but the Indonesian’s perfect start was undone by the safety car, deployed after Kurt Hill and Nazim Azman spun on their own on lap 1.

Martono’s restart was less stellar when the SC period ended on lap 4, allowing Drugovich to close right behind him. The two ran nose-to-tail for the first two sectors, before Drugovich reeled in Martono with a brilliant move on the outside to take the lead.

Martono then had to immediately turn his attention to Rinus van Kalmthout, but the Dutch driver was unable to take advantage of the F4 SEA champion’s lost momentum and stayed in third.

Van Kalmthout, in fact, briefly dropped behind Julien Falchero, but got him back a few corners later to launch another attack at Martono.

Despite getting his nose alongside at several occasions, van Kalmthout was never able to pull off a move and crossed the line in third place, less than a second behind Martono.

Van Kalmthout and Martono’s race-long rivalry allowed Drugovich to claim an easy win, his ninth of the season.

Behind the leading trio, Danial Frost and Louis Gachot finished in fourth and fifth positions respectively, both overtaking Falchero in the early stages of the race.