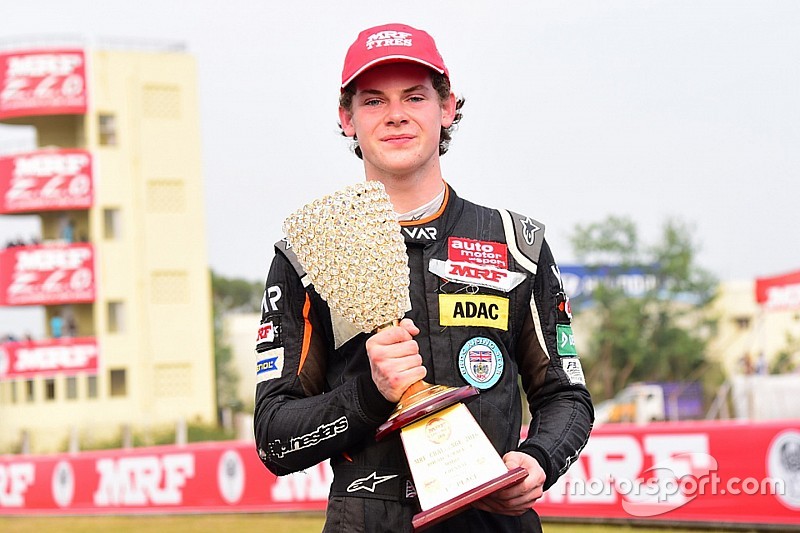 Harrison Newey is crowned the 2016/17 MRF Challenge champion after winning the final race of the season at the Madras Motor Race Track.

Starting on pole, Joey Mawson got off the line cleanly in the lead, while front-row starter Mick Schumacher lost a place to Harrison Newey going into Turn 1.

The race was immediately neutralised when Ralf Aron collided with Red Bull junior Neil Verhagen, the Estonian's car flipping over into the run-off area.

Upon the race restarting, Mawson held the lead from Newey and Schumacher, all three closely stacked for the laps to follow.

The Australian had it under control until Lap 11, when he made a slight mistake, which was enough for Newey to make the lunge and sneak through to take the lead.

Mawson's troubles weren't over as Schumacher went past the reigning German F4 champion, pushing him down to third and putting the Aussie in firm danger of losing the title he had looked favourite for all throughout the season.

Newey's title success was then sealed when the British driver clocked the fastest lap of the race on his final lap as he tied on points with Mawson - both ending up on 277.

Having won seven races in the season, Newey was declared the champion courtesy of more wins than Mawson, who had only three to his name.

Behind the top three, Juri Vips fended off fast-charging Felipe Drugovich all-through the race to finish fourth, the Brazilian having to settle for fifth.

Another debutant, the F4 SEA champion Presley Martono, was eighth as Yoshiaki Katayama and Manuel Maldonado completed the Top 10.