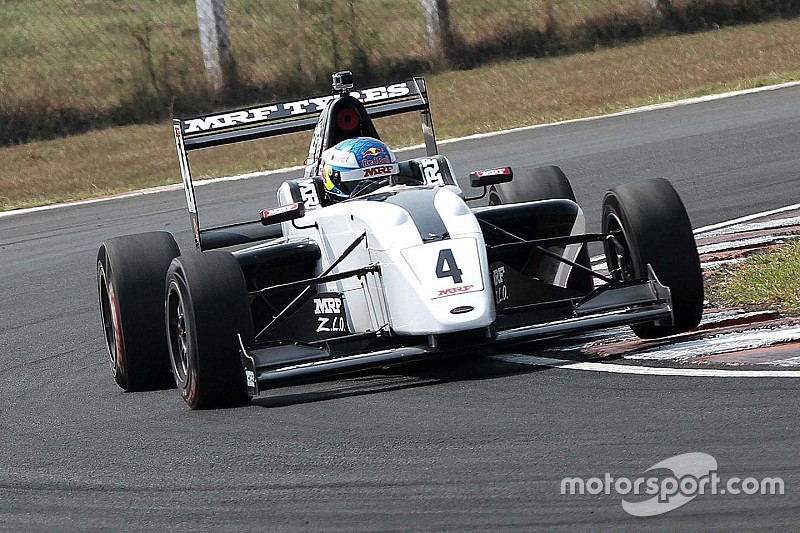 Harrison Newey took victory in the first race of the MRF Challenge season finale at Madras Motor Race Track, closing the gap to leader Joey Mawson in the standings.

Newey made a clean start from pole, while front-row starter Mick Schumacher lost out to Ralf Aron, who slotted into second going into Turn 1.

Red Bull junior Dan Ticktum was also slow off the line, which allowed both Aron and Juri Vips to go through, as the British driver dropped to fifth in the order.

While Newey held on to the lead in the front, Aron came under immense pressure from Schumacher, the German eventually passing the Estonian on Lap 7 to retake second.

In the end, Newey eased off to claim his fifth win of the season, taking him to a total of 213 points. The European F3 driver now sits only 12 points behind Mawson. Schumacher is a further 22 away.

Mawson had a fighting race finishing fifth, having started from seventh on the gird. He first cleared Felipe Drugovich and then set his sights on Ticktum.

The duo were involved in a feisty battle mid-race, with Mawson eventually coming out on top on Lap 10, scoring crucial points to keep the lead in the standings.

Behind the top six, Brazilian Drugovich was seventh after surviving contact with Dylan Young, which dropped the Australian down to 12th in the order.

The American lost a place after spinning on his own to evade the incident between Drugovich and Young.