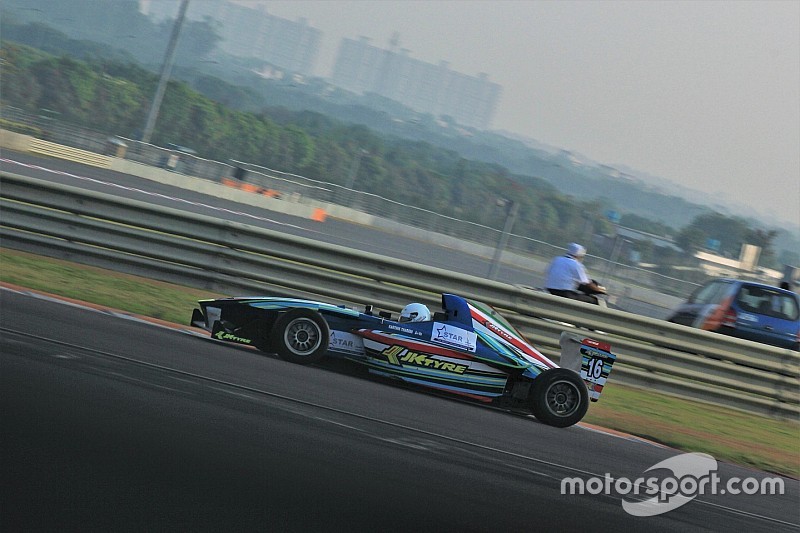 Karthik Tharani claimed the 2018 JK Tyre National Racing Championship title after chief rival Nayan Chatterjee was wiped out by Manav Sharma in a dramatic finale at the Buddh International Circuit.

Chatterjee started sixth in the final race of the season, one place behind Tharani, but made a better start of the two to jump into third place.

But on the start of lap 2, Sharma outbraked into turn 1, slamming into the back of Chatterjee and throwing the title protagonist out of the race.

With his main rival out, Tharani had the option of playing it safe through till the end of the race. But he instead went on the attack mode, closing on the back of race leader Bryan Perera and second-placed Yash Aradhya after the Chatterjee/Sharma-induced safety car period ended.

Aradhya passed Perera on the outside of turn 4, but Tharani got a better run into the next corner, passing both of them in one move to take the lead.

Behind, Perera dragged Aradhya to the finishing line, with the latter holding on to second by just 0.098s.

Guest racer Kush Maini was running as high as third, but was eventually classified seventh ahead of Sudarshan Rao.

Apart from Sharma and Chatterjee, Mira Erda and Arya Singh also suffered DNFs in the race. Singh had a particularly dramatic retirement, the Kolkata-based racer going airbone after running over the grass on the back/straight.